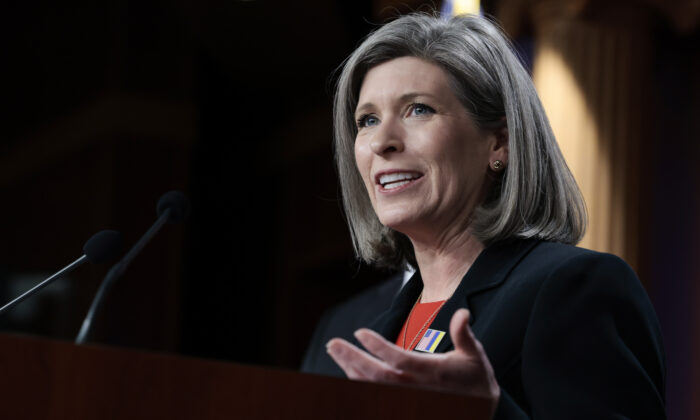 Executive branch officials who fail to follow federal laws guaranteeing public access to government documents would have to answer to a newly created director of openness in government (DOG) in the White House under a proposal introduced by Sen. Joni Ernst (R-Iowa).

“Iowans, and all Americans, have a right to know what’s happening in Washington, but without proper supervision, our transparency laws are often more bark than bite,” Ernst said in a statement announcing the proposal.

“As autocrats around the world, from Russia to China, try to crack down on citizens’ freedom of information, my bill will ensure here in America we open our government to the public and the officials we pay with our tax dollars fully comply with our transparency laws.

“Sticking up for the taxpayer and holding government officials accountable might not make me a lot of friends inside the Beltway, but you know what they say: ‘If you want a friend in Washington, get a dog.’”

If the Ernst proposal becomes law, it would accomplish three things, the Iowa Republican said during a March 15 Senate floor speech:

Also covered by the DOG would be the Federal Funding Accountability and Transparency Act of 2006 (FFATA), disclosure requirements for federal grant recipients, multiple transparency regulations under the federal budget process, and the Infrastructure Investment and Jobs Act.

The FFATA’s primary sponsors were then-Sens. Barack Obama (D-Ill.) and Tom Coburn (R-Okla.). The law required the federal government to establish a website, USASpending.gov, that would make available most federal spending to the public. The site has often been criticized since its creation for failing to be user-friendly or to provide all of the information required by law.

The new position would be located in the White House Office of Management and Budget, the president’s primary management tool for directing executive branch funding and policy operations.

During the floor speech describing her reasons for introducing the proposal, Ernst cited the refusal of a New York nonprofit, EcoHealth Alliance, to disclose information about its federally funded activities in conjunction with the Wuhan Institute of Virology in China in gain-of-function research related to the CCP virus, which causes COVID-19.

“EcoHealth also evaded a number of federal transparency laws requiring the disclosure of how our tax dollars are being spent. As a result, we still aren’t entirely sure how much of our money was sunk into subsidizing the unsafe, state-run lab in communist China,” Ernst told the Senate.

“Folks, we really deserve the answer, and if EcoHealth won’t cooperate voluntarily, then that information will be obtained with subpoenas when Republicans are back in control of Congress. You can mark my words.”

A spokesman for the New York-based EcoHealth Alliance didn’t respond by press time to a request by The Epoch Times for comment on Ernst’s vow.

Ernst announced her proposal during “Sunshine Week,” the week of events organized around the birthday of James Madison in commemoration of his work in drafting the Constitution and the Bill of Rights, including especially the First Amendment. Madison also was the most prolific author of “The Federalist Papers,” the highly influential series of newspaper articles that helped secure the adoption of the Constitution by the states.

“Too often, laws can be more bark than bite if no one is watching to make sure they are being enforced,” ” Ernst said. “There has been a dramatic increase in the number of FOIA information requests that have not received responses within the required time. Government spending data that is required to be made publicly available is inaccurate, incomplete, and even unreliable. And taxpayer-funded projects that are required to display the costs are not doing so.”

“We believe that transparency revolutionizes U.S. public policy,” Adam Andrzejewski, chief executive officer and founder of OpenTheBooks.com, said. “There is a war on transparency within the federal agencies and this legislation helps to reestablish the constitutional and executive-level importance of the people’s right to know.”

Similarly, Liz Hempowicz, director of public policy for the Project on Government Oversight, said: “Continued progress on government transparency requires the continuous oversight. This bill creates a point person within the administration with the primary responsibility to ensure that agencies and officials are meeting the transparency requirements set by Congress. A transparency czar will hopefully cut through any bureaucratic red tape and make transparency an ongoing priority.”