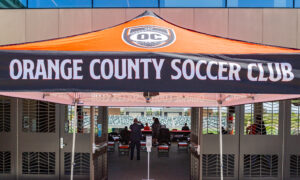 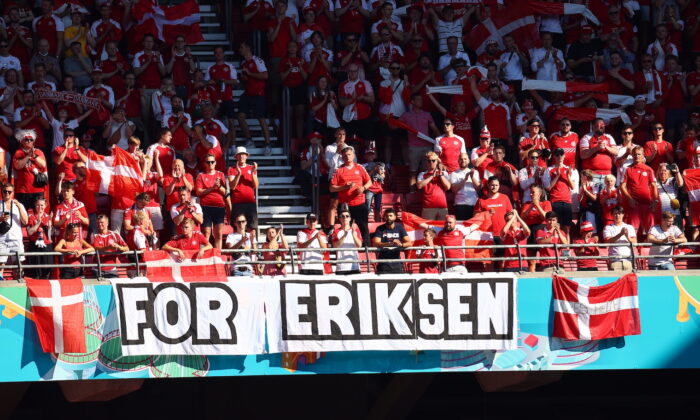 Denmark supporters display a banner for Christian Eriksen, the Danish player who collapsed during the match against Finland last Saturday, June 12, prior to the Euro 2020 soccer championship group B match between Denmark and Belgium, at the Parken stadium in Copenhagen, Denmark on June 17, 2021. (Wolfgang Rattay/Pool via AP)
Soccer

COPENHAGEN—Christian Eriksen was discharged from the hospital on Friday and immediately went to visit his Denmark teammates nearly a week after suffering cardiac arrest during a European Championship match.

The Danish soccer federation wrote on Twitter that Eriksen was released from the Rigshospitalet in central Copenhagen after a successful operation. The federation previously said Eriksen would be fitted with an ICD, an implantable device that can function as both a pacemaker and defibrillator.

“The operation went well, and I am doing well under the circumstances,” Eriksen was quoted as saying in the tweet.

The 29-year-old Eriksen has been in the hospital since collapsing on the field during his team’s opening Euro 2020 match against Finland on Saturday. His heart stopped and he had to be resuscitated with a defibrillator.

A tribute was held for him during Denmark’s second game against Belgium on Thursday, when play stopped after 10 minutes for a minute’s applause in the stadium.

The Danish federation said Eriksen went to see the team Friday at its training base in Helsingor, outside Copenhagen, and would then go home to spend time with his family.

”It was really great to see the guys again after the fantastic game they played last night,” Eriksen said in the tweet. “No need to say that I will be cheering on them on Monday against Russia.”

Denmark lost its first two games but still has a chance to advance to the round of 16 with a win over Russia in its final Group B game.