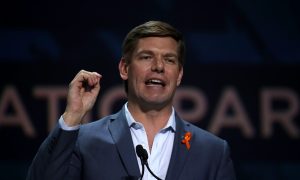 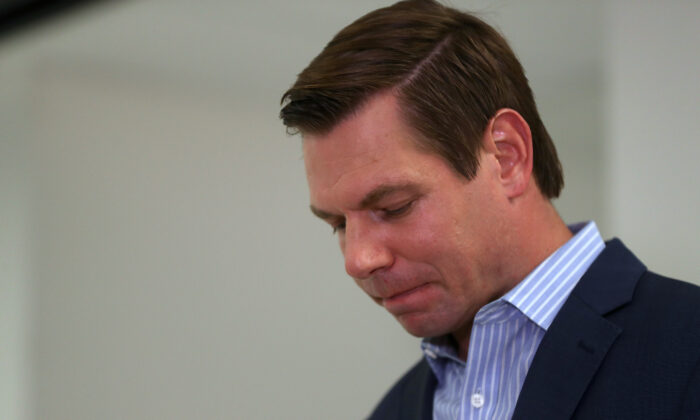 Swalwell Projects His Experience of Being Compromised Onto Trump Campaign

A report earlier this week revealed that a suspected agent of Chinese intelligence had cultivated the mayors of American cities and other local politicians, including one former council member of a small San Francisco Bay Area town who is now a member of the U.S. House of Representatives, Eric Swalwell.

The alleged spy, Fang Fang, who also went by Christine Fang, raised money for Swalwell’s 2014 congressional campaign and arranged to place an intern in his office. She had romantic affairs with at least two of her targets. Swalwell, a married father of two, refuses to say whether he was among those she honey-trapped.

With the revelation that Swalwell’s reelection efforts were helped by a Chinese spy, it’s worth reconsidering his part in the Democratic Party’s “Russia collusion” chorus. For nearly four years, Swalwell claimed he’d seen “strong evidence of collusion” showing that Trump was an agent “working on behalf of the Russians.”

In an article posted on his official website, Swalwell claimed that “President Trump and his team are directly and indirectly tied to Russia.” According to Swalwell, “Trump and his team are conscious of their guilt. … It is not normal for the leader of our country to be so extensively tied to a foreign government that has sought to undermine democracies across the globe, and connections like these should be concerning to American citizens everywhere.”

In a March 2017 Intelligence Committee hearing on Russia and the Trump campaign, Swalwell enumerated the “ways that a foreign adversary can seek to influence a person.” “Financial,” he said. “Romance.” “Compromise.”

What previously looked like manic Russiagate conspiracy-mongering purposed to get the boyishly handsome 40-year-old favorable coverage from the collusion media now takes on a different color. Did Democrats use Russia collusion as a defensive weapon to ward off scrutiny of their own party’s ties to foreign powers? For instance, substitute the Biden family for the Trump team, then the lurid accounts of foreign cash, foreign prostitutes, and kompromat alleged in the Hillary Clinton campaign’s infamous dossier make a little more sense.

Further complicating matters is Swalwell’s membership on the House Intelligence Committee. Without any experience in intelligence matters, he was appointed to the committee in only his second term—or right after Fang helped raise funds for his reelection. Why did House Speaker and San Francisco Bay Area neighbor Nancy Pelosi put him in a place where the most urgent and sensitive matters of U.S. national security would cross his desk after he’d been targeted by a foreign intelligence operation? It would be good to get answers—if only the top men at the FBI hadn’t spent the past four years, just like Swalwell, poisoning the U.S. public with the Trump–Russia conspiracy theory.

The Swalwell affair underscores how difficult it is to protect the United States from what Director of National Intelligence John Ratcliffe describes as the No. 1 threat to national security: Beijing’s efforts “to dominate the U.S. and the rest of the planet economically, militarily, and technologically.” So why is China on the verge of overwhelming our defenses? Because of our own leadership.

Fang was a student at California State University, East Bay, and thus, like countless other Chinese intelligence officers, she was using the cover provided by U.S. universities, tech companies, Congress, and the State Department. Chinese spy services don’t have to threaten or compromise U.S. institutions to get visas when our corporate, political, academic, and cultural elite figure it’s good not only for them but for the United States itself to open our doors to a foreign power determined to “dominate” America.

The real No. 1 national security threat isn’t Chinese intelligence, Chinese tech, and financial sectors, or even its increasingly powerful military. Rather, it comes from a U.S. elite that draws its wealth and power from its relationship with the Chinese Communist Party.

Consider the case of another former Bay Area mayor targeted by the Chinese. In 2013, Sen. Diane Feinstein was alerted that CCP intelligence had recruited a staffer who’d been with her for 20 years, during which time she’d sat on and chaired the Senate Intelligence Committee. After the story broke two years ago, Feinstein said that her former employee “never had access to classified or sensitive information or legislative matters.” She was missing the point—on purpose, it seems.

Feinstein wasn’t being spied on, she was being handled. She was mayor of San Francisco in 1978 when she first met then-mayor of Shanghai Jiang Zemin. She spoke openly of their friendship, and thus rationalized his atrocities after the Tiananmen Square Massacre. Jiang became leader of China in 1993, roughly when the spy began working for Feinstein, but Chinese intelligence didn’t have to coerce her to make the case for granting China permanent most favored nation status. The fact is, because a rising China was in her self-interest and that of her investor husband with a large China portfolio, she said it was good for America, too.

The rhetoric, assessments, and expenditures detailed to address the threat of a rising China are destined to miss the mark unless U.S. leadership takes a closer look in the mirror. America’s China problem is our own establishment’s relationship with the CCP.