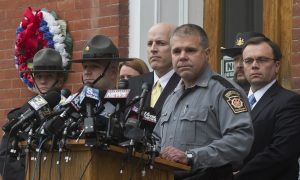 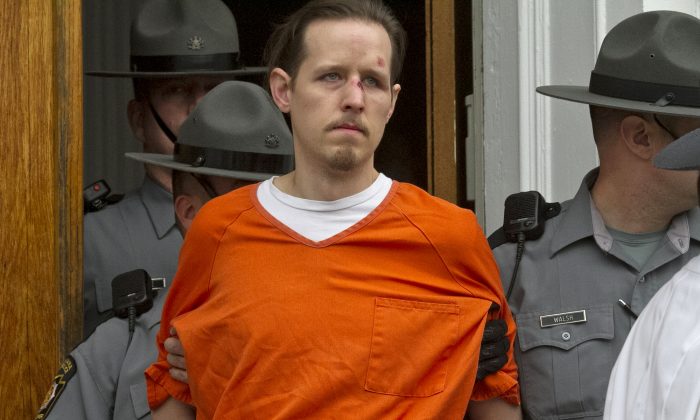 Eric Frein, charged with the murder of Pennsylvania State Trooper Cpl. Byron Dickson and critically wounding Trooper Alex Douglass, is taken to prison after a preliminary hearing in Pike County Courthouse in Milford, Pa., on Oct. 31, 2014. On Thursday, Nov. 13, 2014, authorities added terrorism charges againstFrein and they say he told them he wanted to "wake people up." State police say Eric Frein called slaying of Cpl. Bryon Dickson an "assassination" in an interview after his capture. (AP Photo/The Scranton Times-Tribune, Michael J. Mullen)
Crime and Incidents

BLOOMING GROVE, Pa.—The man accused of opening fire on a Pennsylvania State Police barracks admitted killing a trooper because he was dissatisfied with government and wanted to “wake people up,” according to court documents filed Thursday that provided the first indication of a possible motive.

Eric Frein spoke of wanting to start a revolution in a letter to his parents and called the slaying of Cpl. Bryon Dickson an “assassination” in a police interview after his Oct. 30 capture, the documents said.

State police charged Frein on Thursday with two counts of terrorism. He already faced first-degree murder and other counts in the Sept. 12 ambush, which killed Dickson, seriously wounded another trooper and sparked a 48-day manhunt in the Pocono Mountains.

Prosecutors are seeking the death penalty for Frein, who appeared by video at a brief hearing at which state police filed the additional charges. He has not entered a plea.

On the night of his capture, Frein waived his right to remain silent and told police in an interview at the barracks that he had shot the troopers “because he wanted to make a change (in government) and that voting was inefficient to do so, because there was no one worth voting for,” according to a criminal complaint. “The defendant further acknowledged taking action (shooting the troopers) to wake people up because it was all he could do.”

Court documents filed Thursday also included a letter, which authorities say was written by Frein and was addressed to “Mom and Dad,” that said revolution “can get us back the liberties we once had.”

“Tension is high at the moment and the time seems right for a spark to ignite a fire in the hearts of men. What I have done has not been done before and it felt like it was worth a try,” said the letter.

Frein, 31, also apologized to his parents, writing, “I am just not a good son,” according to documents.

Police found the letter on a storage drive inside an abandoned airplane hangar that authorities believe Frein used as a shelter. The letter was created on Dec. 29, 2013, and was last accessed on Oct. 6, 2014, while Frein was on the run, the documents said. Police have said Frein had a laptop with him.

Authorities, meanwhile, say they’re not worried that Frein’s confession could conceivably be challenged by defense attorneys.

Police refused to tell Frein that his family had hired an attorney for him the night he was captured, according to defense attorney James Swetz, who said he was prevented from seeing Frein at the barracks.

“I was told, ‘He’s an adult and has not asked for a lawyer,'” Swetz recounted earlier this week.

District Attorney Ray Tonkin has cited Pennsylvania Supreme Court precedent that says police aren’t required to tell a suspect that an attorney is seeking to speak with him or her. A more recent state court decision, however, said the Supreme Court had not “eliminated the possibility” that a defendant’s due-process rights could be violated under similar circumstances.