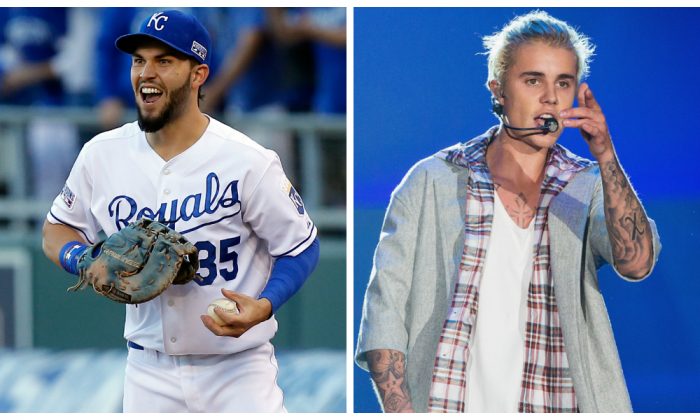 As it turned out Wednesday night it looked like a draw as Bieber/Royals teenaged-female-fans got to see both, with the popular first baseman taking in a Bieber concert. FYI, there’s plenty of video evidence to show that girls are just as crazy about the Royals’ 26-year-old Gold Glover as much as the 22-year-old Canadian singer/songwriter.

The video below shows Hosmer mobbed by teenage girl fans as he left Bieber’s concert at the Sprint Center in Kansas City, Mo. Fans shared photos and videos from the interaction on Twitter.

When Hosmer walks out of the Justin Bieber concert… pic.twitter.com/8jioeazn8j

The 6-foot-4-inch Hosmer has been the Royals first baseman since 2011 and has won Gold Gloves each of the past three seasons. A decent bet to make the All-Star team this year as his star has been on the rise for a while, Hosmer helped lead Kansas City to back-to-back AL pennants, a division title, and a World Series championship in 2015.

Opening Day: Why We Love It

Though the Royals’ season started with a 4–3 Sunday night win over the New York Mets—the team they defeated in five games in last year’s World Series—the team has had three off-days this week, as is often the case the first week of the season with the weather still in question.

Clearly Eric Hosmer is a big deal, check him walking out of a Justin Bieber concert. (h/t @huntersanders88) pic.twitter.com/VW8I9XaepI

may not have gotten a pic with Justin Bieber but at least I got several with Eric Hosmer!! pic.twitter.com/tWS36nhXq8

Meanwhile for Bieber, it’s not often that a fan in attendance is nearly as popular as him.

SNUCK DOWN TO THE 5th ROW FOR JUSTIN BIEBER AND TOUCHED ERIC HOSMER BEST DAY EVER pic.twitter.com/fTdz8kO0Eo

Hosmer looked like a good sport about the whole thing, though the mobbing may have eventually overwhelmed him, as this picture seems to suggest.

Eric Hosmer went to a Justin Bieber show and was mobbed by Hosmer-loving crowds. https://t.co/hI9NifCReB pic.twitter.com/OSnYTorAA6