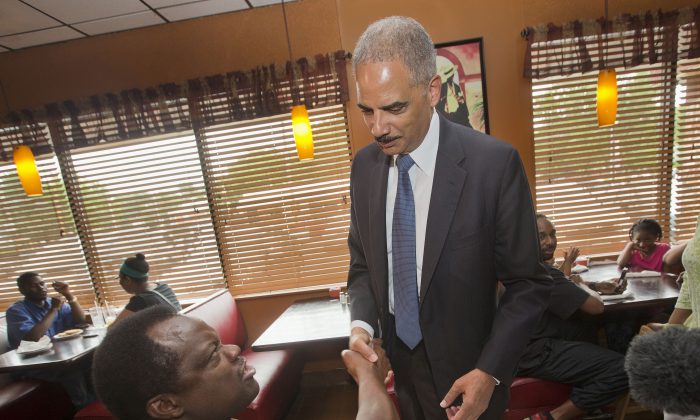 Attorney General Eric Holder stops to shake hands with a patron at Drake's Place Restaurant, before his meeting with local community leaders, Wednesday, Aug. 20, 2014 in Ferguson, Mo. Holder arrived in Missouri on Wednesday, a small group of protesters gathered outside the building where a grand jury could begin hearing evidence to determine whether a Ferguson police officer who shot 18-year-old Michael Brown should be charged in his death. (AP Photo/Pablo Martinez Monsivais, Pool)
Life & Tradition

Eric Holder, the US Attorney General, did not organize riots for gangs in Ferguson, Missouri.

However, an article published on satire website National Report has tricked many on Sunday. The National Report posts fake news that often attempts to rile up conservatives and Republicans.

The bogus article reads: “Eric Holder’s career has survived a long list of scandals; The 2008 Black Panther debacle, overturning Arizona’s immigration laws and ‘Fast and Furious’ immediately spring to mind. These, however, pale in comparison to the recent allegations against Holder, the likes of which could easily land the Attorney General behind bars.”

Holder traveled to Ferguson, Mo., last week amid riots and protests over the fatal shooting of Michael Brown, an 18-year-old unarmed teenager.

The National Report used to have a disclaimer that said it was satire.

But a recent and real editorial from the National Report outlined what the website is trying to do after it got a negative reaction about a fake story of a NYPD officer shooting a baby. “Satire is not required to be humorous, nor was this particular post meant to be funny,” it says.

It adds: “The people of the modern world need to understand and develop the ability to corroborate information and not just accept information as true without further inputs.  Absolutely baseless information is spread by ACTUAL news sources on a daily basis and have resulted in a serious divide without our country.”