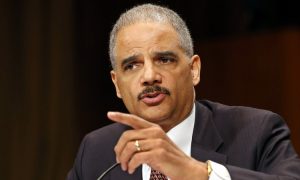 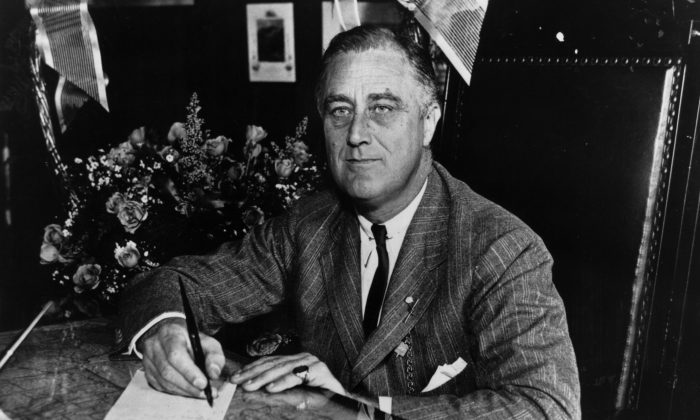 President Franklin Delano Roosevelt (1882 - 1945) is shown in 1936. In 1937 he proposed a scheme for packing the Supreme Court. (Keystone Features/Getty Images)
Politics

Former Attorney General Eric Holder recently said the next president from the Democratic Party should increase the number of justices from the current nine now sitting on the Supreme Court, to combat what he calls Republicans’ “power-grabbing antics.”

The former Obama-era cabinet member now serves as chairman of the National Democratic Redistricting Committee, a political action committee that claims “the political system is rigged,” and “the fight to fix it is now.”

Roosevelt had wanted to expand the high court bench, because the court struck down as unconstitutional various pieces of legislation implementing his New Deal policies that expanded the reach of the federal government. Members of his own party in Congress ultimately revolted at the audacious perceived overreach, and the attempt failed.

But Democrats are becoming increasingly enamored of the idea of filling the Supreme Court with sympathetic left-leaning justices. For example, Democratic presidential hopefuls Sen. Kirsten Gillibrand of New York and South Bend, Indiana, Mayor Pete Buttigieg say they are considering the court-packing proposal.

Holder and many Democrats are still angry that the GOP-controlled Senate refused to vote on President Barack Obama’s nominee to the Supreme Court, Judge Merrick Garland of the U.S. Court of Appeals for the District of Columbia Circuit.

Notably, the Constitution assigns to the Senate the role of “advice and consent” on judicial nominations, but doesn’t require that body to hold a vote on nominees.

Democrats nowadays still frequently refer to the seat Gorsuch now occupies as one that was “stolen” from Democrats by Republicans who failed, in their view, to fight fair. And they claim that the never-corroborated allegations of sexual impropriety against Trump’s second Supreme Court nominee to be confirmed, Justice Brett Kavanaugh, were never properly investigated.

Holder, who has decided not to run for president in 2020, said that if he were president, he would “seriously consider adding two seats to the Supreme Court to make up for Mitch McConnell‘s power-grabbing antics.”

But conservatives have long been suspicious of Holder’s motives. Critics have characterized Holder as power-hungry, accusing him of twisting the law to benefit liberal causes and promoting racial polarization for political gain.

They note that Holder’s tenure as Obama’s attorney general was scandal-ridden. After refusing to comply with a congressional subpoena that required him to hand over internal Justice Department documents related to the “Fast and Furious” gun-running scandal, on June 28, 2012, the House of Representatives voted 255–67 to cite him with contempt and 258–95 to pursue a civil contempt case against him in court. This was the first time a sitting cabinet member had ever been held in contempt by a chamber of Congress.

“Holder has always been a specialist in power,” Adams told The Epoch Times.

“Sometimes, he uses race to accumulate power and advance radical policies. Now, he is willing to jettison longstanding American tradition to circumvent sound jurisprudence he doesn’t like.”