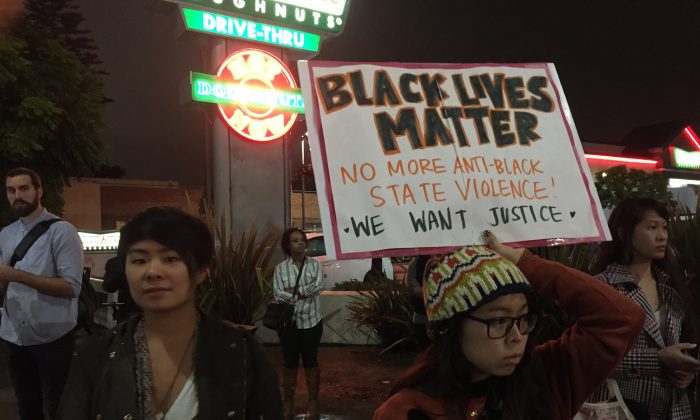 Demonstrators in Leimert Park, a neighborhood in Los Angeles, California on Dec. 3, 2014 after the announcement that white a police officer involved in the death of black New York resident Eric Garner would not be indicted. (Sarah Le/Epoch Times)
US

LOS ANGELES—A group of some 50 protesters gathered in the rain at the Leimert Park area of Los Angeles on Wednesday to show their solidarity with protesters in New York.

They were repeating the dying words of a black man who was killed by a white police officer who put the man in a chokehold in Staten Island, New York on July 17. The man was reportedly peddling cigarettes at the time and his death was caught on camera.

The chokehold maneuver had been banned by the police department in 1993.

On Wednesday, it was announced that the police officer would not be indicted for any crime regarding the incident.

“I am not saying that there aren’t some people who should be arrested who are resisting arrest, but there’s a way to do everything, and the way the police are doing it now, they have no accountability to anyone,” said Carolyn Rose, a black resident of the area who is in her 70s.

“There are many of us who believe that this is illegal,” said Trudy Goodwin, another protestor.

Goodwin said she was shocked to hear the news of no indictment, in a place as progressive as New York.

“I was devastated. I can honestly say it went beyond stunned. I was paralyzed,” she said.

“This is a very bleak day for Americans.”

In Los Angeles, a similar story that took place shortly after Brown’s death has caused protests since August. Ezell Ford, a black, 25-year-old, mentally ill resident of South Los Angeles was shot by white police on Aug. 11 while unarmed and allegedly lying on the ground. A decision is pending on whether to charge the police officer in this case.

“Today is just a continuation of many other days and many other months and many other years of the racist policing and the murder by law enforcement,” said Homid Khan, a member of the Stop LAPD Spying Coalition and the Los Angeles Community Action Network.

Police departments in Los Angeles and New York have recently announced plans to equip officers with body cameras. But after the results of the Eric Garner case, many question how helpful video footage will be in settling disputes over police action.