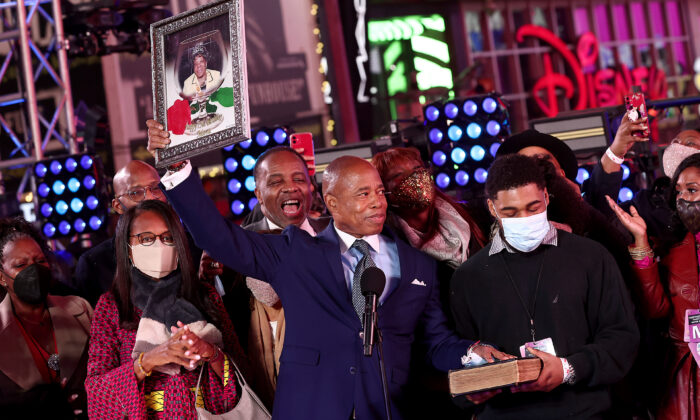 Adams, 61, took his oath of office in Times Square after the ball dropped, signaling the New Year had arrived. Both he and his wife wore masks despite the event being outdoors, though he removed his for a period of time.

Adams did not deliver a speech or answer questions from reporters.

During an appearance shortly afterward on “Dick Clark’s New Year’s Rockin’ Eve with Ryan Seacrest,” Adams told Seacrest he had a few parties to attend but that he would “be up early in the morning, working for the city of New York.”

About 15,000 people gathered in central Manhattan for the event, about a quarter of the usual crowd.

Adams won a contested Democratic primary race for the mayor’s office, which de Blasio, a Democrat, had to vacate due to term limits.

Adams was the president of the Brooklyn borough and once served in the New York Police Department.

He campaigned on police reform, improving city schools, and getting illegal guns off city streets, describing himself as a progressive Democrat.

For now, Adams is continuing many of his predecessor’s policies, including a raft of COVID-19 vaccine mandates.

New York has one of the strictest regimes in the country, imposing mandates on children as young as 5 to go out to eat and forcing all private employers of any size to require vaccination.

Courts have so far upheld the mandates.

Adams told reporters in a briefing Thursday that he has a multipronged plan to curb COVID-19, the disease caused by the CCP (Chinese Communist Party) virus. Even with the strict rules, New York has seen record-highs in case numbers and an increase in hospital admissions with COVID-19. Adams’ main focus is on getting people vaccinated and boosted.

Adams has vowed not to shut down the city and said the Times Square event was important.

“Even in the midst of COVID, in the midst of everything that we’re going through, this is a country where hope and opportunities is always, ever present,” Adams said on stage before midnight Friday.

“It’s just great when New York shows the entire country of how we come back,” he added. “We showed the entire globe what we’re made of. We’re unbelievable. This is an unbelievable city and, trust me, we’re ready for a major comeback because this is New York.”

De Blasio, meanwhile, is expected to announce soon whether he will run for governor of New York. The ex-mayor had hinted repeatedly he would but said he wouldn’t reveal his plans until after he left office.