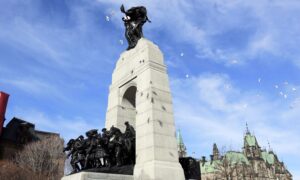 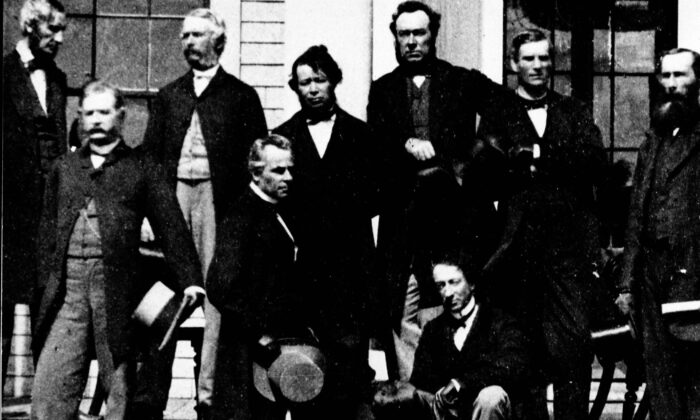 Several of the Fathers of Confederation are shown at the Charlottetown Conference in September 1864 where they gathered to consider the union of the British North American Colonies. Sir John A. Macdonald (R) and Georges Etienne Cartier are in the foreground. (National Archives of Canada-PA-091061/The Canadian Press)
Canada

Isaac Teo
Isaac is a reporter based in Toronto.
View profile
biggersmaller
Print

As the trend of removing symbols of Canada’s past and renaming buildings and streets grows, historians warn of the consequences of attempts to misrepresent or erase the country’s history.

“The aim of those who want to control the past by either obliterating it or attaching shame to those who cling to the past, is a desire to clear the public space, to wipe it clean of symbols, and mythology, and narratives and replace it with something else.”

The vandalism or tearing down of statues of historical figures—often as authorities take little action—has seen an upsurge in recent months, as has the removal of several statues of Canada’s first prime minister Sir John A. Macdonald, or renaming buildings named after him, at the direction of politicians at the city level.

In the latest development, the City of Toronto said it will review 60 streets named after historical figures to see if they should be changed. The decision came after councillors voted to rename Dundas Street, named after Scottish politician Henry Dundas, due to his connection with the transatlantic slave trade. The Dundas name will also be removed from any public buildings displaying it.

Patrice Dutil, a professor of politics and public administration at Ryerson University and a history expert, has been outspoken against the misrepresentation of key historical figures such as Macdonald and the namesake of his university, Egerton Ryerson.

“There’s no doubt that there are activists, that they are challenging the narrative of Canadian history,” Dutil said in an interview.

“When we have a new narrative that challenges the understanding of the past, we have to be very careful, and I think that the people who want us to change our history need to be much more modest.”

Bowler notes that revising history is a normal part of the academic process for historians.

“We look at what our predecessors have written and we might bring a new interpretation to it, or we might find new facts,” he said. “I’m not worried about revision, but it’s the falsifying and the obliterating that’s the danger.”

Bowler cites several examples throughout history where tyrants or tyrannical systems have rewritten history to suit their own agenda, especially every time there’s been a significant revolution.

“Take the French Revolution of the 1790s when they killed the king and established a republic. They abolished all previous time, they started at year one. So out with 1792, because that was the Christian dating system, and in comes year one of the revolution. Pol Pot and the Khmer Rouge did the same thing. Mussolini’s fascists started dating from the year of Mussolini’s takeover.”

He says the gradual erasure of Canada’s past over time allows those with certain interests to impose their agenda on society.

“A nation cannot function without a memory.”

In some cases, historical incidents are in dispute due to a difference in what contemporary politicians present and what historians say actually happened.

In May, Prime Minister Justin Trudeau formally apologized for the internment of around 600 Italian-Canadians during World War II, and for the tens of thousands who were declared “enemy aliens” by the government. But some historians pointed out that the majority of those interned were card-carrying members of the Italian fascist party, and deserved to be interned.

Dutil says historians have documented in detail that only “very few, maybe a few dozen Italians were arrested without good reason.”

“Italian-Canadian professional historians have investigated this issue, and they demonstrated that the Canadian government did the right thing,” he said, referring to the findings from the book “Enemies Within: Italian and Other Internees in Canada and Abroad.”

Published in 2000 and edited by Italian-Canadian historians Franca Iacovetta, Roberto Perin, and Angelo Principe, the book argues that claims Canada was waging a “war against ethnicity” at the time “drew on selective evidence and glossed over the fascist past of some Italian-Canadians.”

But designating people as enemy aliens who had to report regularly to the RCMP was a “draconian measure,” and the government should apologize for that, he said.

In the case of Macdonald, Bowler says he was both a great man as well as a flawed figure.

“His vision made us who we are today. It’s incredible to take a barren, half continent and make a model nation out of it,” he said. “On the other hand, he was a drunk, he was corrupt, and he had all of the typical opinions of an educated man of the 19th century. I have no difficulty in holding both in my opinion.”

Macdonald is being targeted due to his government’s role in initiating the residential school system and other indigenous-related policies.

Dutil says that after the settlers came to North America, they wanted to teach the indigenous peoples their language and about a Christian God. What Macdonald wanted was to make education more structured through the residential schools.

“With time, it became more abusive, and there is no doubt that terrible things happened in residential schools. Because the government of Canada did not want to spend money, if a child died in a residential school, there was nobody to pay for this child’s body to be returned to his family,” he said.

“My point is that Canadian history, like all history, is complicated, and we cannot simply say that Canada is a racist society, that Canada’s past should be removed, should be ignored, because it is only a racist past. It’s much more complicated than that.”

Dutil says there is no denying that Canada had racist policies in the past, and that racist tendencies exist to some degree in Canadian society today, but it is unfair to say that Canada is racist.

“We denied Chinese immigration in the 1920s, but over 60 years later, Canada opened its arms to immigration from Vietnam, the boat people. That’s an important part about Canadian history, which is a society of progress, a society that is constantly improving.”

David Haskell, an associate professor in the Liberal Arts faculty at Wilfrid Laurier University, says putting the focus exclusively on some “evil” acts committed in the past in Western countries such as Canada and ignoring the broader history is at the heart of the issue.

“The problem is that this is not representative of the history of those countries,” Haskell said in an interview.

“If we were truly representing the history of these countries, we would see that overwhelmingly, their historical trajectory has been toward freedom and rights for everyone. It’s so unbelievable to me that people can live in Canada and experience the freedom that they have, and not recognize that it didn’t just spring out of nowhere.”

Canada and other Western countries have reached the point where “we see each person as worthy of having equal rights,” and this means the majority of decisions that were made in these countries’ history have been the right ones, Haskell said, adding that promoting the contrary departs from the facts.

“The fact that educators today and media today are trying to convince people that the majority of decisions were not the right ones flies in the face of what we experience when we walk down the street, when we go to vote, when we are able to not be oppressed by tribal warfare.”

Dutil says the danger with presenting only a one-dimensional view of the past of a country like Canada is that people will no longer feel they are part of the society and care about it. It also erodes trust, which is essential.

“If we change the narrative, if we adopt a narrative that only emphasizes racism, then there will be nothing for society to stick together. … There has to be a story that brings out what we have in common so that people can say, ‘Yes, I belong in this society. This country is something that I care about, this is a country that has been fair, has been just, has been prosperous, and I want to make it better,'” he said.

“At the end of the day, it’s what makes society work—that we have a society where people still trust each other, not always, but we’re still a society of trust. And I’m afraid that if we’re a society that only talks about racism, we will lose that trust.”

Bowler says “it’s a threat to democracy” if a small group of activists are allowed to silence debate and make decisions on behalf of all Canadians.

“Who is making these decisions? Civil servants? School boards? People who are panicked by media reports that are one-sided and inflammatory?” he says.

“Civilization is fragile. Democracy is fragile. It’s a set of rules that keep these things functioning, and if you change the rules, you’re asking for trouble. And one of the rules has to be civil dialogue, the ability to discuss things without losing your job, without demonization, without being silenced,” he adds.

“Canadians have to decide whether or not they are are interested in knowing the truth of the past or being content to go along with the new socially mandated narrative.”

Isaac Teo
Isaac is a reporter based in Toronto.
TOP NEWS