Era of Defunding Police Is Over: New York Governor Hochul 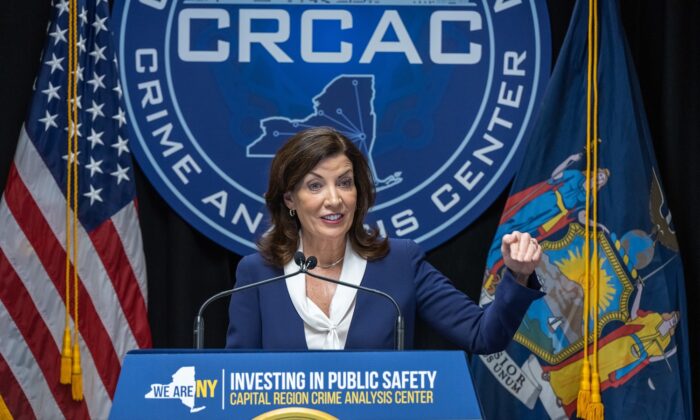 Speaking at a press conference at the Capital Region Crime Analysis Center (CRCAC) in Albany, Hochul noted: “We’re not defunding police; we are really ramping up funding for police. So, all that era is over.”

The governor made the remark after touring the recently upgraded facility, which is one of 10 such centers across the state that provides local law enforcement with crime analysis, information, and investigative support.

Praising the technology at the center’s disposal, Hochul announced plans to expand the network of facilities to New York City and proposed increases in funding for the state’s Gun Involved Violence Elimination Initiative and its district attorneys’ offices.

“There is no greater obligation than ensuring every New Yorker can live in safety, and that has always been my number one priority,” she added.

Hochul has been critical of efforts to defund the police in the past, including last July at the New York State Association of Chiefs of Police Annual Conference, where she pledged her support for law enforcement.

“No one will ever say the words ‘defund the police’ in my presence,” she said at the July 26 event in Glens Falls. “That is not going to go anywhere. You’re not going to make friends with me if you say that.”

Sparked in May 2020 by the controversial death of George Floyd in Minneapolis, the movement to defund the police spread across the nation to major cities like Los Angeles, Chicago, and New York, where the city council voted to decrease the police department’s budget by $1 billion.

But while Hochul might be confident that the defund movement has met its end, others say the damage it inflicted lives on.

In a recent interview with The Epoch Times, Kyle Reyes, executive director of Law Enforcement Today, said he felt he was witnessing the “death spiral” of law enforcement in the U.S.

Recalling the riots that broke out across the country in the wake of Floyd’s death, Reyes noted that in many cities, officers were required to stand by and watch as their cities were destroyed.

“We saw criminals walk away with no charges under the guise of freedom of speech,” he said.

Such leadership, Reyes said, as well as heightened public criticism and a flawed justice system, has been driving officers to leave the force.

“They are overstressed, under-compensated, and perceive no backing from their leaders,” he said.

And nowhere is that more evident than in New York City, where, in 2022, 3,701 police officers retired or resigned from the force in the biggest exodus since 2002, according to the New York Post.

Further, as the police force dwindles, crime in the city has been on the rise. In 2021, the city recorded 264 homicides—the highest number in a decade. And while that total dropped to 253 in 2022, spikes in grand theft and felony assaults have overwhelmed the officers who remain on the job.

“The city is bleeding blue and I think the blue line will get thinner,” retired NYPD Sgt. Joseph Giacalone told the New York Post. “At this rate, continued public safety weighs in the balance. I’d be more concerned at the resignations than the retirements. Cops are leaving for better pay, benefits, and working conditions.”

Meanwhile, psychologist and retired U.S. Army Lt. Col. David Grossman said that the figures were unsurprising and evidence of a “malignant” problem.

“A civilization that sees the crooks as the good guys and the cops as the bad guys cannot survive,” he told The Epoch Times in a recent interview.

Urging communities to come together in support of their local law enforcement officers, he added: “Nobody becomes a cop for the money. They become a cop because they truly want to make the world a better place.”