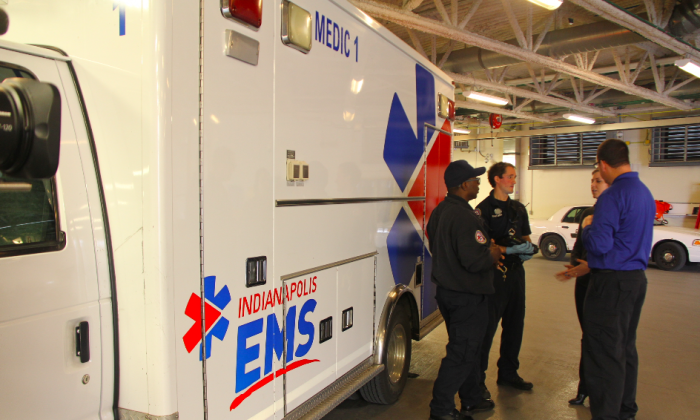 WASHINGTON—A typical scenario looks like this: A 911 call comes in, then emergency services arrive on the scene, determine it’s an overdose, and administer the opioid-blocker Narcan. The patient is then transported to the emergency room.

Once in the hospital, it’s common for emergency physicians to keep an eye on the patient while busy taking care of other emergencies like heart attacks, traumas, and strokes.

The patient might get some literature on addiction and treatment options before being discharged. This patient is now at an extremely high risk of dying within one month, according to a study carried out by Scott Weiner, an assistant professor at Harvard Medical School.

“The opioid overdose patient, who sobers in the hallway, is offered a detox list, and then is discharged, has a 1 in 10 chance of being dead within one year. And their highest risk is within the first month,” Weiner said at an opioid panel discussion at the annual American College of Emergency Physicians (ACEP) conference on Oct. 30.

Emergency room physician Dr. Krista Brucker wants the health system to react to overdoses in the same way they do heart attacks.

“The team would be different, but the idea is, you send out a page and activate everybody and they have to be there within 15 minutes—and then the patient is immediately linked with ongoing care,” she said on Nov. 1. “And hospitals [should] get measured on how quickly they can get a patient from their overdose into treatment.”

“If we were all ranked and sorted based on it [getting overdose patients to treatment], and reimbursed, it would incentivize hospitals to take this more seriously,” she said.

As Brucker saw overdoses pile up in Indianapolis, she responded by helping launch Project Point, an initiative set up in 2016 to help bridge the gap between the emergency department and treatment.

“I landed in this by accident. I love emergency medicine and I fell into this because I really couldn’t believe that this was the best we could do for patients,” she said. Patients surveyed by Project Point have overdosed seven times each, on average, she said.

Brucker and the Project Point staff meet with overdose patients while they’re still in the emergency department. Last year, after the project launched, they talked to 84 people. This year, so far, it has been 323 people.

“It’s both sad and very good,” said Brucker. She finds out their stories, including any childhood trauma they suffered, educates them on naloxone (commonly known as Narcan), and tests them for HIV and hepatitis C.

“We then try and link people into ongoing treatment after that intervention in the emergency department is complete,” she said.

Forty-five percent of those patients go on to visit some type of treatment center.

“And if we can get them to their first visit, half of them make it to three visits,” she said.

Brucker also discovered that about 55 percent of the Project Point patients have a mental health illness, or have been treated for one in the past. She advocates for a whole build-out of the behavioral health system.

“For me, the opiate, the whole epidemic, the whole problem, is a symptom or several symptoms of some underlying pathology that if we ignore and band-aid over, we do so at our own peril, because it will come back again,” she said.

“Even if you put every single person who uses heroin today into the best treatment for them, even if the system were perfect, you’ve still ignored a huge part of what fueled it, and so it will come up again, in some other way.”

“I wish I could tell you that opening up a bunch of Suboxone clinics would fix the problem—which is what I think a lot of people are hoping,” Brucker said.

Suboxone is a medication commonly used to treat opioid addiction. It is a combination of buprenorphine (an opioid) and naloxone (which blocks the effects of opioids). Suboxone has been used in opioid addiction treatment since 2002. Methadone, the other main medication-assisted treatment, has been around for decades, while naltrexone (commonly known as Vivitrol) is fairly new.

Some hospitals are administering Suboxone in the emergency department, but most don’t—even if patients want it.

“My experience in Indiana … is that patients really want it and we’re trying very hard to open the door to treat them, but we’re still really limited [in the number of] providers who can and will prescribe it,” Brucker said.

Even if you put every single person who uses heroin today into the best treatment … you’ve still ignored a huge part of what fueled it, and so it will come up again, in some other way.
— Dr. Krista Brucker, medical director, Project Point

Very few doctors have the required X-waiver from the Drug Enforcement Administration to prescribe buprenorphine.

“It would be easy to get more ER doctors waivered (lots of people are working on this), but in most places there is nowhere for these patients to follow up (not enough treatment capacity),” Brucker said. “So even if I write a three- or seven-day supply, you need someone to pick that person up and continue their care—and most health systems across the country don’t have that capacity right now.”

She said it is very difficult to quickly get a patient onto either methadone or buprenorphine, or long-acting naltrexone. And addicts who are faced with the choice of coping with the immediate onset of a cold-turkey withdrawal or shooting some heroin, will most often choose the latter.

“That’s why I think the health system really has to adapt because we have to lead with medicine, and we have to be there when the patient is ready,” she said.

In a recent survey of emergency physicians nationwide, 57 percent said there is an inadequate amount of detox and treatment centers, and 87 percent said the problem with opioids was either increasing or remaining steady in their location.

In Indiana, for example, there are six or seven addiction psychiatrists for the entire state, Brucker said.

“And they’re all maxed out in terms of capacity,” she said. “So even if the health system wants to start, let’s say, a really high-quality opioid treatment program, finding the staff—from physicians to nurses to social workers—it really is hard.”

When President Donald Trump declared the opioid crisis as a nationwide public health emergency on Oct. 26, he pledged to broaden access to treatment, including overturning an old federal rule that prevented states from accessing Medicaid funding for residential treatment facilities that have more than 16 beds.

The declaration will expire on Jan. 24, 2018, unless the president reauthorizes it.

But, Brucker says, the system has to take it a step further than just preventing deaths. “It’s an emergency and people are dying, and our first job is stop people from dying. But to not ask the next questions seems particularly sad,” she said.

“If you’re talking about helping people address all of their other co-morbid mental health issues … then that requires a much larger build-out of behavioral health infrastructure.”

And not just for opioid addiction.