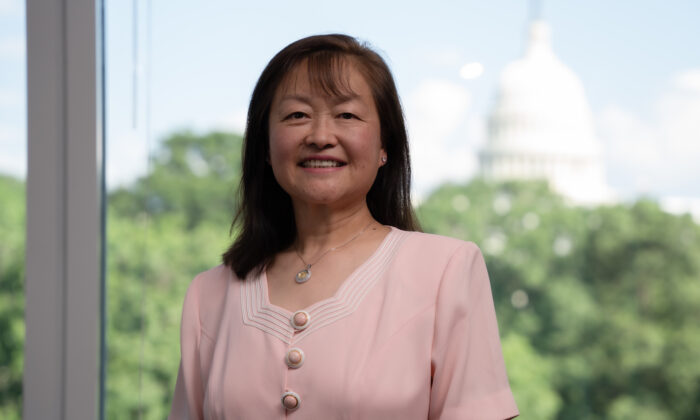 Equity Is Not Possible Without Total Government Control: Survivor of Chinese Communist Revolution

Americans must unite to defeat the Marxist takeover of the country, she said
By Masooma Haq

Lily Tang Williams is a survivor of communist China’s Cultural Revolution and is now a congressional candidate for New Hampshire’s 2nd District. Williams calls America a promised land and said she chose to emigrate to the United States for freedom, but she’s seeing a disturbing trend toward totalitarian Marxist ideology.

Williams warns that she sees the push for “equity” or social justice as a guise for socialist wealth redistribution.

“Now I notice socialist policies, and today, everybody is talking about ‘equity, equity.’ How can you have equity—which is equal outcome, which I heard in China before—without the government using force to redistribute wealth?” Williams said during an Aug. 18 interview for EpochTV’s “American Thought Leaders” program.

In 1988, Williams immigrated to the United States determined to succeed because she did want to return to communist China. Since that time, she has lived the American dream with a happy marriage, three children, and a good business, she said. Williams never had plans to get into politics.

But because she sees the disturbing trend toward communism, she said she felt compelled to join the government to stop the destruction of Americans’ Constitutional rights.

Williams questions why every institution—from universities and public schools to the federal government, private corporations, and the U.S. military—is teaching equity.

“And our kids don’t know,” she said. “Maybe that’s why they want socialist policy. They want … free college and free health care and free child care and everything free, because they’re entitled to it.”

She said shutting down schools and churches and toppling statues of American leaders all resembles communist ideology, and the same things happened during China’s Cultural Revolution. In addition, the curriculum being used in schools to divide students by race and make one group an oppressor and the other oppressed is also Marxist, she said.

“I really feel like I’m reliving another Cultural Revolution,” she said, also mentioning the critical race theory being taught in schools to divide people and demonize white people over something they can’t control.

A Taste of Totalitarianism

Williams has seen many other aspects of totalitarianism during the last two years of lockdowns and mandates.

“I see this rise of authoritarianism. We have politicians who want to be our tyrants. They want to shut you down. They want to force your business [to] close in the name of [the] pandemic, and then mandate—mandate the vaccine, mask. And if you don’t comply, you can lose your job,” she said.

Williams warns that communism is coming to America if the country continues down this road of dividing people and pitting them against each other.

“I see the writing on the wall. I see this trend,” she said. “We are using identity politics to divide citizens and get our citizens to fight each other instead of [being] united with each other to solve our country’s problems.”

“Why are Western democratic countries taking Communist Party’s tactics and the shutdown methods from their playbooks?” said Williams.

Williams said that cancel culture is similar to being targeted during the Cultural Revolution.

“They can find something you wrote, something you said many years ago, and then demonize you as ‘oppressor,’ ‘black class.’ You lose your job.”

The equity trainings where white people are supposed to denounce their “white privilege” are similar to the struggle sessions in communist China, Williams pointed out.

“We should not judge people by their skin color, and by race. But that’s what they want to do all day,” she said. “What is the difference? Chinese were divided by classes, by political opinions, and by economic status. Here it’s by skin color and by race.”

She objects to people being given preferential treatment because of their skin color, instead of merit. Williams cited the fact that Ivy League universities are filling quotas for black students at the expense of Asian students, who work hard and earn their place at these schools.

The State Before Family and Tradition

William also disapproves of the transgender ideology that children are being indoctrinated with in schools, and in many cases without parental knowledge or consent. The state is overriding the rights of the parents, as in the case of some states that are introducing legislation to bypass parental consent for gender changes at the age of 13.

She said she is reminded of China’s Cultural Revolution, where everyone was constantly indoctrinated with communist ideology in all public forums. From media to schools, they all espoused Mao’s ideology of the oppressor and oppressed having to struggle against each other.

Her family was labeled the “red” class, or one of the oppressed groups, while land owners and intellectuals were labeled the “black” classes.

“And all religions were demonized. We could not call ourselves Buddhist or Christian—nothing. You’ve got to be the believer of Mao and communism.”

After Mao’s death, the new communist leadership allowed the Chinese people to keep some of what they harvested for themselves, in a sense allowing a bit of landownership, so people began to produce more food compared to the Cultural Revolution period, said Williams.

Because of this economic improvement, the Chinese Communist Party (CCP) took credit for lifting over 600 million Chinese out of poverty, but Williams completely disagrees and credits free market principles, individual hard work, and desire for prosperity for the improved economic conditions.

“I don’t buy into their propaganda at all. I think that human beings [have a] natural desire for freedom, for prosperity. They know how to do it, if you just leave people alone.”

Because of the complete state control over the information people got, from the media to schools, people in China really believed the “black class” should be destroyed, or at least subjugated.

She said another tactic Marxists use is to exploit peoples’ jealousy of the rich. Mao promised land to peasants but he never gave them land. They only worked on state-owned land to make the Communist Party rich, said Williams.

Mao’s death made her question the truth because the indoctrination made him out to be god-like, Williams said.

“The reason I wanted to study law is that I thought, ‘OK, I want to search for the truth now.’ Mao was a human being, that’s why he died, I realized that.” Instead of men ruling China, Williams thought maybe her country should be governed by the rule of law.

After beginning her law studies, she learned a harsh lesson about how the law was used by the CCP. “Quickly, I became lost again, because they told me the law is a tool for the party to use to govern the masses.”

During this time, Williams met an American exchange student studying in China who told her about America’s Declaration of Independence.

“My light bulbs came [on], the first time I heard of the concept of individual rights,” said Williams.

The American student also spoke about the “creator” giving these individual rights to people, which was appealing to Williams because she had only heard of the collective rights of different groups, like workers’ rights, given by the CCP.

Williams said she was moved and wanted to know more about freedom and America and decided to do whatever it took to go study in the United States.

Lying to CCP in Order to be Free

Williams said she had to come up with a strategy to get to America.

She was now on a mission to leave China but feigned love for the CCP. Her university supervisor had to grant her permission to quit her teaching job to study in an American graduate program in Texas, so only after she had proved her loyalty to the CCP, her request to go to the United States was approved.

She had to sign a paper promising she would come back to China after her education, which is the only way she got permission to apply for a study visa, she said.