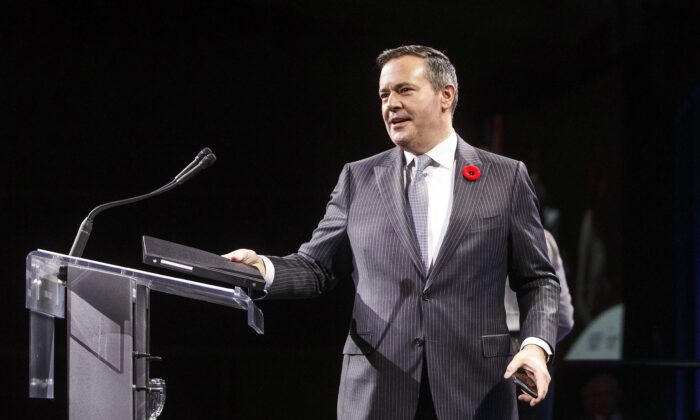 Alberta Premier Jason Kenney delivers his State of the Province address to the Edmonton Chamber of Commerce on Oct. 29, 2019. (The Canadian Press/Jason Franson)
Viewpoints

“Who has seen the wind?” asked Canadian W. O. Mitchell in his 1947 novel. In Alberta, the answer is just about everyone, as the winds of political discontent blow more fiercely than they have in decades.

After several difficult years, Albertans watched the Liberals get re-elected to another term despite being shut out in all 34 Alberta ridings. Premier Jason Kenney has decided to harness this dust storm in an attempt to improve the situation for the province. Unfortunately, his prospects for success are slim.

Just one day after the federal election, Kenney held a news conference to announce that Albertans would get a platform to voice their complaints with Ottawa. A panel of experts would oversee public hearings and deliver a report on how to improve Alberta’s place in Confederation. Unless Ottawa made progress on pipelines, Albertans would vote in October of 2021 on whether they support the principle of equalization in the constitution.

Equalization might as well be called the Quebec/Manitoba/Maritime Subsidization Fund. When the program began in 1957, the premise was to give help to provinces suffering economically so that all Canadians would have access to an equal level of public services. Political considerations hijacked this premise long ago. A 2013 study led by public policy analyst Mark Milke found that the so-called “have not” provinces had better public services in 13 of 16 categories. Equalization is overgenerous.

Currently, equalization comprises $20 billion of the $78 billion in federal transfers to the provinces. Of this, Quebec gets nearly $13 billion, while British Columbia, Alberta, Saskatchewan, Ontario, and Newfoundland get zero.

This situation is irksome to Albertans, especially given the ambivalence toward pipelines from Quebec premiers past and present. It’s why part of Kenney’s provincial election platform last spring included a referendum on the principle of equalization unless there was substantial progress on coastal pipelines and a repeal of Bill C-69, which he calls the “No More Pipelines Act.”

Some observers question the significance of such a move, given that a provincial referendum cannot dictate a national program. Even so, there is at least some validity to the idea. In its 1998 decision on the question of Quebec succession, the Supreme Court of Canada ruled that if a provincial referendum results in “a clear majority … on a clear question,” the federal government has “a constitutional duty to negotiate” the issue.

This means if Albertans voted overwhelmingly against equalization (and why wouldn’t they), Prime Minister Trudeau would at least have to talk about it. But given that the average minority government lasts 18 months, he likely won’t even be in power by then. As for constitutional changes, they require seven of ten provinces to agree. This has never happened yet, and given that five provinces consistently benefit from equalization, they would never agree to eliminate it.

Amendments are possible, though unlikely. Kenney has said previously that resource revenues should be removed from the calculations. But if they were, Quebec would gain even more and Alberta would lose just as much. Thanks to an amendment made by the Harper government in 2009 (which Kenney was a part of), the dollar amounts of equalization increase in amounts equal to national economic growth. Alberta will keep losing unless equalization is reduced.

But here’s the kicker. Even if equalization was eliminated entirely, and that $20 billion redistributed on a per capita basis to each province, Alberta would only be $2 billion richer for it. Alberta sends $27 billion more to Ottawa than it gets back, and such a change would only shrink that gap to $25 billion. Albertans are younger and earn higher incomes than most Canadians and that will always leave them paying more taxes and receiving less in pensions. And so long as most federal workers are in Ontario and Quebec, Albertans will still be sending their money there.

Kenney said, “People have a bloody right to be frustrated in this province,” and he is right.

No one can doubt the political savvy of trying to gain some advantage from this dust storm. But from a policy perspective, a dust-up with Ottawa over equalization could be “the way to dusty death … full of sound and fury, signifying nothing,” as Shakespeare wrote in Macbeth.