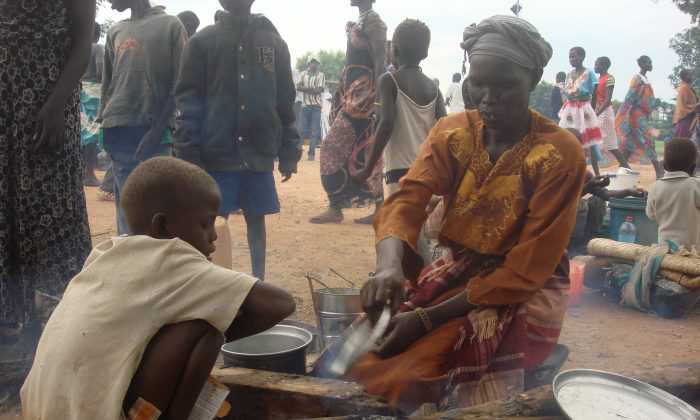 A woman prepares food as displaced women, men and children gather, in Juba, South Sudan at the UN compound in Tomping area on July 12, 2016. ( Beatrice Mategwa/UNMISS via AP)
Opinion

Giving women the same tools and resources as men, such as financial support, education and access to markets, could reduce the number of hungry people worldwide by up to 150 million. The Food and Agriculture Organization (FAO) and other humanitarian agencies estimate that 925 million people across the world are undernourished. Of this number, 906 million live in developing countries. Particularly in these countries, the greatest burden of economic crises falls on those less able to sustain it, women and children.

Women make up 43 percent on average of the agricultural labor force in developing countries, and they tend to be kept in low-paying jobs and have, for the most part, seasonal or part-time work. Plots managed by women tend to be smaller, on average, than those managed by men, and they have less access to tools and technology compared to male farmers.

Women have the traditional role of both producers and carers for children, old people, the sick, the handicapped and all those who cannot care for themselves. In Africa, women work an average of 50 percent longer each day than men. I remember visiting the countryside in Equatorial Guinea where I saw what is called casa de la palabra (house of the word), where men gather in the afternoon after work and spend several hours chatting or trying to solve problems in the village or community while their wives continue to work at home or in the fields. A similar situation exists in other African countries.

There is still little recognition of the critical role that women can play in increasing agricultural and business productivity. Although some commercial banks are lending more to women entrepreneurs to develop new agricultural services and products, some interventions such as land tenure rights and access to markets continue to keep women out of the picture. In Cameroon, for example, women hold less than 10 percent of land certificates, even though they do a significant part of the agricultural work.

According to the International Center for Research on Women (ICRW), improving women farmers’ access to adequate resources, technologies, markets, and property rights can help them increase agricultural productivity and improve household nutrition.

This is relevant since many people still go hungry every day, and this has an impact on their nutritional status. According to the Global Food and Farming Futures, the existing food system is failing half of the people in the world today. It estimates that one billion people lack crucial vitamins and minerals in their diet.

In China, several micronutrient deficiencies, such as iron, iodine, vitamin A, and folate are still frequent in the Chinese population, particularly in rural areas. It has been estimated that five percent of Chinese children are anemic, and also five percent of children have goiter, a consequence of iodine deficiency.

To help eliminate hunger, women should have easier access to better seeds, fertilizers, and time-saving technologies, as well as better credit, and more land and job opportunities. In Kenya, it has been shown that women with the same levels of education, information, experience and farm resources as men increased their farming yields by 22 percent.

Improved women’s education is part of the process for achieving women’s equality. It has been repeatedly proven that educating girls boosts countries’ prosperity and overall women’s well being. In addition, better educated women are more productive, and raise healthier and better educated children. Women probably are the world’s most underutilized resource. Giving them equal rights as men will significantly help in ending world hunger.

Cesar Chelala, MD, PhD, is the author of “Maternal Health,” a publication of the Pan American Health Organization. He is also a winner of an Overseas Press Club of America Award.