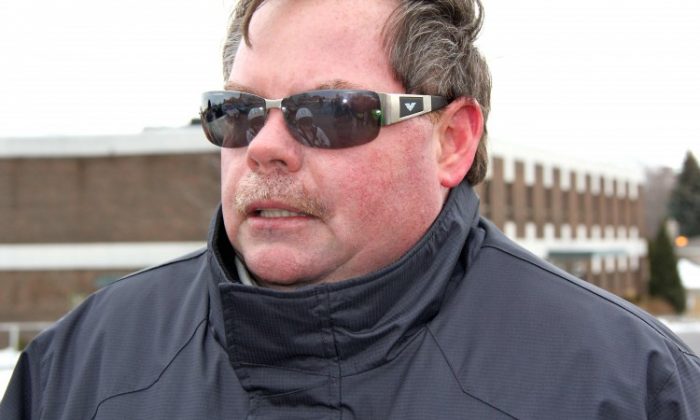 On a cold and extremely windy March 3, things heated up in front of Cornwall Community Hospital as about 100 people rallied to ask for an assessment of what they perceive as the hospital’s unfair hiring practices.

The rally participants complained that since the hospital voluntarily adopted the French Language Services Act, employees are not hired based on their skill levels.

Anglophones who already work at the hospital can’t move up in their jobs if they don’t pass a difficult French language skill assessment test, they allege. And while those hired can speak French, they may not be as qualified as a unilingual English speaker who cannot.

Registered nurse Christopher Cameron was one of the few current employees taking part in the rally.

“You’ve got to stand up for what’s wrong, that’s really where I stand. I want equality for all and that’s not how people are treated here. I want Ontarians to see this and say this is wrong,” said Cameron, a main organizer of the event.

He explained that although he is a qualified nurse with a specialty in hemodialysis, he has not been able to get a full-time job with benefits at the hospital because the French language proficiency test is so difficult.

“Since 2004 I have been applying for a lot of positions, many full-time positions, and been passed over. The last time I had an interview process the manager told me basically that ‘you don’t have French, you can’t have the job,'” he said.

“I think [language testing] has become a very selective process. It minimizes the opportunities for people, and really—where is the equality for all people? It doesn’t exist.”

He believes quality of health care will suffer if the hospital hires people based on language skills and only secondarily considers worker experience and qualifications.

“I’ve been inundated with so many calls and emails that were really heart-breaking,” he said.

“I felt that it was time to make a stand and give everybody a voice and hopefully we can put the word out right to the province. I was at Queen’s park this week to say that we are very frustrated.”

Speaking to the crowd he said, “Our politicians have to stand up and speak up about what is right and what is wrong. They know this hospital is hiring people from outside the community. There are people coming from all over Quebec.”

The South Stormont township is withholding a $30,000 contribution that it committed to pay annually from 2006 to 2015 to help with redevelopment of the hospital.

This was in response to a letter to the editor from former CCH board of directors chair Dr. Dany Tobler who suggested that people withhold donations to the hospital to protest the hospital’s voluntary adoption of the French Language Services Act.

In a second letter, Dr. Tobler suggested that people should still donate to the hospital foundation to “maintain our level of patient care.”

Last month, CCH board of directors chair Helene Periard said that a unilingual speaker will be hired if a bilingual one can’t be found to fill a bilingual position. She added that in 2009, the hospital ended the requirement for part-time employees applying for full-time positions to be bilingual.

“I think you have to say everything in moderation,” she told the Ottawa Citizen.

“We aren’t asking for every person on staff to be bilingual—it’s front-line staff who interact with patients. So there are plenty of other opportunities for employment in the hospital that don’t require the second language.”

Periard said the hospital must meet its obligations under the French Language Services Act and that it’s important that francophones have access to health care in French, especially palliative care patients or those with mental health issues.

Several of those interviewed by The Epoch Times at the rally agreed that francophones deserve to be served in their native language.

However, they also believe that hiring practices at the hospital shouldn’t prevent unilingual English workers from being employed when the majority of those served by the hospital speak English.