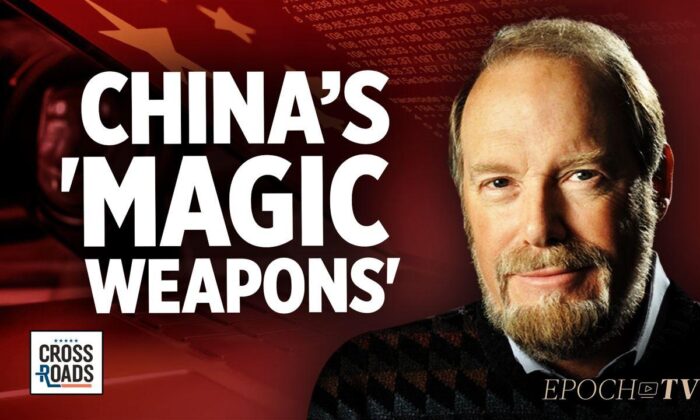 EpochTV Review: The United States Is Under Attack From China, but Not in the Way That We Think

The United States is under attack from China, but not in the way we might think. In the latest episode of Crossroads on EpochTV, host Joshua Phillip discusses how the United States is in an information war with the Chinese Communist Party (CCP) that is aimed at dismantling our free system of governance once and for all. He interviews Steven Mosher, president of the Population Research Institute and author of the book “Bully of Asia,” to learn more about this important threat to the free world.

Mosher says that China has largely thrown off the mask of biding its time and hiding its abilities, which has been its strategy for the past few decades. He believes that after the United States was weakened by the Obama administration, China thought it was finally the right time to take a more dominant position in the world. Mosher thinks China had gotten too far ahead of themselves at that time for a few reasons, one being a miscalculation on the economic influence China had in the world.

It turns out economic relations do not hold as much sway as China may have once thought. To many countries, sharing values of freedom means more than buying goods made unethically. This has factored into relations China had with nations such as Australia, with which Mosher believes China miscalculated the strength of their economic dependency. Australia was not willing to override their principles of free enterprise to Chinese Communist Party domination. Mosher also points out that the tendency to bully its own people as well as other countries does not always bode well for Chinese international relations.

Mosher discusses what China describes as the three “magic weapons,” a term coined by former communist Chinese leaders. The three magic weapons are: propaganda, united front tactics, and lastly, the People’s Liberation Army. The use of these weapons can be seen throughout CCP history, particularly in the Chinese Civil War. Each tactic is used as a stepping stone to seize total power and control the population. Military intervention is a last resort, and comes after the battle has already been won by the first two tactics. Although the eyes of the world have been turned toward the Chinese military build up, Mosher says that the CCP’s budget for propaganda and united front tactics has increased exponentially in recent years. The propaganda effort extends to radio stations and advertisement space in well known publications in the United States, whereas the United States does not have messaging and reporting being circulated around China, making it a very one-sided information war.

Mosher says there are also many academic groups that are heavily influenced by China that control what topics are allowed to be discussed in regards to China, its history, and its human rights abuses. “A free society which prizes the free flow of information is particularly vulnerable to these first two magic weapons. And at the end of the day, if you lose the battle for the hearts and minds of the people, and if you lose control of some of your major institutions in a free country like the United States, the third magic weapon is almost unnecessary, because you’ve already surrendered your minds and your institutions to the Chinese Communist Party,” Mosher says. “That’s the battle we’re in right now, and it’s a battle that we are not very well equipped to fight at this present moment.”

Mosher and Philipp discuss what the CCP regards as key targets in this war for world domination. The “seven perils” is a term used by the CCP referring to what it sees as threats to its continued rule. Interestingly, according to the CCP, the primary peril to its rule is an accurate discussion of the history and ideology of the Chinese Communist Party itself. “The Chinese Communist Party is in effect saying that an accurate discussion of its history will reveal the fraud that has been perpetrated on the Chinese people,” says Mosher, adding that an accurate discussion of communist ideology will also reveal the ideological fraud that the CCP is somehow advancing toward a utopian society where the Party will melt away and the people will govern themselves. Mosher calls its ideology a mirage that is meant to deceive and control the Chinese people.

The other five perils have to do with Western system of governance, namely in the United States. These include rule of law, which can’t exist in a totalitarian state because the Party needs to dictate what the rule of law is and be able to change it at any moment. They also include civil society, such as the church, religion, clubs, voluntary associations, orphanages run by private individuals, etc. Organizations like these operate outside the control of the government and threaten the CCP by establishing influence outside the Party, as well as suggesting that the CCP is not capable of solving all the problems of the Chinese people and society, which challenges the idea that the CCP can create a perfect society. Another peril is the free market, which is the buying and selling goods and services outside the control of the Communist Party.

Organizations like the NBA and many academics across the United States are examples of groups that adhere to the principles of the Chinese Communist Party and bear the mark of its influence. Mosher says he had hoped that the generations who had seen the destruction that communism had wreaked on traditional Chinese culture would stand up against it and lead to its collapse. However, the CCP was able to use propaganda in schools and stave off ruin. He said there is no end to the CCP’s desire for domination and does not believe there is a chance of reform. Many in the West, such as those who control Big Tech or run large investment firms on Wall Street, have become so heavily invested in China that they want to emulate the systems that are in place in China, such as censorship of social media. According to Mosher, when the United States opened China, the goal was that we influence China, not the other way around.

The founders of the United States went to great lengths to divide power within the federal government, because in the division of power lies freedom. “If you allow the system to come together into a single unified whole, there is no place for freedom to take root and to thrive,” says Mosher. Becoming aware of how the CCP is waging war on America is crucial to preserving freedom and protecting our nation from tyranny.

Share this article and watch the full episode on EpochTV to learn more.

“Crossroads” premiers every Tuesday, Thursday, and Sunday —exclusive on EpochTV.