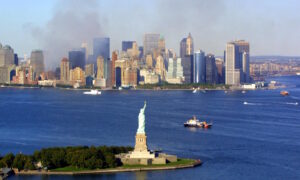 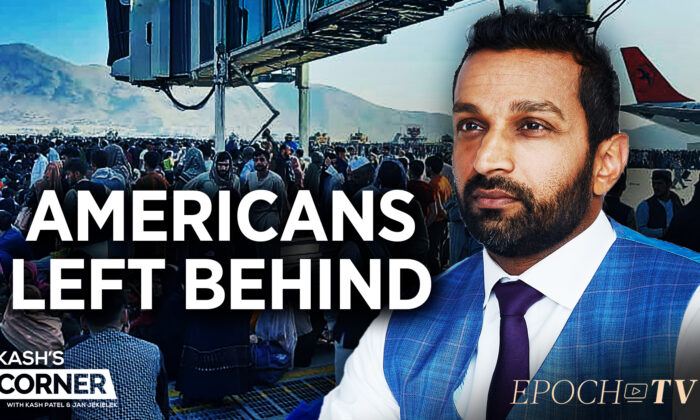 EpochTV Review: The Man With No Plan

One of the interesting things about watching commentary on the Afghanistan withdrawal is feeling a sense of validation. Like a majority of Americans, it seemed clear to me that there were things our government should be doing to get our citizens and allies out of Afghanistan that we very obviously weren’t—even if I had no idea what those things might be. It also seemed clear that the Biden administration didn’t actually have any kind of organized plan when it came to evacuating civilians once we brought our military home, as if the entirety of the administration’s strategy was a bulleted list that contained only one item: get the troops out.

In the second episode of the second season of “Kash’s Corner,” which was filmed before the final withdrawal deadline, Kash Patel also appears to feel that the Biden administration didn’t have any idea what they were doing. “With Many Left Behind in Afghanistan, What Should the US Do Now?” really is worth viewing even though we already know how the debacle played out. Watching this episode in the aftermath of what is now an ongoing disaster, it’s clear that Patel’s instincts were right, and his analysis feels like vindication for every ordinary American who followed as these events unfolded in real time and thought, ‘I could have done that better.’

This second episode opens with Patel and Jan Jekielek paying tribute to the 13 servicemen and women killed in the Kabul suicide bombing. It’s funny in a sad way to listen to Patel talk about the dignified transfer that was yet to take place and describe how solemn an event it is, as well as how difficult it is to meet with family members of the fallen, knowing that Biden spoke more to the families about his own deceased son than the soldiers, sailors, and marines he was there to honor. Outside of the fact that the suicide bombing probably wouldn’t have happened had Trump been reelected, it’s not hard to imagine that if Patel were still part of a second Trump administration, no one would have stood on the tarmac checking their watch as our dead were carried out in flag draped coffins.

Jekielek pulls them back to what was happening on the ground in the final days of August, asking what the plan is now, which is the first time—but not the last—that Patel says there doesn’t seem to be one. By the time this episode was filmed, he’d ceased referring to the effort as a withdrawal, rather calling it not only an evacuation but a flat out surrender of a 20-year war. It’s a far more accurate way to describe the situation, and it skewers the administration’s assertion that our rush to leave Afghanistan ahead of the deadline was the greatest, most successful airlift in history. Patel feared that we would end up leaving thousands of Americans behind, stranding them in a war zone (Jen Psaki will not be pleased with his choice of words), and while he’s wrong about the numbers, we know he wasn’t wrong about us cutting and running before getting everyone out. He also feared anyone we left behind would end up in a hostage situation, a concern that was more than prescient in light of the pictures we’ve now seen of the six airplanes sitting at Mazar-i-Sharif that the Taliban wouldn’t allow to take off.

With the subject of the Taliban officially on the table, Patel and Jekielek discuss what the Taliban is hoping to get in exchange for letting Americans out. Again, Patel proves his crystal ball is in excellent working order as he posits that the Taliban is looking to be recognized as the legitimate government of Afghanistan, and as such is probably after the aid the United States gave to prop up Ashraf Ghani’s government. Patel declares, as any sane person would, that this would be a bad idea, but of course several days after the taping, Secretary of State Antony Blinken declared the Taliban would have to allow Afghans to leave who want to do so if they’d like to see any relief from sanctions or any other aid. The episode really is fascinating in hindsight to listen to Patel’s logical, strategic commentary and realize the Biden administration didn’t do anything close to what he suggests.

Patel then gives a deeper breakdown into the differences between the Bagram Airfield military base and the airport in Kabul than the mainstream media has ever bothered with. Little has been made of exactly how well outfitted Bagram Airfield was, but Patel is happy to outline just how many advantages we would have had in keeping this base over using the Kabul international airport. He also explains for those unfamiliar with the Afghanistan landscape that the Kabul airport is in a valley. Combatants have tried to gain the high ground as long as war has existed, so it makes no sense to abandon Bagram—the high ground—in favor of Kabul—the low ground. Or at least, it makes no sense that Patel can find, unless Biden’s military advisors have the collective IQ of a warm bowl of soup or someone wants to be able to restart our longest war in a year or two. Patel doesn’t indicate a belief that going back in was the ultimate goal, but he does say that going back is one of the only ways he can see us being able to get out anyone we left behind, along with the billions of dollars in weapons. This is really where the viewer might start to wonder if there’s something to the theory that allowing Afghanistan to collapse was the goal all along.

With Many Left Behind in Afghanistan, What Should the US Do Now? | Kash’s Corner [Full Episode]

Jekielek swings the conversation around to the various factions we’ve now left to run roughshod over the country, including the Taliban, the Haqqani network, and the “Lion of Panjshir.” Patel dives far more deeply into the politics and history of Afghanistan than the mainstream media ever could, because if they understood the different factions they wouldn’t be able to scream that Trump negotiated with the Taliban and therefore he’s the real bad guy in all of this. To say the politics of Afghanistan is messy would be a massive understatement, and Patel explains how the factions all vie to govern various parts of the country, and that there’s no way to talk about setting up some sort of working government for the whole of Afghanistan without having the Taliban at the table.

Patel and Jekielek transition to the different terrorist organizations currently in Afghanistan, which includes ISIS-K and Al Qaeda in addition to the Taliban. There are some in our government on both sides of the political aisle who have suggested that because Al Qaeda and ISIS-K hate each other they’ll be too busy fighting amongst themselves to worry about the United States. Given how successful ISIS-K was at the bombing of Abbey Gate, that assertion comes off as incredibly naive, especially when we have a southern border that is wide open and the majority of civilians we evacuated were Afghans, not Americans.

Patel is right on the money again when Jekielek asks about the Taliban “helping” to evacuate Americans, SIV holders, and people with green cards from Afghanistan, saying he doesn’t believe they’re helping at all. More than a week out from the withdrawal, it’s obvious how right he is. He disagrees vehemently with the current administration’s strategy of sitting back and waiting for people to make their way to the airport in Kabul rather than going out and finding them, which they should have been planning for months. Afghanistan’s roads are terrible, there is no mass transit, and Biden’s team had three quarters of a year to figure out how to get to Americans outside of Kabul or Bagram to bring them back long before the exit deadline. The mad scramble at the end of the withdrawal was not something to cheer about, but an example of utterly failed leadership that shouldn’t have happened.

What also shouldn’t have happened was relying on private citizens to provide flights out of Afghanistan when that is the purview of the military. Patel is glad that private organizations are stepping up, however, since somebody has to, and he is in fact involved with several organizations that are probably still trying to extract Americans and our allies today. It does bring Jekielek to a worrisome point, however, when it comes to vetting who actually made it onto the airplanes that are now at our military bases and will soon be shipped off to God knows where throughout the country. Patel details the vetting procedures that should have taken place in Afghanistan before all these unknown civilians landed on our shores, and expresses his doubts that these procedures were done overseas. Given how haphazard the entire withdrawal was and how on-the-nose he is throughout the entire episode, I tend to think his instincts are right on this point. Patel is adamant that this vetting can still be carried out on our military bases but says it would require extensive planning and again, nothing about this withdrawal looks like it was planned.

The half hour closes with Jekielek and Patel going through the dangers of leaving behind so much equipment and weapons with no plan to either destroy it or get it back. It’s no secret we have the most advanced military on the planet, and now the Taliban has access to a myriad of our proprietary vehicles and arms. As Patel explains, even if the Taliban doesn’t have anyone who can fly a Blackhawk helicopter, they can still take it apart to see how it works, which will allow them to find a way to make it not work, and they can use components from anything they can take apart to build something new to harm us or any of our allies around the world. Patel’s basic argument is that you don’t necessarily have to know how a bazooka works to figure out how to blow up the shells as part of a truck bomb, and he’s absolutely right.

This episode may seem a bit like armchair quarterbacking on the surface, especially because some weeks have passed since we officially left Afghanistan, but it genuinely isn’t. Rather, it highlights the extent of Patel’s knowledge on this subject and how accurate his intuition was with the current administration’s handling of the withdrawal. Despite his predictions arriving after the fact, it’s still captivating to listen to him explain why everything about Afghanistan was likely to go horribly wrong if the Biden administration didn’t change course. Now that everything has gone horribly wrong, this episode needs to be watched and shared all over the internet not only to remind people that this was in no way a rousing success, but to keep the administration’s feet to the fire.