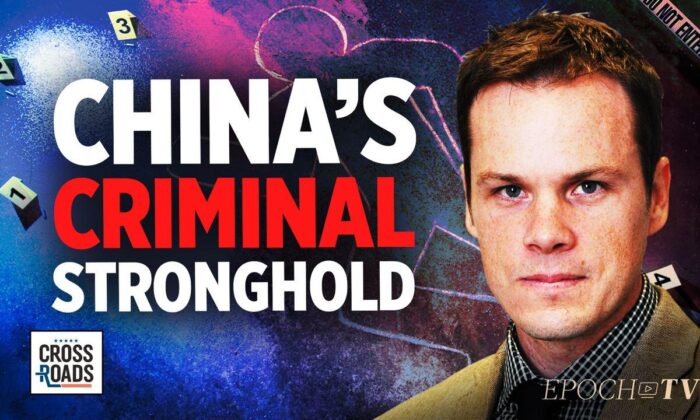 It sounds like the plot of a Robert De Niro movie. A powerful criminal organization uses casinos to launder drug money into “clean” cash that can then be used to purchase international real estate by corrupt politicians. It’s the kind of scheme one would expect to find in Las Vegas back in the 1960s, and it’s exactly what investigative reporter Sam Cooper discusses in the Jan. 12 episode of “Crossroads.” Only it didn’t happen in Las Vegas. It happened in Vancouver.

“Chinese Spies Have Built a Criminal Stronghold in the West, Tied to Cartels and Corruption” would arguably be a terrible title for a film, but it’s exactly what Cooper uncovered while looking into real estate transactions in Vancouver, British Columbia, something he started over a decade ago. As he explains to host Joshua Philipp, his investigation began innocently enough, in as much as anything having to do with shady Chinese real estate tycoons can be innocent, eventually leading him down a rabbit hole that involved Mexican drug cartels, dirty casino operations, and the Chinese Communist Party (CCP). It’s the kind of thing the legacy media would write off as a xenophobic conspiracy theory despite the ample evidence authorities have that this kind of money laundering is occurring (a scandal erupted about it in 2015), which is one of the reasons Cooper titled his 2021 book “Wilful Blindness.” Philipp has looked into the U.S. side of this kind of covert CCP-affiliated operation, so the two have a lot to talk about.

Philipp starts the interview asking how Cooper went from looking into real estate to uncovering an underground international banking ring with ties to the fentanyl trade, the Chinese mafia, and the United Front—the CCP’s spy organization responsible for peddling its influence abroad. Cooper starts out with a thousand-foot overview of his investigation, beginning in 2010 when he wanted to find out how so many wealthy Chinese citizens with murky backgrounds were managing to buy up large amounts of property on Canada’s West Coast. What Cooper found was a network connecting multiple mafias, corrupt politicians in both the East and the West, duffel bags full of cash, and casino movers and shakers who would be right at home in a Martin Scorsese screenplay. It’s no wonder that Philipp jokingly asks how Cooper is still around when he’s been writing a book about so many truly dangerous organizations, and that’s all within the first five minutes of the episode.

From there the discussion dives deep into the way money laundering and state-sponsored crime works. There’s a sort of Pollyanna view of life held by many ordinary citizens that makes them the perfect rubes for the kind of large-scale, politically protected criminal activity Cooper outlines, as they simply don’t believe government agencies would ever provide cover for gangs and cartels. Cooper has all of the receipts, however, detailing exactly how Canadian gangsters “lend” massive amounts of drug money to family members of Chinese Communist Party officials and other elites, who then use that money to gamble in Canadian casinos, thereby laundering the money before it is repaid to the gangsters through Chinese banks. While Chinese citizens have strict controls on how much money they can move out of the country, this system allows those higher up the food chain and often involved in nefarious activities themselves to move hundreds of thousands of dollars overseas to not only buy property but send their children to private Western schools.

Cooper explains that the process all begins in Macau, where the Canadian loan sharks meet the Chinese officials eager to buy a condo in Vancouver but unable to move enough money out of China for a downpayment on a piece of property. The loan shark invites the official to Canada, where they happily provide bundles of cash from drug transactions—literally the stereotypical $20 bills wrapped in rubber bands passed off in a parking lot—to gamble away at government-owned casinos. The official keeps any proceeds from their night on the town with half a million dollars burning a hole in their pocket, then pays the loan shark back electronically through China’s banks where the transaction won’t be traced. The money then goes back into producing drugs that will be sent to North America, making their way through the United States’ porous southern border, and from there it becomes a matter of lather, rinse, and repeat.

Chinese Spies Have Built a Criminal Stronghold in the West, Tied to Cartels and Corruption: Sam Cooper | Crossroads [Full Episode]

The idea that Canada, of all places, would be the center of this international money-laundering scheme probably seems ridiculous to most Americans, and indeed, Philipp presses Cooper on why Canada is the go-to location for these Chinese officials looking to scoop up North American real estate. Having already laid out the limits to average Chinese citizens for transferring money overseas ($50,000 is the cutoff), Cooper describes the kind of officials typically involved in these transactions, and those officials are anything but average. These are people with millions in their bank accounts who have grown wealthy through bribery and other forms of corruption, but with the $50,000 transfer limit, all that money essentially sits in Chinese banks collecting dust. In addition to bordering the United States, where illicit drug trafficking has long been a serious problem, Canada has the loan sharks with the drug money that needs to be laundered, the government-run casinos that can be used to launder the money, and enough local politicians and regulators willing to look the other way for the whole operation to fly under the radar. It’s the perfect location for setting up an ongoing money laundering racket, especially when the repayment of the loans happens offshore and will almost certainly never be investigated by the Chinese banking industry.

As Philipp astutely points out, this sort of money laundering shouldn’t be possible, as there are regulators in place to raise red flags whenever anyone walks in with hundreds of thousands of dollars in bundles of $20 bills. Cooper readily agrees that there are, indeed, regulators in place, and they even do their jobs by flagging these transactions, but after that everyone who should investigate the money just kind of shrugs. Whether it’s the police who never follow up or government officials who want to keep the tax money from the casinos flowing, there’s just not a lot of interest in shutting down the pipeline. Never mind that the money was used to buy fentanyl, heroin, or cocaine—it’s a huge revenue source for Vancouver and no one wants to be the one to stop the money from flowing into the coffers.

The problem is not just about the drug money, though. Philipp gives the viewer a mini lesson on the United Front, a legitimate spy organization with the CCP, which is mixed up with the Canada-to-China circle as well. This had a serious effect at the beginning of the COVID-19 pandemic, where the Canadian gangs were responsible for collecting personal protective equipment (PPE) to be sent back to China, for which the United Front took credit. Cooper describes the same kind of hoarding of medical equipment that the CCP used with Australia in the early days of 2020, when China was hiding from the world just how bad the Wuhan coronavirus actually was. Philipp lists other countries where this happened as well, from Europe all the way to Brazil, and how this PPE scandal revealed just how deep the United Front’s roots run internationally. Cooper found the same ties in Vancouver, though he hesitates on whether the Canadian government willingly or unknowingly helped the United Front by handing over PPE.

Philipp shifts the discussion to the United Front and overall political corruption in the Canadian government, and it’s well worth the time, given how far-reaching the organization’s influence is. Cooper has plenty to say on that as well, citing specific examples of recent political activity going on in Canada that his research revealed was tied to the United Front. This is the kind of discussion that typically gets dismissed out of hand as racist, as Philipp points out, which makes it even more important not to let the topics of this episode be swept under the rug. Cooper’s research has shown that all kinds of deals, from real estate to luxury goods, are being used not only in Canada but throughout the United States as well to launder drug money and move large sums of cash without funds ever actually crossing international borders. Cooper is still researching just how high the crime and corruption goes, but so far the evidence he has suggests it is a wide-reaching problem in the Canadian government.

With the Beijing Olympics right around the corner and the CCP trying to present a civilized mask to the world, it’s important to watch and share this episode to remember the kind of people in control of the Chinese regime and the kind of criminal activity in which Chinese officials are involved. These aren’t the average Chinese citizen who is at the mercy of the communist regime and just trying to survive in a country that actively suppresses speech and imposes social credit scores on the populace. It isn’t racist to point out that the CCP isn’t the good guy, and the world can’t trust them when they’re about to be at the center of attention in less than a week. In fact, it’s foolish given China’s rise on the international stage to stay silent on these issues.