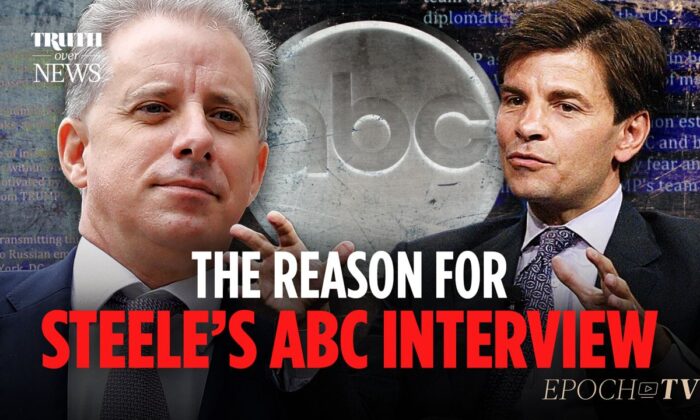 It doesn’t seem like it should be possible at this point for there to be anyone left who still thinks the Steele Dossier holds a shred of truth in its 35 pages, but apparently there are enough people that ABC News decided it was a good idea to have George Stephanopoulos interview Michael Steele to set the record straight—or something. In fact, ABC thought people would be so interested in hearing from Steele that they devoted over an hour to him, during which time Steele answered softball questions amounting to why he’s the hero we all needed in 2016 and is compared to James Bond while dramatic music plays in the background. While there are commentators in the piece who point out that the Steele dossier has never been verified and he was essentially hired to compile salacious rumors meant to derail Trump, it’s mostly a puff piece that makes the whole affair sound very cloak-and-dagger, and like the dossier is true just because Steele really believes what he put in there happened.

Luckily for all of us, Hans Mahncke and Jeff Carlson of “Truth Over News” do a 15 minute analysis of the Stephanopoulos interview in “The Reason for Steele’s ABC Interview.” After cutting through all the fluff, 15 minutes is more than long enough for the co-hosts to break down why Steele likely agreed to do the interview to begin with, and they mercifully don’t bother with the tension building music. They also don’t pull any punches or try to make Steele seem sympathetic by bringing up his dead wife. Instead they do something ABC stopped doing long ago: actual analysis of a subject.

Carlson is first up to bat with a nice synopsis of the many ways in which Steele and his dossier fail to live up to the hype of the ABC interview, along with some reasons why Steele undoubtedly feels now is the time to try to salvage his reputation. Carlson makes Steele sound less like James Bond and more like Maxwell Smart, noting that he left his “desk job” at MI6 a dozen years ago, and that he wrote his dossier because he was paid to by Hillary Clinton’s campaign, not out of some altruistic desire to save America from electing a supposedly compromised Donald Trump. Steele’s dossier kicked the “Russia, Russia, Russia!” narrative into high gear, a narrative that still rears its ugly, insufferable head on occasion, so it’s gratifying to watch Carlson list the legal trouble Steele and other members of the Clinton campaign now find themselves in for spinning a tall tale about Trump that made it all the way to the FISA court.

Mahncke follows to punch holes in the hull of Steele’s “I’m the good guy” boat by calling out not only the lies Steele told in his dossier but Stephanopoulos himself—who many younger viewers may not realize worked for Bill Clinton when Clinton was in the White House groping interns. Mahncke perfectly describes the almost casual questions Stephanopoulos asked throughout the interview, none of which were meant to probe very deeply into the dossier or Steele’s motivations, and that when Steele did get a question that was a little tougher, he dodged the answer. It’s amusing to see Mahncke—who is typically a straight shooter and doesn’t let much emotion bleed into his commentary—huff sarcastically at Steele’s absurd assertion that he didn’t want to reveal his sources to protect their identities when everyone already knows who Steele’s sources are, and all have stepped forward to wash their hands of him.

Mahncke then mentions the role John Durham’s investigation likely plays in the timing of Steele’s interview. For many months during Trump’s term, the political right looked to Durham as their last hope to round up all the dirty players involved in the Russian asset nothingburger, eventually deciding that yet again, no one would be held accountable as Durham’s investigation dragged on and on. That all changed in September when Michael Sussman, a Clinton campaign attorney, was charged with lying to the FBI about supposed ties the Trump Organization had with Russia. As Mahncke points out, Sussman is also tied to a lawsuit recently filed by Alfa Bank, the largest private bank in Russia, against Fusion GPS and a John Doe who fabricated the documents used to allegedly defame Alfa Bank. Since Sussman and GPS directed Steele to write reports on Alfa Bank, and since Steele has been directed to testify in a separate Alfa Bank case filed against Fusion GPS and its owner, Glen Simpson, it certainly seems like Steele is running out of time to salvage any credibility he had before deciding to play politics with the Clintons.

Carlson untangles the connections between Steele, Fusion GPS, and Perkins Coie, the Clinton campaign’s law firm in 2016 where Sussman had previously served as a partner. Steele was able to give Perkins Coie an in with the media as well as the FBI, where he’d served as a confidential source. Steele’s FBI handler, Michael Gaeta, gained permission from the outgoing Obama administration to meet with Steele in London and get what was essentially a first draft of Steele’s dossier, which Gaeta then passed on to Victoria Nuland in the State Department. Carlson recounts that Nuland shuttled the dossier to both the FBI and John Kerry, who was the head of the State Department at the time, while Steele was meeting with journalists to promote his salacious dossier as a factual retelling of the many ways in which Donald Trump was compromised by Russia. Eventually Steele met with David Corn of Mother Jones—hardly an unbiased news organization—and Michael Isikoff of Yahoo! News.

Isikoff’s article would later be used by the FBI as “proof” that Steele’s dossier had been validated when they sought warrants from the FISA court to spy on Carter Page. Essentially, the FBI claimed the information in Steele’s dossier was verified because Steele told Isikoff it was. Corn’s article was similarly used as “proof” that the Trump Organization had ties to Alfa Bank as Michael Sussman was claiming. Carlson lays out in detail the Inspector General’s findings on the veracity of Steele’s dossier (spoiler alert, nothing in it was verified that isn’t publicly available online), which makes it laughable that Steele stood so staunchly by his dossier in his interview with Stephanopoulos. Basically, Steele is still playing the tired refrain that the contents of his dossier are true because he says they are.

Mahncke focuses on the Inspector General’s report next, a little more sarcasm bleeding into his tone at points for which I really can’t blame him. The IG report found that Steele wasn’t the first-hand source for any of the information in his dossier. Instead he used the “I heard it from this guy” method of gathering intel, only the guy he heard it from, Igor Danchenko, told the FBI there wasn’t some grand conspiracy on the part of the Trump campaign and Vladimir Putin, and that some of his own subsources didn’t say what the dossier claimed they did. Those subsources signed affidavits saying they never told Danchenko those things that ended up in the dossier. Steele was well aware these subsources had no access to the kind of information he said they’d given him, but he still put it in the dossier anyway, which Stephanopoulos didn’t find pertinent to mention. It’s no wonder Mahncke sounds just slightly frustrated when recounting the content of the ABC interview, when even a United Kingdom court has flatly stated that Steele’s reporting was “inaccurate or misleading as a matter of fact.” There’s also the matter of Alfa Bank suing Steele for making up a story about them funneling money for Putin when he was St. Petersburg’s Deputy Mayor. Steele lost that case and had to pay damages to Alfa Bank. One begins to suspect that Steele wouldn’t know a true story about Russia if it jumped up and bit him.

We then arrive with Carlson at the pee tape story, the claim that the Trump campaign was colluding with Russia, and that Russia was responsible for giving Wikileaks Hillary Clinton’s emails—all of which were allegedly supplied by Sergei Millian, who was also supposedly the middle man between Trump and his Kremlin connections. Unsurprisingly, this was all fabricated by Danchenko, who had never met Millian and who didn’t even contact him until after Steele had already begun publishing his reports that listed Millian as a source. Carlson explains that Steele wrote reports on demand, depending on whatever angle the Clinton campaign wanted to pursue and none of which were true. By this point in the episode, it’s clear that you could fill an entire Jeopardy! category with the claims made in Steele’s dossier and title it “Things That Never Happened.”

Mahncke returns to close out the episode by detailing how everyone, even Trump-hating journalists, have now changed their tune on Steele’s dossier and are admitting they never should have taken it at face value. Isikoff has gone from saying, “Look at these explosive allegations!” to “Yeah…I probably should have checked into that a little more before publishing it.” Even the Washington Post is distancing itself from Steele and his claims about Michael Cohen, vice president of the Trump campaign, having met with Russian oligarchs in Prague. They were unable to verify Cohen was ever in Prague to begin with, and Robert Mueller barely mentioned Steele in his final report on the nonexistent Russia-Trump collusion. With one final swipe at ABC and the mainstream media in general, Mahncke warns viewers that the timing of the Steele interview might be to encourage other people who were involved in the Russia hoax not to change their stories, even after Sussman’s indictment. That’s why it matters that this episode be watched and shared, to further underscore that the stories outlined in the Steele dossier are exactly that: stories fabricated for a rabid anti-Trump segment of the population, with no more factual basis than “Little Red Riding Hood.”

Spreading the truth about Steele’s fictions may be the only way we are spared future interviews from the former MI6 paper pusher who has apparently never met a lie about Donald Trump that he didn’t like.