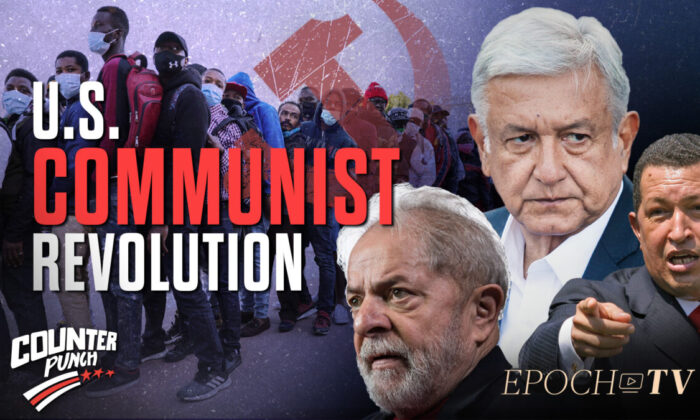 EpochTV Review: Just Because You’re Paranoid, It Doesn’t Mean They’re Not After You

I’ve had the pleasure now of reviewing several episodes of “Counterpunch,” and while I sometimes feel like I’m falling through the looking glass into a world where there’s a communist behind every bush, I am intensely grateful to have a host like Trevor Loudon breaking down the very real dangers of rising communist and socialist movements around the globe. That the Southern Poverty Law Center and Media Matters consider Loudon to be a right-wing conspiracy theorist really only serves to let you know that he’s probably onto something big. He may come across occasionally as a man who has a room in his home with a wall of faces and names connected by push pins and string, but that doesn’t mean he’s off the mark. If anything, it indicates the opposite.

It’s a good thing Loudon has such a naturally soothing speaking voice, because the topics he discusses in “The Communist Connections Behind What’s Happening at the U.S. Border” are deeply, deeply troubling. Unless you’ve been living under a rock or only vote for Democrats, you know what’s happening at America’s southern border. There’s no way to avoid the total chaos of migrants illegally flooding into the country for the last nine months, unless you want to avoid it and plan to live as if Twitter is real life. Even foreign countries know what’s going on down in (mostly) Texas and Arizona, with the few friends we have left probably wondering if we’re okay (we’re not), while our growing list of enemies salivate at the idea of just how easy it is these days to cross into the United States undetected.

Our growing list of enemies is the focus of Loudon’s concern, since it seems one is sitting right on our southern border. Mexico’s new president, Andrés Manuel López Obrador or AMLO, may have had a pleasant relationship with Donald Trump, but Loudon explains that he’s a fan of Simón Bolivar; would love to see a Bolivarian-style revolution to unite all the South American countries under one open-border umbrella; has communist roots, and an ultimate goal of dissolving the border between the United States and Mexico. One would be hard-pressed to illustrate how our southern border is not effectively, at this moment, dissolved, even though the Trump administration clearly showed that the constant tide of illegal immigration could be effectively fought and even stopped. That AMLO was willing to enforce Trump’s Remain in Mexico policy during the previous administration proves that he is capable of keeping migrants from crossing into the United States. He isn’t now because he simply doesn’t want to.

As Loudon further explains, AMLO has communist roots going back to the 1970s and is now the head of his own political party, MORENA. MORENA is not openly communist, but it is left wing, and with his Party’s support he is rumored to be planning to drive his country straight off a cliff. If he achieves this goal, the United States will have Venezuela 2.0 sitting on its southern border. Nothing about this will be accidental, as AMLO also has ties to the São Paulo Forum (SPF), which was founded in part by Fidel Castro and has been working to flip South American countries into socialist forms of government since the 1990s. The SPF ultimately wanted to rebuild the old communist block of Eastern European countries in South America, and members of the SPF currently head the governments in Argentina, Bolivia, the Dominican Republic, Venezuela, Nicaragua, Cuba, Saint Lucia, Panama, Peru, and now Mexico. In many of these countries, the parties that belong to the Forum openly state they are communist or socialist, and our neighbor to the south happily rubs elbows with them. It isn’t hard to see why this is a very big problem when the southern border looks like a giant slice of Swiss cheese.

It’s bleaker than that, though, as Loudon explains that the Democratic Socialists of America, which has six members in Congress, far more members at the state level, has a firm grip among unions, and has even wormed its way into churches, is signing on to the SPF. Despite their many claims that Democratic Socialism isn’t really socialism, it absolutely is giving AMLO an ally within our borders and our government for what he wants to do. Loudon reiterates that what he wants to do is turn Mexico into a fully socialist country before reminding the viewers of the tragedy of Venezuela. It took less than 20 years for socialism to cripple what was once the wealthiest country in South America, to the point where a roll of toilet paper is now unaffordable to ordinary Venezuelans. The current U.S. supply chain crisis is giving Americans a look at what Venezuela is like, though at least—at the moment—we can be reasonably sure at some point we’ll have chicken on the shelves again.

The Communist Connections Behind What’s Happening at the U.S. Border | Counterpunch [Full episode]

Venezuela is now under the control of the Cubans, the Chinese, and the Russians, with Islamic terrorists like Hezbollah mixed in for good measure. Meanwhile Venezuelans live in abject poverty. Loudon uses this history lesson to first, inform his listeners that 20 percent of Venezuela’s 30 million citizens now live as refugees somewhere else; and second, to point out that Mexico has 130 million citizens sitting right next door. If Mexico becomes the next Venezuela, where would 20 percent of their population be most likely to go? To the south, into countries that have already been destroyed by socialism, or to the north into the United States? It isn’t hard to deduce the answer to this question.

Many on the left would call these kinds of concerns, the idea that we might literally be flooded with Mexicans in a few years, thinly-veiled xenophobia. Only the problem isn’t with anyone’s skin color. The problem is with their politics, and if we’ve learned anything just from American politics, it’s that when leftists leave an area they’ve destroyed, they take their politics with them. People fleeing San Francisco don’t seem capable of understanding that their city has gone to rot because of the very policies they voted for, so they move to Austin, vote for the same policies, and ruin that city, too. The entire state of North Carolina is trending more towards purple every year thanks to residents from blue states like New York who decide they can’t live with any more tax increases, only to head south and vote for more taxes. Loudon explains that this happens with second and third generations of families that fled communist countries as well, that they either forget or never learned what it’s like to live under communist rule and vote for the policies that ruined the countries their parents or grandparents fled. This is why the idea of potentially taking in 20 percent of Mexico’s population is terrifying to anyone who values freedom.

Loudon doesn’t see the Biden administration as particularly caring about any of this, as the administration is either ignoring or oblivious to the fact that AMLO is working with the Nicaraguans and Chinese. No one can really argue that Biden actually does care when he put Kamala Harris in charge of the border and she’s only been down there once. Biden himself has apparently never been to the border in his entire career, and he certainly won’t go now. Loudon describes what is happening at the border as an invasion, which is again difficult to argue with when the Biden administration has done nothing to rein in the migration and is instead quietly shuttling illegal immigrants throughout the country. Loudon asserts that Biden’s team has no interest in protecting our border, and is instead working to collapse the country internally the way they have collapsed our reputation on the world stage through the Afghanistan debacle.

Loudon finishes the episode with a dive into Liberation Road, which is a reworking of La Raza from the 1970s that sought to have several southern states and portions of western states returned to Mexico. Liberation Road is now working to push AMLO’s agenda in Mexico to help speed along the collapse, having learned that it’s easier to use a country’s laws against them to overthrow it than it is to stage a violent revolution. They want massive amounts of immigrants to flood the United States who will ultimately never be removed, and there is yet again no way to argue that this isn’t happening. Loudon hammers home the dangers of this, that it is an existential crisis, that our administration and federal government know about it but are either too feckless to do anything or are in favor of letting communists and terrorists waltz right through our front door. As Loudon states in his opening, we are running out of time to combat this, so watch and share this episode as soon as you can.

“Counterpunch” premiers every Wed and Saturday—exclusive on EpochTV.