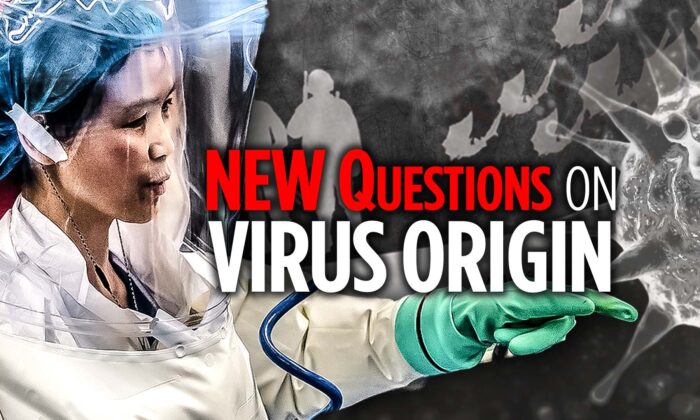 In recent days, the National Institute of Health admitted to funding what could arguably be called gain of function research on bat coronaviruses at the Wuhan Institute of Virology, in what many have termed a shocking turn of events. A top official at the NIH, Lawrence A. Tabak, wrote a letter to Republican Congressman James Comer of Kentucky to inform him that the NIH was in fact funding the study of bat coronaviruses in Wuhan. Tabak turned around to quickly throw an organization called EcoHealth Alliance under the bus by claiming that they were the ones who weren’t transparent with the NIH about what they were doing with their grant funding in Wuhan. It’s amusing that Tabak chose Comer as the recipient of this letter, when anyone following the back-and-forth on gain of function research knows that the Kentucky legislator who deserved this mea culpa is Senator Rand Paul.

This revelation won’t actually come as a shock to viewers of Hans Mahncke and Jeff Carlson’s “Truth Over News” series, since they already reported on EcoHealth Alliance in their Oct. 14 episode, “2018 Research Proposal Shows Remarkable Similarities to Pandemic Outbreak.” It is, however, shocking that the NIH would finally admit it, even if the left is already saying that the letter only alludes to the fact that they were funding gain of function research and carefully avoids taking any responsibility for COVID-19. It’s important to watch the latest twist uncovered by Carlson and Mahncke. Anyone still insisting the NIH’s hands are completely clean when it comes to COVID-19 or that Dr. Anthony Fauci never lied to Congress just doesn’t want to accept that the guy they’ve put all their faith in to tell them when to wear masks, whether to get vaccinated, how many booster shots they’ll need, and if they can gather with their family for Christmas, isn’t a saint.

Carlson opens the episode discussing a recently uncovered 2018 email proposal from Peter Daszak, who runs EcoHealth Alliance, in which he specifically discusses collaborating with the Wuhan Institute of Virology to create new coronaviruses by combining preexisting backbones, like Frankenstein building his creature out of cadaver parts. Building a virus this way would obscure any clear ancestry for the resulting virus, which just happens to be one of the main stumbling blocks when it comes to discovering the origins of COVID-19. There is nothing in the virus’ DNA to explain how it made the jump from animals to humans, despite the persistence of the pangolin theory. The proposal also discussed specifically inserting something called a furin cleavage site specific to humans into these Franken-coronaviruses, a defining feature in the spike protein of SARS-CoV-2. Daszak further proposes developing a nano vaccine to these coronaviruses, a kind of vaccine the Wuhan Institute of Virology was already working on.

Mahncke steps in to remind the viewer of the teleconference Fauci held in February of 2020 where he and his cohorts discussed the origins of the coronavirus sweeping the globe and whether it was likely man made or evolved naturally. Viewers may recall that several scientists on this call leaned heavily in the direction of the virus originating in a lab, though ultimately they pushed the natural origins theory relentlessly. What is interesting to note is that one of the teleconference’s participants almost immediately sent a message to the group suggesting they didn’t only need to talk about the furin cleavage site insertion, but also COVID-19’s backbone. Prior to the discovery of Daszak’s email, there was no real understanding of why any of the participants would be talking about the virus’ backbone, and while it isn’t exactly a smoking gun, it definitely seems plausible that the group on the teleconference thought the novel coronavirus they were dealing with might have been engineered from the backbone up.

The 2018 proposal, as outlined by Mahncke, specifically aimed at synthetically combining multiple virus backbones into something new and untraceable to its origin, then insert a furin cleavage site that would allow the virus to attach itself to human cells. This would make the virus more virulent in humans and is coincidentally the defining feature of SARS-CoV-2 that separates it from all other coronaviruses. This proposal was leaked to an online organization called D.R.A.S.T.I.C. Research, which has been independently tracking the origins of COVID-19, with a specific focus on the lab leak theory. Mahncke explains that this proposal has been authenticated by one of the members involved with it, Linfa Wang, who is the Director of the Emerging Infectious Diseases Program at Duke-NUS Medical School in Singapore. The revelation of this proposal not only adds another piece to the ongoing puzzle of how and where COVID-19 originated, but offers a possible explanation of why Fauci’s teleconference attendants were prompted to discuss the virus’ backbone in addition to the furin cleavage site.

Carlson picks up the ball on that furin cleavage site, which really should make anyone still clinging to the idea that COVID-19 came from a wet market do some self examination. COVID is bizarrely both extremely well adapted to infect humans right out of the gate, while ill-adapted to infect any other animal, including bats, where it supposedly originated. In fact, in an effort to determine just which animal COVID-19 came from, scientists tested how well it did at infecting numerous species. The results of the tests showed that humans were hands down the most susceptible to SARS-CoV-2 binding to their cells, and again, COVID-19 is the only coronavirus to contain a furin cleavage site that would facilitate this level of infectivity specific to humans. Scientists have been stumped by how COVID-19 developed this furin cleavage site since the pandemic began. While it could have sprung up naturally, to date nothing like it ever has. The idea that this was a naturally occurring evolution seems less likely after Carlson explains that furin cleavage sites have successfully been inserted into viruses under laboratory conditions.

The natural origins theory falls even farther apart as Carlson tells the viewer that furin cleavage sites can be inserted seamlessly into viruses, leaving behind no evidence this was done. Furthermore, Dr. Shi Zhengli, whose fingerprints have been all over the investigation into COVID-19, oversaw a thesis back in 2017 on this kind of insertion, where she was replacing the S-gene on bat coronaviruses. The mainstream media would insist it’s just a coincidence that she was one of Daszak’s partners in his proposal to the NIH, and failing that would insist that there’s no actual proof the technology Shi was using in 2017 allowed Daszak to insert a furin cleavage site into any coronaviruses. Carlson doesn’t assert that this definitely happened, but the evidence indicates it certainly could have.

Mahncke returns to point out that for two people who have nothing to hide, both Daszak and Shi have been remarkably tight-lipped on the furin cleavage site. Daszak has gone on the offensive to try to make the furin cleavage site sound like no big deal, while conveniently forgetting to mention his 2018 proposal that explicitly suggested inserting one of these sites into a synthesized coronavirus. For her part, Shi went to great lengths to describe the features of COVID-19 in an article published in “Nature” on Feb. 3, 2020, yet somehow managed to omit anything about the furin cleavage site. One could argue she just didn’t know about it yet, but Mahncke explains that this site is immediately visible in COVID’s genomic sequence, which had already been released before the article was published. Even proponents of the natural origins theory acknowledge the presence of the furin cleavage site, like Vincent Racaniello, a Higgins Professor at Columbia University in the Department of Microbiology and Immunology, who runs a podcast where he still plugs the natural origins theory. On his blog, “Virology,” Racaniello wrote only 10 days after Shi’s article was published that a furin cleavage site inserted onto the H5N1 flu virus made it more virulent, then speculated that inserting a furin cleavage site into a bat coronavirus would allow it to infect humans.

Carlson allows that COVID-19 does resemble other bat coronaviruses, while explaining that even though this is the case, the virus’ backbone doesn’t match any backbones previously recorded. Somehow“truthers” see the natural origins theory as evidence that the virus wasn’t engineered in a lab, like Kristian G. Andersen, one of the authors of the “The proximal origin of SARS-CoV-2,” whose research also just happens to be funded by Fauci. Using the argument that there is no previously recorded backbone that matches COVID-19 as proof that it evolved naturally hinges on the assumption that all scientists are posting the genetic sequences of the viruses they’re working with to public databases. This is a huge assumption to make when the Wuhan Institute of Virology took their database of viruses offline back in September 2019, only three months before the first officially documented case of COVID-19.

Mahncke then highlights another aspect of the 2018 proposal that should raise a few eyebrows: the creation of something called a consensus virus. This virus would be specifically engineered from multiple viruses so as to have no discernible family tree, and thus no way to trace it back to its roots. Consensus viruses don’t exist in nature, and instead average out their underlying genetic components into something entirely new, so no single ancestral virus can be parsed out. Daszak aimed to create three to five of these new consensus viruses per year, because what could possibly go wrong with such a plan? If Daszak was creating these consensus viruses, it might explain why no COVID-like coronaviruses exist in bats or anywhere else. Mahncke presents even more evidence to support the idea that COVID-19 may have started out as a consensus virus, as it matches multiple known viruses across its genetic sequence without clearly and definitively being related to any of them.

Mahncke also explains that Daszak wanted to develop an aerosol vaccine to preemptively inoculate bats against coronaviruses before any kind of outbreak could occur among bat populations. It seems a strange thing to tack onto the other research outlined in his proposal until Mahncke mentions that the Wuhan Institute of Virology was also developing these types of vaccines. Carlson expounds on this new kind of vaccine, a nano-technology influenza vaccine, which appeared in a Chinese media report in 2018 and subsequently vanished the minute the U.S. embassy in Beijing and the U.S. Consulate in Wuhan found out about it. The adage that anything posted on the internet is forever doesn’t apply in China, as the article was scrubbed and all links to it blocked. The timing of this new delivery method and how quickly it was hidden certainly seems suspect when Daszak came out with his proposal only a few weeks later, and the wording in the proposal suggested that the development of a new vaccine technology was already in the works. Again, it’s not a smoking gun, but the timing is awfully convenient.

Mahncke closes out the episode with a subtle jab at every organization that has pushed forward the natural origins theory of COVID-19 as the most plausible, despite everything he and Carlson have previously uncovered. While he never dismisses the natural origins theory, Mahncke lists the coincidences one would have to believe occurred for COVID-19 to have evolved without human interference. It’s a lot of coincidences, enough to make any critical thinker uncomfortable with the media narrative. Once you’ve shared this episode, it will surely spark some debate with anyone you know who is still tied to the story that in all likelihood the pandemic started in a wet market, and perhaps make them reconsider when to stop believing in coincidence.