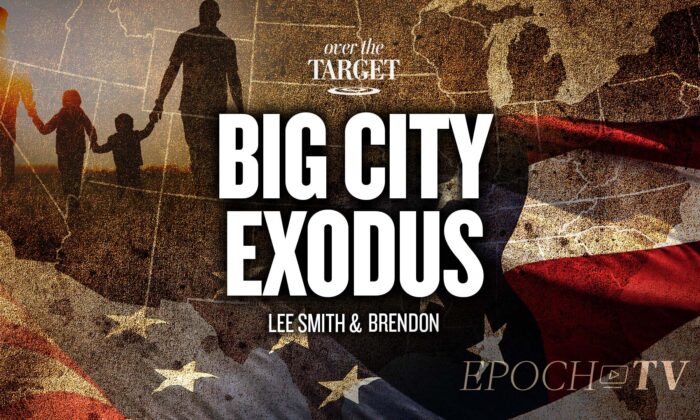 In this newly added series to EpochTV “Over the Target,” host Lee Smith talks about the mass exodus happening in major cities across the nation, from New York, to Chicago, to San Francisco, Boston, and more. This year alone, 350,000 have left New York State as well as California. Around 350,000 have moved to Texas. Florida has gained 250,000 residents.

“We’re seeing one of the most profound shifts of internal migration in the United States that we’ve seen in a very long time,” says Smith.

Now the question is, what are the consequences going to be for the states involved?

Smith says that one of the great things about living in the United States is geographical mobility and upward mobility. We move because we move up in life but we can also move anywhere. It is reflected in our country all the time that we can move to different cities that are more appropriate for our families and life circumstances, and we are more fortunate than other countries in our ability to do that.

In America, we can look back at mass movements throughout our nation’s history, such as the westward expansion during the 19th century, the great migration which included the post reconstruction migration of African Americans moving across the country, and the post WWII migration when people moved off the farms to the suburbs and cities. Now, we are seeing people moving away from cities into suburbs or even to the country.

Smith believes what is currently happening is a profound historical moment that’s going to have important consequences politically and socially.

Smith speaks of his personal experience moving from Washington, D.C. to South Carolina. Having spoken with friends and neighbors who also took part in this mass migration, many people were upset about the lockdowns and loss of liberties and social unrest coming out of their former cities. Political initiatives such as defunding the police also aided to their decisions.

He notes that it’s not all about politics, it’s about raising families, living out their values, living in safety, and enjoying important things in life such as community.

Smith says people don’t want to be divided by politics any more and they are looking for places that allow them to live the way they want. Many people are experiencing an enormous feeling of liberty and a great return to normalcy after the COVID-19 pandemic measures. They want to remember what life was like before COVID-19, and to be surrounded by a circle of like minded companions.

New York, California Lost 700,000 People in 2021—How Will Mass Exit Impact Major US Cities? | Over the Target [Full Episode]

However, is there something to be said for staying in these liberal-run areas in order to fight back and hold the line? Many people are doing this across the nation, as seen in protests in New York City and parents influencing or taking over their school boards.

Smith says he appreciates the people who are fighting for their neighborhoods and schools, however, everyone needs to make those decisions on their own. Factors such as age, family size, and age of children all play an important role in deciding what is best for each individual family. He notes that if someone is 80 years old and crime is rising in their area so that they don’t feel safe anymore, that might change their decision.

“There are lots of reasons to stay and fight for your city and I appreciate what those people are doing. On the other hand, though, when they are turning the wheels of a political machine against you, when they are deciding to defund the police and they are letting criminals go free, that is extremely dangerous, that’s not just about fighting for your neighborhood restaurants to stay open, as important as that is. They are opening the gates of hell on city residents,” Smith says.

The decision to stay or leave ultimately boils down to what kind of a family and values people have and how their circumstances affect those values and desired way of life. Smith also points out that the people who suffer most at the hands of crime and destructive liberal policies are minority communities. Unfortunately, that population has a harder time leaving due to finances.

What are the implications for states both losing and gaining residents? For the states losing people such as New York, it is a tragedy. New York City has been one of the world’s most exciting cities to live in or visit in the past century. However, once the city began closing restaurants and demanding vaccine passports, it turned into a place that people no longer want to go to and visit. Today, New York is a very strange and dark city with bizarre ideas on how America should look.

When a state loses a vast amount of people, it also loses political power, not just due to voters leaving, but also due to politicians moving. States that gain more citizens can also see power shifts. Smith says the center of political gravity in America appears to be moving out of the northeast and California, despite the size of these states, and moving southward. What will that look like for these southern states? Hopefully people fleeing blue cities don’t bring the same policies they are fleeing with them.

Southern states want newcomers to look at the politics that they voted for and were implemented in their old state and understand why it made things so bad. Smith says he is optimistic and believes that people are looking at those policies and have a clear understanding of what they don’t want any more. He also says that this mass migration is the perfect referendum on a political party; it’s not just voting against what that party stands for, people are voting with their feet. People are actually leaving and abandoning the party and platform that does not serve their values or best interests anymore.

Watch “Over the Target” exclusively on EpochTV.