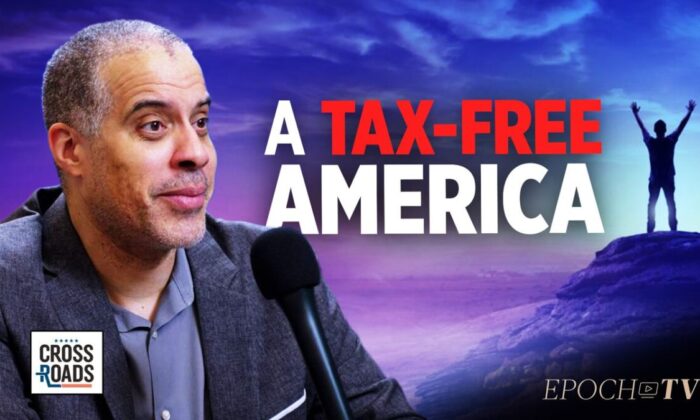 Recently, “Crossroads” host Joshua Philipp interviewed Larry Sharpe, the 2018 Libertarian candidate for governor in New York State. I admit to being biased, as I voted for Sharpe in 2018, thought he was far superior to both the Republican candidate and our recently dethroned King Cuomo, and I will happily vote for him if he decides to run again in 2022. Sharpe offers an accessible look into the Libertarian position on the government’s role in everyday life, and though the episode featuring him is titled “How America Could Be Made a Tax-Free Nation,” he discusses far more than taxes.

Sharpe’s policy positions are reasonable, logical, would help lift New York from the bottom 10 of the least free states in the union; and might even stem some of the bleeding as people flee the state. Unfortunately, as a lifelong New Yorker, I can say with some certainty that it is precisely because his policy positions are reasonable and logical that he is unlikely to ever gain any traction within the Empire State. This remains true even while we have a tyrant like the new governor, Sandy Hochul, eager to prove that she can oppress New Yorkers better than Andrew Cuomo did.

Still, I hope everyone who comes across this episode takes the time to watch and share it, because Sharpe’s view of government and his policy positions could be applied to any state nationwide. Libertarians are often accused of being cold-hearted incels, but more often than not they are the ultimate in small government, self determination types who just want to be left alone. Their ideas also come across as a bit pie-in-the-sky at times, though that certainly doesn’t apply to Sharpe in this interview.

For a state as diverse as New York, applying a one-size-fits-all approach has proven disastrous for anywhere in the state that isn’t a large city. Frankly, some of the cities aren’t doing well under the crushing weight of the mandates designed specifically for the five boroughs. There’s a reason upstate and Western New York have been trying to find a way to break away from downstate for decades. Even Long Island wants to be out of the grip New York City (NYC) politicians hold on Albany. The calls the United States is seeing nationwide for red states and blue states to have some kind of amicable divorce have been going on in New York State for a very, very long time.

Sharpe’s proposals might go a long way to quelling those calls for a permanent separation, as he’s one of the few downstate politicians to recognize that different areas have different problems, and therefore require different solutions. It is also why the policies he put forth could so easily translate nationwide, or at least spark conversations on ways to address local issues with locally tailored solutions. Philipp begins the interview with an eye toward finding alternatives to the tax and spend mantra that has sent many a city, and sometimes state, careening toward bankruptcy. Sharpe is happy to present alternative plans to reduce taxes and still cover the cost of things like infrastructure, while assuring the viewer that Libertarians do not want the poor to get poorer while the rich get richer. This is another very common criticism of the Libertarian Party (not to be confused with voters who lean libertarian), and Sharpe easily deflects this criticism by using real-world examples from NYC itself, the epitome of the idea that only big government can fix problems and help the poor.

Sharpe wastes no time launching into his first policy proposal to, as Philipp puts it, “build bridges and schools,” by suggesting that there are many roads and bridges leading into and out of NYC that could easily lease their naming rights to major companies, the way football and baseball stadiums do. He offers potential dollar amounts for what these naming rights could bring in for the express purpose of maintaining these same roads and bridges, while pointing out that $100 million may sound like a lot to the average citizen, but it’s nothing compared to the amount of money marketing departments spend at companies like Google or Pepsi. He also points out that roads and bridges are seen, mentioned, and used with much more frequency than ball fields, which are only used when there’s a game, and frequently appear in television shows not only on the major networks but through streaming services. It would be built-in product placement for the companies leasing the naming rights, while allowing the state to retain ownership of the infrastructure. This might not work so well for a much smaller city like Utica, but it would save the state the embarrassment of online petitions demanding that the recently rebuilt and renamed Governor Mario M. Cuomo Bridge be changed back to the Tappan Zee. Besides, under a more Libertarian form of government, Utica would have more freedom to come up with its own methods of paying for infrastructure.

Naysayers are often hesitant to allow private industry to fund something as important as roads and bridges, but Sharpe addresses those concerns without even being asked. As a businessman, he suggests tying maintenance of the roads and bridges to the naming rights, and if the safety of the infrastructure falls below a certain level, the company loses the contract. These contracts could be front-loaded to pay for the infrastructure ahead of time, with back-up companies kept on a waiting list should the first company default. Funding roads and bridges this way would also help the poor and middle class, as in Sharpe’s plan toll booths would go the way of the dinosaurs. Since it generally isn’t the wealthy who are driving in and out of Manhattan to work, the wealthy aren’t the ones those tolls hurt. They in fact become a punitive tax on the middle and lower classes for the privilege of working downtown.

Larry Sharpe: How America Could Be Made a Tax-Free Nation | Crossroads [Full Episode]

Sharpe also puts forward a rather brilliant idea for maintaining the MTA without raising fares, while reducing wear and tear on roads by finding alternate ways to bring goods into the city. The subways only run every other train at night, leaving plenty of time for businesses to bring in their own freight trains on the off-times. Sharpe again suggests selling naming rights to train stations in exchange for businesses building out the infrastructure required to handle these new freight trains, keeping the cost of a ticket stable or even lowering it while upgrading the lines and stations. Philipp reminds any viewer still hesitant about this idea that this is exactly how infrastructure used to be built, like the transcontinental railroad and the ferry system. Both were worth big bucks to private industry back in the day, and though Sharpe concedes that some businesses could default on their agreements, he also points out that city and state governments wouldn’t be beholden to just that company. If Amazon backs out of paying for the naming rights, Apple could always step in.

Philipp and Sharpe then tackle the next big objection usually thrown out when discussing how to reduce the size of government without losing services: policing. Contrary to the rallying cry of “Defund the Police,” Sharpe suggests neither decreasing nor increasing the amount of money going to police departments, instead restructuring them. He also doesn’t expect that this restructuring should be applied in areas that are happy with their current policing system, like smaller towns and more rural areas. For larger towns and cities looking for reform, he would implement what he calls FAQS. This system would allow police forces to break their departments into sections for Family Law, Active Policing, Quality of Life, and Social Work. In Sharpe’s system, each department would work with community liaisons, allowing them to strengthen the bonds between officers and the public, while giving flexibility to different regions to arrange the departments as they see fit.

It’s another excellent suggestion, one that makes so much sense it should be adopted immediately and probably never will be. Under Sharpe’s proposal, a city like Buffalo might require a much larger Quality of Life department to deal with things like noise complaints than a village like Naples (the one on the Finger Lakes, not the one in Italy). Buffalo would also likely require a more robust Active Policing Unit, while Naples may need a larger Social Work unit. Sharpe’s FAQS plan would allow individual municipalities to arrange their police departments in ways that fit their communities, while having statewide rules in place to prevent officers from burning out.

As a former Marine, Sharpe explains that soldiers are never kept on active duty longer than 15 months at a time, but police in cities are kept in violent neighborhoods indefinitely. He would not require officers to spend more than a predetermined number of years in an Active Policing Unit where they dealt with the worst crimes. Rather, he would cycle them out to one of the other departments for a year, giving them time to deal with trauma and decompress.

Here Philipp brings up the idea that Libertarians are basically anarchists, and though Sharpe says there are those elements in the Party, his goal is not to get rid of government entirely. Rather, he wants to break the monopoly that government has when it comes to taking care of every aspect of life. He mentions private charities, which used to handle many of the social needs of the poor and downtrodden, but who have slowly been squeezed out of the picture in nanny states like New York. Sharpe wants to spark an interest in communities taking care of themselves again rather than relying on the state or federal government to swoop in and make all their problems go away, suggesting tax incentives for donating a specified dollar amount to charity in lieu of taxes. It would allow those who want to pay tax money to New York State to continue doing so if they chose to, while giving others the opportunity to divert funding to other organizations to help with social welfare. He said he didn’t want to slay Goliath, just provide a lot of Davids as alternatives.

The episode closes on the idea of strengthening the community by reducing the size of government, for which Sharpe again makes a strong case. Once more bucking the Libertarian stereotype, he acknowledges that with government so interwoven into everyday life and providing so many basic necessities to people, it can’t simply be ripped away. Support structures have to be put in place first by communities so that citizens don’t feel beholden to the government for a paycheck or social services, or they’ll never vote for a smaller government. Sharpe sees the end goal as providing alternatives to government, because it will either make the government function more efficiently or back out of the market entirely.

Though the interview is confined to Sharpe’s vision for New York, his view on the inefficiencies of centralized government is easily applicable to the entire country given the current push by the federal government to overstep states’ rights. So, even if you aren’t a New York State resident (and lucky you if you’re not) you should take 15 minutes to watch this episode and share it with your friends and family.

“Crossroads” premiers every Tues, Thurs, and Sun —exclusive on EpochTV.