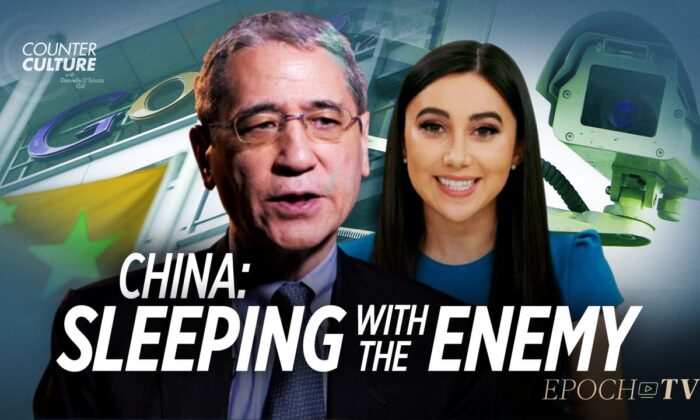 EpochTV Review: How American Citizens Can Defend Their Country Against the Growing Threat of China

In an episode of “Counterculture,” host Danielle D’Souza Gill talks about the growing threat of China and what Americans can do to combat the regime’s dangerous influence in the United States.

Only a few years ago, China was heralded as an economic success, with American corporations rushing to do business there, despite the regime being plagued with human rights violations. Apparently the massacres, forced abortions, and murder of religious minorities didn’t matter to the corporations. However, as time went on, China’s actions signified that their intentions towards international business partners were less than honorable, such as the occurrence of intellectual property exploitation. For decades, U.S. companies have invested in China only to get burned in return. Sadly, although they have paid a heavy price for not recognizing that China is not a free country, they haven’t learned their lesson and come back to America. Rather, many U.S. companies have marched in step with China propaganda like cancel culture, censorship, and political correctness.

Why would these companies implement the very ideologies and policies that have hurt them? Why did they choose to do business with China in the first place? The human rights abuses they witnessed under the regime, and chose to ignore, reveal the workings of the minds of many American business leaders. They don’t care about liberty or their fellow man, only about money and power, even at the cost of the inalienable rights of their neighbor. They aren’t horrified by what they see in China. They are jealous because they want the same degree of control for themselves. As the leading nation in the free world, we need to remember that humanity, rights, and liberty matter.

Gordon Chang, columnist, author, and lawyer joined Danielle to discuss China’s threat to America. Chang is the author of “The Coming Collapse of China” and “The Great U.S China Tech War.” Chang used to practice law in China and lived there in the 1990s. He says that initially, China felt very optimistic and very much like a free country. As he and his wife lived, worked, and traveled throughout the country, they began to see a very different picture and realized that China did not embody modern culture. Since then, various crises have hit the Chinese regime which Chang believes will create difficulty for the regime, the Chinese people, and the United States because they motivate the regime to lash out.

Chang says that he thinks both democrats and republicans alike in the American political class miscomprehended China. China is not a competitor or an adversary, it is an enemy; and we know that because they openly call the United States “the enemy” in their own newspapers. Xi Jinping is a revolutionary who has been talking about instituting worldwide Chinese control for years. Although the United States is a far stronger society than China, Chang warns that China can still destroy America if it doesn’t defend itself against the regime attacks.

In the episode, Chang talks in depth about the various ways China can and is attempting to take over the United States, by moving against countries like Taiwan; India, where it has been amassing its forces; and Japan and the Philippines where the United States has allowed China’s acts of aggression to go unchecked. Chang says that China is not just attacking the United States, but also other democracies and the notion of democracy as a whole. He emphasizes that America cannot allow China to take over any democracy, especially Taiwan, which has become the test of American credibility abroad. Chang argues that since Biden took office, America’s enemies have become emboldened. “When bad things happen someplace, they happen everywhere else or many other places at the same time because the bad guys see opportunity,” says Chang.

Although Trump wanted to initiate peace and good relations with China, there was still an element of defense and the priority of protecting America first. However, with the Biden administration, the United States is displaying weakness and actually inviting countries like China and Russia to go on the offensive and move against not just the United States but other nations around the world.

Chang believes that China is trying to overthrow the United States with force. The Chinese military has used intelligence and social media to advocate violence in the United States through groups like ANTIFA, and has played a pivotal role in encouraging aggression among Americans. On and below the surface, China has been trying to remove the United States government. Even if some Americans aren’t aware of China’s influence, they are still aiding the Chines Communist Party’s (CCP) agenda by falling prey to its propaganda and narratives and contributing to the behavior and division that follow. The Chinese regime has been promoting critical race theory (CRT) and circulating propaganda pieces and attack pieces in U.S. elections. “China is the greatest threat by far,” Chang states, saying other threats pale in comparison because China is behind the efforts of other threats such as Russia and Iran.

As for the Chinese people, Chang says they are learning more and more about what is happening in their country despite the censorship and propaganda. He notes that the CCP is currently the most oppressive organization on earth, besides perhaps North Korea. Oppressive systems of government usually fall apart when people become either desperate or they have hope for change. Because the Chinese economy is stagnant at best, home prices are falling, and COVID-19 restrictions are causing much unhappiness, Chang believes there are rumblings of discontent in China.

When asked what concerned Americans can do to defend their country against the threat of China, Chang says that Americans need to elect candidates who will not compromise with China as well as not buy products that are made in China, as much as possible. He says we need to support legislation that requires country of origin labeling so people can be informed about where their money is going, and won’t be sending money to China, which the regime will use to build its military. “Yes, these are just a little bit, but if we all do them, it makes a difference,” says Chang.

Watch the full episode for more in depth information on this important topic, and share it so others can help defend their country against this prevalent threat.