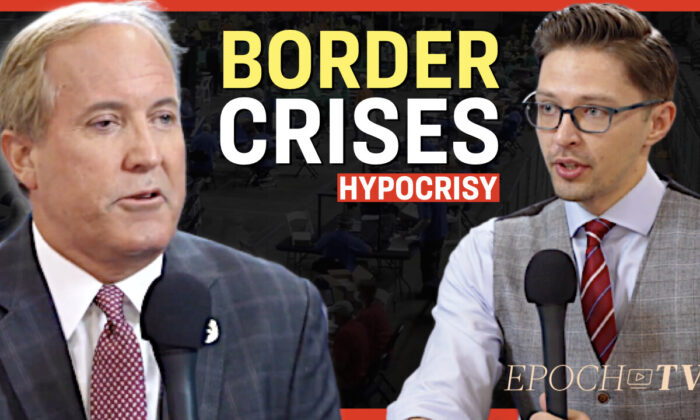 In my opinion, we’re incredibly lucky as a country that the Republic of Texas became the State of Texas way back in 1845. This is where proponents of the 1619 Project emerge from the bushes to hurl eggs and maybe industrial grade fireworks in my direction since it joined as a slave state, but we’re fortunate to have Texas in our union, even though we got California at the same time. The Lone Star State is currently at the front lines of the fight to maintain our constitutional freedoms, defend states from federal overreach, and even to secure our borders—a task that should not fall on its shoulders. All of these topics are touched upon in “Ken Paxton Explains Hypocrisy Behind Border Crises, 500+ Election Related Lawsuits,” the Sept. 4th episode of “Facts Matter.”

Host Roman Balmakov catches up with Paxton, Texas’ Attorney General, at the Texas CPAC held in Dallas this past July. This was well before passage of the Texas Heartbeat Bill that has the media and high profile Democrats comparing Texas legislators to the Taliban, President Biden’s tyrannical vaccine mandate, and the joint Texas-Louisiana victory against the Biden Administration regarding the deportation of criminal illegal aliens crossing into the United States. With White House Spokeswoman Jen Psaki declaring just days ago that migrants crossing illegally into the United States would be subject to neither the vaccine nor the mask mandates foisted upon the citizenry, it’s a really good time to review the many fronts Texas is fighting not only for the good of its state but the country as a whole—whether or not Democratic strongholds like California and New York see it that way.

In just under fifteen minutes, Balmakov and Paxton cover a number of topics that have continued to be largely swept under the rug—or outright misrepresented—by the mainstream media. Starting with Paxton’s fight against federal overreach, the two discuss the Texas-Louisiana lawsuit against the Biden Administration regarding the social cost of greenhouse gas scores enacted by Biden via executive order on his first day in office. The Social Cost of Greenhouse Gases scores (SC-GHG) scores punish nasty, no-good carbon emitting companies with a hard dollar amount meant to offset the damage they’re hypothetically doing to the environment, while rewarding companies that embrace initiatives to “Go Green.” It’s another way for the federal government to try to pick winning and losing businesses rather than letting the market sort it out, a kind of socialism-lite meets “Black Mirror” (a British science fiction TV series) deciding which businesses are good and which are bad, and Paxton is having none of it.

Paxton and Balmakov also discuss the ongoing crisis at our southern border. The media would love to have everyone in the country not living in a border state think the numbers of crossings are par for the course. But considering that the current administration lost track of 1,500 migrant children released into the interior, over 200,000 migrants were captured crossing the border illegally in July, and 40,000 COVID-19 positive illegal migrants were sent off across the country that same month, it’s obvious why most news outlets aren’t looking too hard at this issue. Whether it’s the deplorable living conditions these illegal aliens find themselves in, the number of migrants with criminal histories who have been given an appearance ticket and told, ‘See you later! (wink wink);’ or the flood of drugs pouring in, because Border Patrol agents can’t save kids from the Rio Grande and stop smugglers at the same time; none of the results of the administration’s policies can be considered par for the course.

Paxton outlines multiple lawsuits Texas has filed against the Biden administration aimed solely at requiring they enforce the law. This is a foreign concept to the current president as we’ve seen over and over again, usually in direct contrast to his numerous claims on the campaign trail that there were certain things he just couldn’t do. Stemming the flow of illegal migration isn’t the only thing Paxton is concerned with regarding the southern border, as he explains to Balmakov the steps they’re taking regarding the border wall. Texas’ call for help from other states to continue the construction Biden stopped was quickly and famously answered by Ron De Santis of Florida, but half a dozen other states have since joined the effort. As Paxton says, it truly is in the country’s best interests to have the wall completed given the increase in drug and human trafficking that doesn’t stop at the Texas state line. Biden’s policies have emboldened the cartels, who make money on every illegal alien who crosses the border whether they ultimately survive or not (and many don’t). Paxton outlined Texas’ fight against the administration to have the lands seized for the border wall returned to state control, and mere days after the close of the Dallas CPAC the Texas Land Commissioner filed suit to force the administration to start building the wall again, citing the land the federal government seized for the project.

The media won’t report on any of this, of course, and Paxton states plainly it’s because they’re running interference for Biden. This is obvious to anyone who has seen footage of the child housing facilities alone, where kids are packed in shoulder to shoulder and sleeping on the ground under space blankets. Clearly the mainstream media doesn’t want the populace to see that the kids in cages have returned in full and then some under Grandpa Joe—otherwise AOC would have already been photographed fake-crying at a fence.

The interview closes on a discussion of election integrity and the steps Texas planned to take to address it. The day after CPAC, the Democrats from the Texas legislature fled to D.C. and into infamy on the premise that there weren’t any problems with voting in Texas, and any attempts to strengthen voting laws was nothing more than the return of Jim Crow. This narrative has been blasted loudly and inaccurately across the mainstream, and it might shock the average voter to learn that Texas had over 500 active election fraud cases open as of the taping of this episode. The cases they currently have in the works are at all levels of government, and many areas where there are active fraud cases are unwilling to give the state any help in gathering evidence. Yet journalists are baffled as to the reasons why so many people no longer believe we have free and fair elections in this country.

This is a great interview to watch and share across social media, especially among those who think immigration isn’t a serious problem that we need to deal with, and that anyone who wants to build the wall is simply terrified of brown people. For a political party that is obsessed with making their neighbors wear masks and get the jab, they sure don’t care that along with the sex trafficking and drugs, the people flooding across our border by the tens of thousands may also be bringing COVID-19. There’s a reason we have checkpoints at our border where we can test legal immigrants for illnesses and quarantine them if necessary, but in what Paxton believes is a drive to increase the number of people voting Democrat, that all falls to the wayside. It’s good that we have Texas then, which could have remained its own country, standing up for all of us even when the Biden Administration won’t.