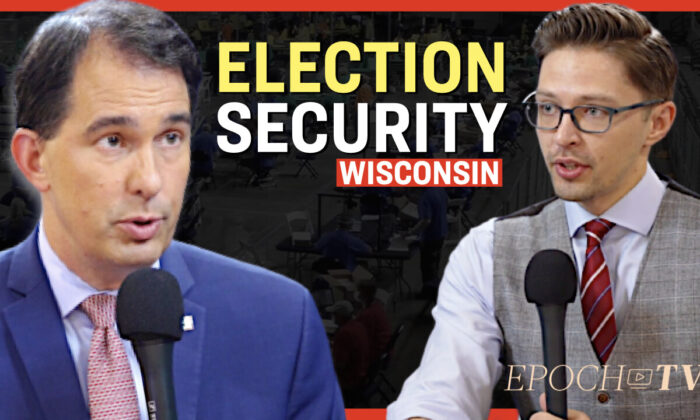 It’s endlessly irritating that nearly a year past Nov. 3, 2020, you still can’t post on social media any kind of question regarding the “most secure election in history” without at the very least having your post slapped with a fact check. You don’t even have to suggest there was any outright fraud, or that any of the weird things that happened on election night would have had any impact on the outcome, you simply can’t mention that there were some irregularities without practically being accused of wearing a tinfoil hat. These same fact checkers will never explain why there is any harm in asking questions if the election was so secure, particularly now that nothing could be done about the outcome even if God himself came down and handed over evidence that some of the votes were tampered with. It is the epitome of free speech suppression, which, despite the title, is one of the main topics of “Wisconsin Election Officials Ignored the Election Laws on the Books: Scott Walker.”

Walker, of course, is the former Republican governor of Wisconsin, one of the Rust Belt states that went for Trump in 2016 and seemed to be going for Trump again in 2020. Ultimately, it was one of a handful of states where Trump had a comfortable lead over Biden in the wee small hours of the morning of Nov. 4; a lead that subsequently vanished by dawn. Trump’s lead of over 100,000 votes dwindled to nothing, and Biden officially won the state by 20,000 after all the mail-in ballots had been counted. Walker has some things to say about those mail-in ballots, but that’s for later in the program.

Host Roman Balmakov begins this episode of “Facts Matter” discussing a new role Walker has as president of the Young Americans Foundation. Walker has gone from taking on union bosses and fending off a recall election to tackling the issue of the rampant censoring of free speech and freedom of expression taking place all over college campuses nationwide, and sometimes even at the high school level. The left is fond of dismissing the idea that anyone is kept from speaking their mind at any center of higher learning, insisting that students shouting down classmates or invited speakers have every right to use the heckler’s veto because words are violence, but it’s all a bunch of malarkey. It’s not a secret that colleges and universities lean left, though in the last decade or so it’s been more of a lurch to the left, and Walker has now joined the fight in helping conservative college students find their voices.

As a millennial, Balmakov speaks of many of his friends who are afraid to voice conservative opinions in what has become a common form of self-censoring on the right. Walker agrees that not only is this happening, but it’s a much bigger problem than just having a post flagged or taken down. With the left-leaning indoctrination taking place on college campuses, in business, and sometimes starting even in grades K–12, anyone holding politically conservative opinions doesn’t only face cancellation on social media. The zealous adherence to everything “woke” leaves conservatives in danger of facing isolation at work, losing friends, missing opportunities to make business and social connections, essentially risking a kind of social death if they don’t parrot the “correct” line of thinking. Multiple well-known commentators have talked about losing most of their friends after abandoning left-wing orthodoxy, though those individuals are often well established and can take the hit. Young people just starting out are in a far more tenuous situation, so Walker is stepping up to the plate to let them know they’re not alone, help them bring conservative speakers to campus, and show them effective ways to reach out to others to spread the ideas of freedom and liberty, and to combat the push at universities to churn out good little communists at the end of four years.

Social media is working in more ways than just errant fact checking or taking down posts to make young conservatives feel like they’re the only ones not carrying water for the left. Balmakov and Walker discuss something as seemingly benign as stickers on Instagram, which should, theoretically, correspond to a wide range of viewpoints. Instead, Balmakov notes that during the 2020 election when he would post things about Donald Trump, the stickers were a 50/50 split of positive to negative, but the stickers for Biden were 100 percent positive. Walker agrees, saying that it’s a challenge to find corresponding conservative stickers when posting his opinions, yet every single left-leaning catch-phrase or virtue signal is there. It’s done to make young, conservative users of the platform feel like they’re out of step with their peers, making it even more important to let conservatives know they’re not alone, and that freedom will always be superior to other forms of government like communism and socialism.

Balmakov takes the opportunity to point out that multiple surveys show younger conservatives are becoming rarer, however, which may be a reason for the popularity of left-leaning stickers. A third of millennials support communism and half of Gen-Zers think socialism is just swell, something Walker attributes to a lack of teaching history and participating in civic ritual. Schools simply aren’t teaching what it means to be American any more and are focusing on what divides us rather than unites us. Walker harkens back to his childhood when everyone sang the national anthem because it was the national anthem. It didn’t mean society didn’t recognize Americans came from different backgrounds and might have their own traditions, but at the end of the day everyone was an American. The left has increasingly been attacking that idea, leading Walker to state that the best way for conservatives to combat the left’s divisive rhetoric is through a message of unity. Rather than stooping to their level to resort to name-calling, conservatives need to reach out to show that they are the side wanting to bridge divides, not widen them.

Because it is such a hot button issue, Balmakov is sure to ask what can be done about one of the biggest tools the left is using to divide the youth of America: critical race theory. Walker calls this state-sanctioned racism, and looks to the words of Martin Luther King, Jr. as a way to combat it. He says it’s important to teach children the idea of judging someone by the content of their character, not the color of their skin, and is very clear that rejecting CRT doesn’t mean glossing over the darker periods of our history. This is the common, nonsensical rebuttal used by Democrats and leftists to dismiss anyone fighting CRT, to anyone fighting against CRT, as if huge swaths of the population suddenly decided we no longer need to teach about slavery or the Jim Crow era, which couldn’t be further from the truth. Still, Walker feels it’s important to temper these lessons from history with an understanding that our founding documents have allowed us to move toward a more perfect union. Just because our past leaders were imperfect and we haven’t reached some kind of utopia yet, it doesn’t mean the American experiment should be scrapped, especially when compared to conditions in other countries around the world.

Walker also thinks that the right needs to get much better at telling stories, and he isn’t wrong. The left is very good at tugging at the heart strings to the point where emotion can override reason, such as convincing nearly the entire Democratic voter base that it’s cruel not to let hundreds of thousands of unvetted migrants swarm our southern border because turning them away would be cruel. Never mind the real cruelty is encouraging parents to send their children thousands of miles away with coyotes who might drop them over a wall, dump them in a river, or leave them wandering in the desert just so the United States can misplace them once they’re in the country’s interior. Walker suggests getting speakers on campus who have escaped from communist and socialist regimes like Cuba, Venezuela, the USSR, and other countries to share their personal stories and reveal the real dangers of these forms of government and why they sought out the freedom the United States offered.

Balmakov turns to the 2020 election and the irregularities we’re not allowed to mention, as much remains unresolved a year after the fact. The Wisconsin Supreme Court recently rejected a case regarding ballot drop boxes not on the merits, but on the grounds that the case was brought improperly. It was a 4–3 ruling, something that has been relatively common when it comes to any effort to untangle the confusion surrounding the 2020 election and how so many key states flipped just enough overnight to hand Biden his victory. Walker wastes no time voicing his support for an earlier case that was also thrown out, which challenged the mail-in ballots themselves. According to Walker, over 200,000 mail-in ballots violated one of two state statutes. First, about half the ballots were handed out by clerks rather than provided based on a written-request as required by law; and second, the ballots were signed but no address was listed—poll workers filled them in anyway. The court basically shrugged its shoulders in response to this, and even if they hadn’t, there would have been no way to remove those ballots once they’d entered the system. One doesn’t have to suggest that the vote was fraudulent to point out that things like this certainly sound improper.

Walker is more concerned at this point, however, with elections moving forward. He feels some states need to tighten their laws, but other states, like Wisconsin, already have laws in place that just aren’t being enforced. Two clerks of the largest counties in Wisconsin apparently flouted established law and nothing was done about it, leading to the chaos on election night. He sees this as the bigger problem, with the courts the only remedy if local agencies won’t enforce the laws already on the books. Balmakov wonders what can be done if the state legislature or governor’s mansion is held by a party that won’t uphold the law, particularly if courts won’t hear the cases. Walker asserts that cases need to be brought again and again until the courts finally do their job and enforce the laws on the books.

This is a great episode to share with anyone you know who is still keeping track of the 2020 election shenanigans, and even more so with anyone in your life under the age of 40. The key to reaching a younger audience with a conservative message is to let those already leaning to the right know they are not alone. It’s much easier to withstand peer pressure at an older age, and Walker is old enough to project the necessary gravitas to reach out to the younger generation while still being young enough not to look like a fossil to whom they can’t possibly relate. With a running time under 15 minutes, it’s even short enough to hold the attention of a generation obsessed with TikTok and Twitter, and just might get through to some of them.

“Facts Matter” premiers every Saturday at 6 p.m.—exclusive on EpochTV.