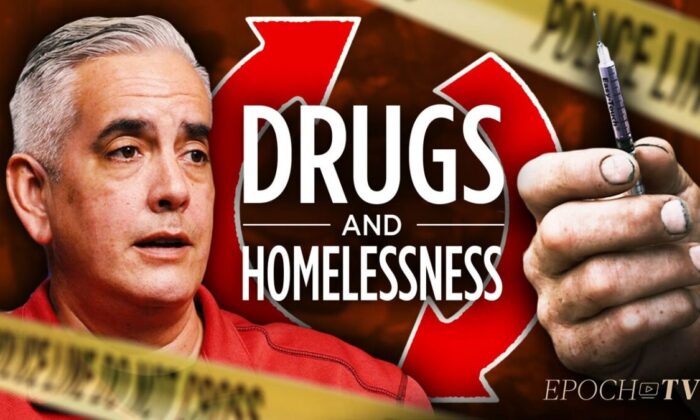 Join Siyamak Khorrami for an enlightening episode of “California Insider” as he interviews former homeless drug addict Tom Wolf, who is now a recovery advocate. In the episode, Wolf talks about the rampant drug dealing among the homeless encampments in San Francisco and what measures must be taken to actually help people living on the street break from addiction and get back on their feet.

In regards to the homeless situation in San Francisco, Wolf says it is out of control. The city has between 8,000-17,000 homeless people on the street. Seven to eight out of every ten homeless people are dealing with addiction or some type of mental illness. The problem has grown exponentially to levels never seen before. Certain areas of the city have as many as 700 RV’s or cars parked with people living in them, as well as thousands of tents and tent encampments that taxpayers are paying for. Amidst all this, the state of California is defunding the shelter system, resulting in only having enough shelter space for about 30 percent of the homeless population.

When asked to explain why so many people are homeless, Wolf says drug addiction. According to the Point in Time reports, done nationally to count the number of people experiencing homelessness in a single night, the main cause of homelessness is job loss. However, Wolf says what the report doesn’t include is the reason why these people lost their jobs. Wolf explains that he lost his job because he was a drug addict, shooting up on his lunch break and then falling asleep at his desk. He says that people don’t always admit to their drug addiction and that drug addiction is very under-reported.

Wolf describes his experience living on the street, saying that it is exhausting, especially if you are an addict because everything you do has to have the end result of getting drugs. Shoplifting, incidents of violence, carjackings etc. have all risen in San Francisco. Stores on streets that used to be thriving are now closed due to crime and shoplifting that has killed business. “That’s not to say we’re criminalizing the homelessness, but you have to admit the truth,” says Wolf. “When you’re a drug addict, and you’re on the street and you don’t have the money to support your addiction, you’re going to do pretty much anything to get those drugs.”

San Francisco has a problem with organized cartel drug dealing, with well-organized drug dealing rings operating in plain sight. One neighborhood Wolf examines has 10 to 12 individuals on a given day standing on street corners working in shifts selling drugs. Most of these people actually live in surrounding suburbs, not San Francisco, and they commute to the city to work their drug shifts. Wolf says that like Amazon, drug dealing thrived during the pandemic. “It’s the only business that did good during the pandemic in San Francisco. Business was booming for drug dealing on the street and that’s a fact.”

The police know of the dealing and they do their job by arresting the drug dealers. One police station arrested 786 people for felony drug dealing. However, almost 300 of those people were repeat offenders. This indicates that the district attorney and the courts aren’t doing their job by holding repeat offenders accountable for selling drugs, namely fentanyl, which is exponentially driving overdose rates in the country. The United States has had 93,000 deaths in the last year from a drug overdose, much of the overdoses attributed to fentanyl. San Francisco alone had 712 people die from a drug overdose this past year, mostly from fentanyl that is being sold by these organized dealers.

Wolf talks about his personal experience holding drugs for the dealers so that if the dealers got stopped by the police, they wouldn’t have as many drugs on them resulting in less severe charges. He said they would pay him with drugs. The first time Wolf got arrested, he had 4 oz of heroin on him and he thought he would go to prison. Instead, he was released after only 16 hours and sent back into homelessness. That cycle continued over the next three months until his 6th arrest, where he was finally not allowed to be released so quickly. Wolf got clean in jail and said that was the intervention he needed. Prior to his drug addiction, Wolf was middle-class, married, had a home and a job making 80,000 a year. He left it all for drugs. After getting clean in jail, he went to drug rehab and was able to find recovery.

Wolf talks about measures nonprofits and politicians have taken to house the homeless and “manage addiction” and explains why this is not effective. He explains housing the homeless does not encourage them to recover or break free from it, it enables them to live in a box and keep playing games with their life. He says most people believe the root cause of homelessness is simply a housing issue, but it is really a drug and a mental illness issue. Many of the people on the streets are institutionalized from being in prison, or they have been on the streets for a very long time, and many are suffering from trauma or mental illness, as well as drug addiction. Some have criminal records, which also doesn’t help them get a fresh start.

He says cities that are trying to help are spending way too much money by giving multiple grants to nonprofits that are all doing the same work. There is no oversight over how the money is spent, and there is no accountability for real results. He says that building everyone a brand new appointment will take a 100 years and then the city will turn around and see another several hundred people homeless and be right back to where they started. Wolf says that politicians are patting themselves on the back because of the money they are allocating for homelessness, but this money is being used to pay multiple nonprofits to do something that one nonprofit could do for a fraction of the cost. More importantly, these efforts are not even dealing with the root cause of the problem. “House as many people as you can, but until you start addressing the underlying causes, we’re not ever going to end it,” says Wolf.

Wolf explains that the first step to solving homelessness is addressing addiction, then mental illness, then root issues after that. If someone is a drug addict, they can’t make logical decisions or stay alive long enough to actually get the help they need to rehabilitate and get back on their feet.

He says that treating drug addiction is hard in the current system, unless intervention comes through the criminal justice system, like it did for him. The reason for this is because people have to wait for long periods of time to get into a treatment program and find a bed, where in jail it can happen right away. People can’t stay sober while they wait, so they change their mind or keep using because their withdrawals are so bad, and oftentimes they forget or even die before they can come back. He proposes having homeless outreach teams, with case managers in mass quantities on the streets talking to people who are struggling and giving them real options that start with a shelter system first, real access to treatment and services, and as they progress they can get into some type of permanent housing.

Politicians need to understand that addiction and mental illness play a much bigger role in the homeless crisis. Wolf believes the homeless crisis will be the undoing of society if the country doesn’t do something to stop it. As of now, cities don’t have the infrastructure in place to build their way out of it. He says even the politicians he speaks to don’t know where people can go in their state to get a detox or get drug treatment, so how are people with no technology and no connections or help going to find proper resources?

Wolf believes that the issue of homelessness has been politicized, and because of that bad decisions are being made because they are driven by ideology rather than by logic, compassion, or common sense. Wolf urges people to speak to their local political leaders about the homeless situation in the areas they live in and make it a number one issue because that’s exactly what it is.