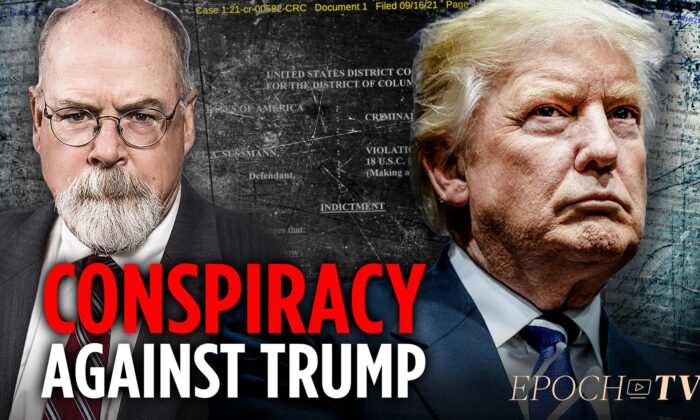 After years of Russia-collusion narratives and special counsels, it appears there may be some truth coming to light at last. Don’t miss the latest episode of “Truth over News” with Jeff Carlson and Hans Mahncke, as they unpack the recent indictment of Michael Sussmann and reveal key information regarding the Clinton campaign conspiracy against Donald Trump.

Michael Sussmann, a privacy and data security attorney as well as a former Clinton campaign lawyer, has now been indicted by special counsel John Durham for lying to the FBI and planting manufactured evidence in order to prompt the FBI to investigate Donald Trump. The indictment provides detailed insight into how the Trump-Russia collusion story was manufactured by the Clinton campaign and forced on the American people to influence not just the election, but Trump’s entire presidency.

Michael Sussmann’s indictment has brought crucial information forward regarding a group of individuals who worked with him to devise allegations regarding a secret communications channel between the Trump campaign and a Russian bank. This group was successful in instigating an FBI investigation of Trump under false pretenses, as well as having influence in the Steele dossier, which was a political opposition research report that later was proved to be nearly completely false.

According to John Durham, who was appointed special counsel to investigate the origins of the FBI investigation into Russian interference in the 2016 U.S. presidential election, the FBI would not have opened an investigation had it not been for the manufactured evidence provided to them by Sussmann. Much additional information has come forward showing the Clinton campaign’s underhanded practices designed to undermine the Trump campaign and create false pretenses to trigger an FBI investigation into Trump.

Sussmann’s law firm, Perkins Coie, appointed Sussmann and his partner, Marc Elias, as the two premiere lawyers overseeing the representation of the Clinton Campaign and the Democratic National Committee during the 2016 presidential election. Sussmann and Elias hired Fusion GPS, an internet research firm, to conduct opposition research against then-candidate Trump’s campaign. Fusion GPS went on to hire counterintelligence specialist Christopher Steele, who wrote the Steele dossier, which alleged collusion between the Trump campaign and Russia prior to the 2016 presidential election.

Some of the newly discovered information reveals members of Sussmann’s group acknowledging to one another in private communications that anyone with the proper knowledge would ultimately dismiss the charges against Trump—one even saying, “you do realize we will have to expose every trick that we have in our bag to even make a very weak association,” adding that “the only thing that drives us at this point is that we just do not like Trump.” Yet, the false narrative would be amplified by media reports, which would reinforce the Clinton campaign messaging.

All participants described in Durham’s investigation have been identified. Some have long time ties to the Obama White House as well as business ties to internet companies that had vast amounts of non-public data. One member has since claimed being offered a top cyber security position in Hillary Clinton’s administration and said that his goal was to support a narrative regarding Trump that would please certain VIPs.

The timing of Sussmann’s allegations, Clinton campaign messaging, and media narratives fall together all too conveniently. Sussmann’s group began data collection the day after Trump won the Indiana primary, making him the presumptive nominee for the Republican Party. Carlson and Mahncke also discuss information regarding the Steele dossier, which was issued days before Sussmann gave the Trump bank allegations to the FBI. According to the hosts, the Steele report was meant to create a false corroboration in advance of Sussmann’s meeting with the FBI.

The Clinton campaign in turn set the stage for a public rollout of the allegations, with Clinton Campaign Manager Robby Mook publicly suggesting in an interview that the Russian government could be behind the release of DNC emails in an attempt to help Donald Trump, saying “this isn’t my assertion, there are a number of experts that are asserting this. That is what experts are telling us. Experts have said that it is the Russians that in fact went in and took these emails and if they are the ones who took them, then we have to infer that they are the ones who are then releasing them.”

Two days later, Hillary Clinton apparently approved the proposal by one of her foreign policy advisors to “vilify Donald Trump by stirring up a scandal claiming interference by Russian security services.” Hence, the Trump-Russia collusion narrative was born. Not long after, the Steele memorandum was hastily produced, in which it alleged a well-developed conspiracy between a Trump associate and the Kremlin, claiming a Trump associate admitted to corroboration with Russia. Later, it would be uncovered that there was no such Trump associate.

Just 12 days before Sussmann came forward with his allegations, FBI director James Comey as well as the deputy assistant director of the Counterintelligence Division Peter Strzok were informed of Clinton’s alleged plan to vilify Trump. When Sussmann came forward to them, he claimed to have been approached by multiple cyber experts regarding the Trump allegations, and even named three of them. However, Sussmann failed to name anyone involved with the Clinton campaign. While the FBI proceeded to open an investigation, counterintelligence specialist Christopher Steele met with media outlets to spread the narrative. The Clinton campaign in turn shared and spread the media reports in order to amplify their messaging strategy, which reinforced the claims and generated an uproar.

Sussman’s group had achieved their goal by getting the FBI to start an investigation into a supposed secret backchannel between Trump and the Kremlin. Sussmann’s group successfully planted the seed of the Russia collusion narrative, which would dominate media reporting for the next several years. The hosts note that it is not known why Sussmann is the only person indicted so far. It may be because Durham is putting pressure on Sussmann in order to get him to talk, or perhaps that Durham has another source and Sussman is simply the first domino to fall.

“Even if Durham does nothing else, he has already proven beyond any doubt that the Clinton campaign used manufactured evidence to try and take down the opposing political campaign. Their actions fundamentally undermined the democratic process,” the hosts conclude.

Listen to the full episode of “Truth Over News” to hear more behind the scenes details that reveal the conspiracy against Trump in order to influence the 2016 presidential election.

“Truth over News” premiers every Tue. and Thu. at 5 p.m.—exclusive on EpochTV.