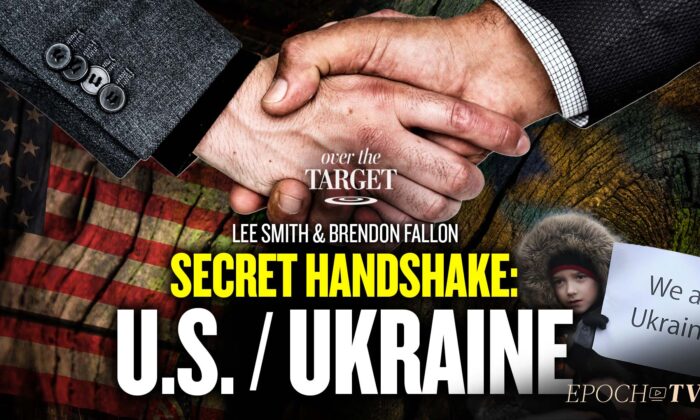 EpochTV Review: Did Biden’s Past Dealings with Ukraine Cause the Current Conflict with Russia?

In “Over the Target,” a recently added series to EpochTV, host Lee Smith and Brandon Fallon talk about the conflict that has been brewing at the Russia–Ukraine border. Will America get involved, and what is the media not telling the American public about the root cause of this conflict?

Currently, tensions are running very high at the Russia–Ukraine border, with Russian President Vladimir Putin having over 100,000 troops stationed there. America has advised its citizens in Ukraine to come back. Although the United States may not be deploying troops at the moment, Lee Smith says that it’s absolutely involved in this conflict by being involved in its origins, which Smith claims begins with Russiagate.

Russiagate is the information operation that was run through the American media and pushed by intelligence services, namely the FBI, and asserted that President Donald Trump and Putin had colluded to relieve Ukraine-related sanctions on Russia in exchange for Putin helping Trump win the presidential election. The idea that Trump would relieve sanctions on Russia related to its 2014 incursion into Ukraine and seizure of Crimea is at the heart of this conspiracy theory. Smith says this information is also the central part of the infamous Steele dossier that is often overlooked.

Smith says in order to understand the significance of the current conflict with Russia and Ukraine, one must look back at 2013, when protests broke out in Kyiv that were referred to as the Euromaidan Revolution. The so-called revolution ended in February 2014 when the elected leader of Ukraine fled Kyiv and went to Moscow. As details unfolded, it appeared that the United States had a significant role in ousting the Ukrainian leader in what looked more like a coup than a revolution. Shortly after installing new leadership in Ukraine, senior Obama officials began visiting the country, leading people in that region to see the actions of the United States as an admission of CIA and government official involvement in the Ukraine coup. This sent a message to Putin and others in that region that the United States was willing to put its own preferences in government positions in Ukraine and that the United States is able to use Ukraine as an instrument to destabilize Russia. Many American foreign policy officials see Ukraine as an easy way to contest Russia in Russia’s area of influence. Russian officials see this as well.

Did Democrats’ Secret Deals with Ukraine Put America on Road to Conflict with Russia? | Over the Target [Full Episode]

It may seem surprising that the events unfolding now are tied all the way back to the Obama administration. However, when examining geopolitics, it’s important to understand that geopolitics is about two things: land and politics. In order to understand the subject, we need to understand the history surrounding these two geographical areas and the politics that are in Putin and Biden’s memory. What Americans are seeing in the news today is just the tip of the iceberg of what is really going on in the region, and why it is happening to begin with.

One month after then-Vice President Biden visited Kyiv in 2014, his son Hunter Biden was named to the board of a Ukrainian energy company. Hunter wasn’t hired for his expertise, but for the protection he offered from his father, the vice president.
Smith says it is also important to note how the Democratic Party and U.S. officials have used Ukrainian politicians to advance U.S. political agendas. Ukraine has been at the center of various impeachment efforts targeting Trump, such as in 2019 when Trump was accused of proposing a quid pro quo with the Ukrainian president over a phone call. As it turns out, Trump was actually looking into the quid pro quo appearing to happen between Joe Biden and Ukraine, when Joe Biden publicly threatened to withhold a loan guarantee destined for the Ukrainian government if the person investigating the company his son Hunter Biden was working for didn’t get fired. “What we’re looking at right now are the consequences of what the Biden family did in Ukraine,” says Smith.

The imminent conflict is a result of Putin responding to not just Ukraine, NATO, or Germany. The conflict is a result of Putin also responding to the Biden administration and the fact that the White House is led by a man who has been involved in Ukraine dating back to 2013 and has a proven track record of leveraging his position and national interest for his own personal gain. American news audiences don’t understand what is really going on in Ukraine because all this information was buried by other events, such as the Trump impeachments, or masked by so-called disinformation campaigns, which is what the media labeled information relating to Hunter Biden’s laptop. Hunter Biden’s laptop revealed his and his father’s relationship with Ukraine and how they had used foreign policy and leveraged national interest for their own gain, but the media masked it by essentially calling it a conspiracy theory.

Smith says the events unfolding in Ukraine today should serve as a lesson for history because it shows the dangers of a small power like Ukraine getting involved in the affairs of major powers. With Russian troops amassing at the border, Ukraine is certainly suffering the consequences now. Smith points out that Putin did not move on Ukraine while Trump was president. Putin moved when Biden became president because Putin understands what Joe Biden has done in the past, which is leveraging American foreign policy and national interest to advance the narrow and personal goals of his own family. It is important for the American people to understand that many of our policymakers have shown themselves to do unwise and wrong moves rooted in personal interest. Smith says that the American public needs to be informed and understand Biden’s role in creating this conflict, why Putin sees Biden the way he does, and why Putin is concerned.

Watch “Over the Target” exclusively on EpochTV.