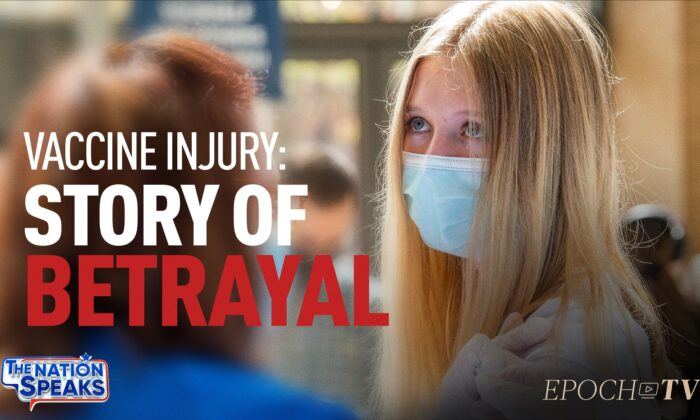 In an episode of “The Nation Speaks,” host Cindy Drukier addresses the Biden administration vaccine mandate, whether or not the government’s reaction to the COVID-19 pandemic was necessary and effective, and shares important stories from vaccine clinical trials patients regarding how their adverse reactions were excluded from the clinical trial reports.

After 20 months of government measures to counter the threat of COVID-19, the Biden administration rolled out its federal mandate, via the Labor Department’s Occupational Safety and Health Administration, or OSHA. According to the mandate, as of Jan. 4, employers with 100 or more employees must be either fully vaccinated or tested weekly at their own expense. The unvaccinated must also wear a mask at work. This rule affects roughly two thirds of the labor force, which is approximately 84 million workers.

The second part of the mandate applies to workplaces that are part of Medicare or Medicaid, such as nursing homes and hospitals, stating that those employees must be vaccinated and do not have a testing option. This affects 17 million people. The cost of noncompliance for companies is up to $14,000 per violation.

Drukier interviews John Tamny, director of the Center for Economic Freedom at FreedomWorks. His latest book is titled “When Politicians Panicked: The New Coronavirus Expert Opinion and a Tragic Lapse of Reason.”

In regards to the vaccine mandate, Tamny says that the government can’t force outcomes on people, but what they can do is let free people discover.

“Most Americans were going to get the vaccine because they felt it was the right choice. And precisely because some were not, those were the people who were going to produce information if there was an adverse outcome from not being vaccinated,” said Tamny. “Without those adverse outcomes people don’t have proper information to act on. If it’s true that the vaccine is going to save lives, you have to let some people not take it so that they can learn that this is a life saving measure. Instead the government is just using force with typical results.”

When asked why he believes the lockdowns defied common sense, Tamny says the more threatening something is, the less need for use of force. Because the virus was predicted to threaten people in such high numbers, Americans were already taking measures to protect themselves by social distancing and staying home. The idea that the threat of COVID-19 required the government to keep people from doing their jobs, operating their businesses, and living their lives in order to keep them safe was unreasonable; they didn’t need to be told to do those things unreasonably when they were already making adjustments to stay safe and keep others safe.

He also noted that we need people to go against the grain in order to know how the virus interacts with certain behaviors and what behaviors actually work and what don’t. To take the control group out and force everyone to do the same thing defies common sense because now people don’t really know if what we are doing is the most effective response. When the United States needed this information most, we chose lockdowns and blinded the population to the threat of the virus.

“We need people trying different things so you can find out what is the truth about the spread of the virus, what behavior actually causes it, and how do you avoid it. You don’t get to that point by one size fits all solutions,” Tamny said.

Drukier goes on to share the stories of those who took the shot and experienced adverse reactions. Sen. Ron Johnson (R-Wis.) is trying to break through the silence by holding press conferences and expert panels on federal vaccine mandates and injuries, bringing in experts and clinical trial patients who are brave enough to talk about their experience. She notes that many are not able to come forward and speak about what happened to them, because they are no longer alive to do so.

From the COVID-19 vaccine itself, over 19,000 deaths are reported, 21,116 life threatening events, 29,000 permanent disabilities, 101,214 emergency room visits, and 94,758 hospitalizations. It is also important to note that a Harvard Study showed fewer than 1 percent of all vaccine adverse events are even reported to VAERS.

Maddie de Garay is a 12-year-old Pfizer clinical trial participant who is now forced to use a feeding tube. Her mother said it has been over nine months since she got her second dose. She cannot walk and is in a wheelchair. She has constant pain in her stomach, back, and neck, and can’t feel her legs. Her mother says that is just the tip of the iceberg.

Upon getting her first dose, she had a normal reaction and it went away within a few days. The second dose caused pain that led to an emergency room visit, and in less than 12 hours she had pain, numbness, and electric shocks in her back and neck, and much more.

“The app only allows you to record solicited adverse events, like fever, redness, injection site pain, swelling, headache, vomiting, and other typical expected reactions. That is it,” her mother said.

The doctors involved in the clinical trial told Maddie’s mother to check for appendicitis, which her daughter did not have. A New England Journal of Medicine article whose lead author is the principal investigator for Maddie’s trial made no mention of any of Maddie’s adverse reactions. In the EUA amendment to the article, her reactions were reduced to only five lines, in which they claimed she was eventually diagnosed with functional abdominal pain. Essentially, a stomach ache. Maddie’s mother asked if a stomach ache usually puts a child in a wheelchair or a feeding tube.

“I thought that Maddie was in the best hands possible in the rare chance she had a severe reaction. That was not the case. They did everything in their power to hide everything. If they minimized Maddie’s reaction to the vaccine like this, I wonder what really happened to those in the clinical trials who had a reaction to the first dose,” she said.

A preschool teacher told of her adverse reactions and that she thought she was alone, but eventually found others who had experienced the same thing. They reached out to their representatives, the CDC, the media, major health organizations, and state health boards and departments, and were met with resistance. All these agencies persisted in the narrative that if this was really happening, then the CDC and the FDA would have said so.

“We are completely on our own, all we have is each other. We have been branded as anti-vax and misinformation,” she said.

She added that less than 24 hours after Johnson’s event, a Facebook support group she was part of was dismantled and she lost contact with actively suicidal people in an instant. Through tears, she said: “We need the CDC to acknowledge us. A very simple act would change everything for the sick and suffering.”

The teacher went on to say that, “As a participant of a clinical trial, I was constantly reassured that if something were to go wrong, there would be thorough and meticulously developed protocols in place to provide a safety net.” She explained that because her reaction was so severe, she was dropped from the trial and not allowed to get the second dose. Her data was excluded from the trial results, and her access to the trial app was deleted.

The clinical trial report says individuals who dropped out chose to forgo the second dose, which is very different from what really happened.

The report also says that serious adverse events would be recorded from the time of informed consent through day 730, but she last heard from them on day 60.

Johnson has appealed to the public to listen and share these people’s stories so that they are heard. He said that the basic human tendency is to never to admit you are wrong, but we have to acknowledge reality and admit there have been side effects that have changed people’s lives forever.

“The Nation Speaks” premiers every Saturday at 4 p.m.—exclusive on EpochTV.