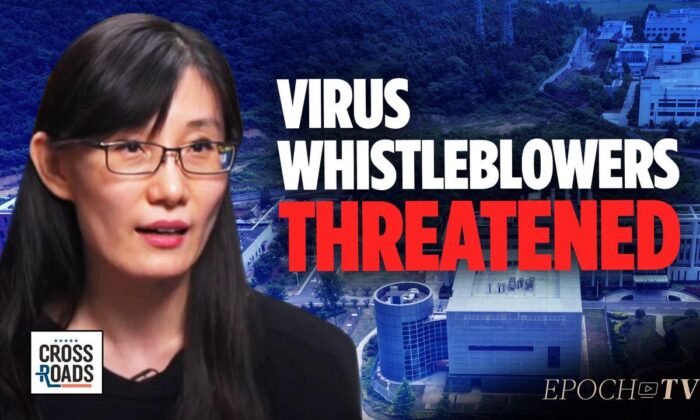 EpochTV Review: Chinese Virologist Defects to the US and Becomes a Whistleblower About Virus Origins

The Chinese Communist Party (CCP) has been threatening whistleblowers on American soil, specifically individuals who have been involved in the origins of the COVID-19 virus. One of these whistleblowers is Doctor Li-Meng Yan, a virologist in Hong Kong who has since defected to the United States. In the latest episode of “Crossroads” on EpochTV, Joshua Phillip interviews Dr. Yan regarding her experience uncovering and spreading the truth about the COVID-19 pandemic.

Yan says she has been threatened by the CCP since leaving China that it would make her “disappear in America.” Phillip cites the CCP’s “Operation Fox Hunt,” where the CCP was abducting people, threatening, and encouraging people to kill themselves, even those on American soil. When asked what group is responsible for these threats, Yan says it doesn’t matter because they are all either well-trained CCP agents or hired and sent from China to America to conduct tasks for the CCP. The requests all come out of the central government and are designed to hunt and silence those who are considered dangerous to the stability of the Chinese regime.

Yan was a virologist in China, at the University of Hong Kong School of Public Health, working at the WHO H5 lab, which is the National Laboratory for Emerging Infectious Disease for the Chinese government. Her work involved the study of the influenza virus and vaccinations, and later on the SARS-CoV-2 virus. According to Yan, the intelligence she collected in her confidential investigation revealed that China has known the genome sequence of COVID-like viruses since December 2019; they knew it could transfer from human to human and was dangerous, yet they allowed it to happen. She says the CCP does not want people to know the COVID-19 virus came out of their labs and that it works as a biological weapon to target humans. In the process of covering this information up, the Chinese government has made up evidence, denied the virus was dangerous or could be transmitted from humans, and claimed that it came from nature not a lab. Yan says that the Chinese regime works together with the Chinese scientific community to make up evidence and to accuse those who expose them of misinformation crimes.

Yan explains that Chinese scientists who reported on the genome findings have since disappeared because the genome can tell you many important things. Examining the genome sequence shows whether or not it was meddled with by humans and in what manner, so any scientists who began talking about the virus being infectious and dangerous were silenced, killed, or disappeared. Yan says that the Chinese government sends infiltrators into groups such as doctor groups, and they will inform the regime if anyone is talking about any sensitive words, such as lab or origin Even medical people cannot talk freely with one another. “It’s very dangerous,” says Yan. She also notes the CCP has people working for them to spread rumors in order to discredit and undermine the influence of opposing information coming out.

Yan explains that the so-called “red line” in China is invisible, because the CCP could get angry over anything. People have to do what the Chinese regime wants them to do. She recalls asking her supervisor why he couldn’t get information from the CCP regarding COVID-19 even though he was an expert in that area. His response was that they didn’t want anyone to know that information and so she needed to be careful. “Then I understand. All the information about COVID-19 at that time happening in China is a whole issue the Chinese government doesn’t want you to touch. And later my investigation revealed that.” Yan says that if the CCP says there is no outbreak, or no people died, then that is what people have to say as well. If anyone even asks questions, it will get angry. People cannot discuss information with anyone, even friends, because they don’t know whether the regime is watching or if the friend will turn into an informant. Even talking to family puts a person in danger, because it damages the reputation of the CCP, and it will imprison that person or make them disappear.

Yan believes that the CCP is interested in developing bioweapons in order to advance their agenda of world dominance by 2035 or earlier. She says the CCP knows that she is a threat because of where she worked and who she worked with, which included the top scientists in the field who serve as a bridge between the Chinese military and the CCP’s international scientific campaign. She explains how the CCP used its power, money, and influence in the world to encourage other scientific communities like the CDC, WHO, and others to aid the process through risky scientific methods. Yan also explains that the CCP wants the bioweapon to have a low death rate, because that enables it to be hidden and transferred to other people easier, as well as keep their enemies unaware of what is really going on while the CCP works to destroy their economies.

In the episode, Yan goes into great detail regarding the SARS-1 virus and how the genome sequence has been changed and what ramifications those changes have. She explains how the WHO worked closely with the Chinese regime to cover up the lab leak and spread misinformation, as well as how pharmaceutical companies are benefiting and profiting from the activity started by the CCP.

Yan says she was inspired by the protests in Hong Kong. “I realize how evil the CCP can be. They want to grab freedom, democracy, human rights—all those basic things—from the people and once people start to fight they will just disappear or kill them.” Regarding the Hong Kong protests, Yan says that most of the protesters were young people, however there were many older people standing on the front line to stop the army from harming the protesters. According to Yan, the older protestors told the journalists, “When we were young, 50 years ago, we didn’t realize the CCP was so evil, so we didn’t stop it. And now we realize that they are evil, and we didn’t do it when we were young, so we want to do it at this moment to help our next generations. This is the only thing we can do to stop them.” Yan tells Phillip that “This is the thing I want to do to stop it, and I’m still here and I’m still alive now to share these things with people.”

Watch the full episode for more in depth information, and help spread her message by sharing this article!

“Crossroads” premiers every Tues, Thurs, and Sunday —exclusive on EpochTV.