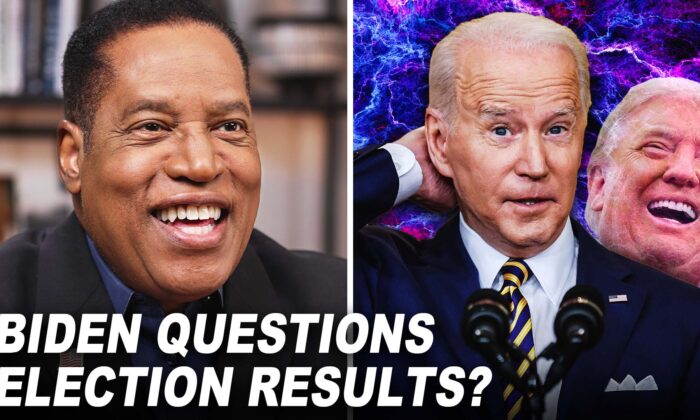 Questioning election integrity may not be new for Americans since the 2020 Presidential election, but it is new for President Joe Biden, who, when asked if there may be reason to question the legitimacy of the upcoming 2022 midterm elections, replied “it all depends.” It turns out that the Democrats are now posing themselves as the ones openly passing doubt on election integrity, and offering their “solutions,” according to Kamala Harris in an interview with NBC’s “Today Show.”

These so-called solutions are two bills that have so far failed to be passed and signed into law: the John Lewis Voting Rights Advancement Act and the Freedom to Vote Act.

In the interview with “Today,” Harris claimed that “around our country, states have put in place laws that are purposefully making it more difficult for the American people to vote.” Host Savannah Guthrie had to desperately corral the vice president back to the issue at hand, which was addressing Biden’s remarks of doubting election integrity.

“The specific question, if you don’t mind,” Guthrie said. “Does he think, now that these bills haven’t been passed, that the 2022 midterms won’t be legitimate or fair or free?”

Harris’ response was a delayed “let’s not conflate issues,” claiming that the issue at hand was whether or not Americans should have the opportunity to vote via mail or drop box instead of in-person voting. Harris also warned not to be distracted from the real issue by “political gamesmanship.” Does this mean that the vice president is accusing Biden’s concern for election integrity as being nothing more than political gamesmanship?

For a president other than Donald Trump to suggest preemptively that an election won’t be legitimate shocked mainstream news media. However, Biden has been less than candid in his efforts to get these bills passed, comparing those who oppose this legislation to racist (and Democrat) political figures of old, such as George Wallace and Bull Connor.

“The problem is, they’ve now put themselves in a corner,” says Larry Elder, explaining that Democrats can’t claim this legislation is vital to the survival of the nation and then admit the nation will be alright if it doesn’t pass.

Contrary to the latest mainstream media narrative, Republicans aren’t the only ones who have believed stories of rigged elections. Going back to the 2016 presidential election, there was a 1,000 page Senate report showing that the Russians failed to change one single vote tally. Yet, according to a YouGOV poll, 66 percent of Democrats believed that Russia tampered with vote tallies in order to get Trump elected. Seventy-eight percent of Democrats, according to a Gallup poll, believed that Russian interference altered the outcome of the election.

This belief was widely reinforced for the entire duration of Trump’s presidency by Hillary Clinton and the liberal mainstream media, despite there being no evidence to prove it, and increasing evidence that this was in fact not the case. The terms “stolen election” and “illegitimate president” did not originate with Trump, but with Clinton, and is now being unabashedly wielded by Biden. So much for Trump being a sore loser or single handedly perpetuating “the big lie.”

Thankfully for Biden, as well as for the rest of Democrat voters who may have been in danger of finally seeing the duplicity of their elected officials, the mainstream media was quick to recover from its shock and come to Biden’s rescue. For example, the Hill claimed that “the key distinction is that Trump hasn’t been able to back up any of his fraud claims in court and they have been dismissed by members of his own party.” Elder points out that Trump’s claims have been dismissed by some members of the Republican party, such as Mitt Romney, who is openly anti-Trump. However, the claims have not been dismissed by all, or even most of the Republican party.

Elder takes a look at Wisconsin, Pennsylvania, and Michigan—all states in which Donald Trump filed a lawsuit to overturn the election results.

Elder also points out that the voting rights legislation that the Democrats claim is vital to our nation does not even require a voter photo ID. Interestingly, in the European Union, 63 percent of the countries ban mail in voting unless for those living abroad, another 22 percent require a photo ID to obtain a mail-in ballot, and 22 percent ban mail-in ballots completely, even for those living abroad.

“I think legally they have a sound argument,” Dershowitz said. However, the Supreme Court did not take up the case, so the merits were never decided.

Michigan was also a very narrow decision of 2 to 1, with the dissenting justice saying that there are limited ways an absentee ballot can be procured, and that “none of these prerequisites was met in this case.”

These three states alone resulted in extremely narrow margins and were not taken up by higher courts even though they very well could have been, and some of the justices themselves thought the cases should have been. Trump’s claims about 2020 election integrity are not crazy. To call them crazy would be to call Dershowitz crazy, along with other justices who presided over the Trump campaign’s cases. Now, as Biden and Harris desperately peddle the importance of their failed bills that would have fundamentally changed America’s election laws, arguably in their favor, they have backed themselves into a corner.

Biden’s remarks pose a legitimate question to the American people: is election integrity an issue that Democrats are genuinely concerned about, or is it a catchphrase that can be used to advance the Democrat’s hold on power, both in the upcoming midterms and beyond?

Share this article and watch the full show to hear more of Larry Elder’s thoughts.