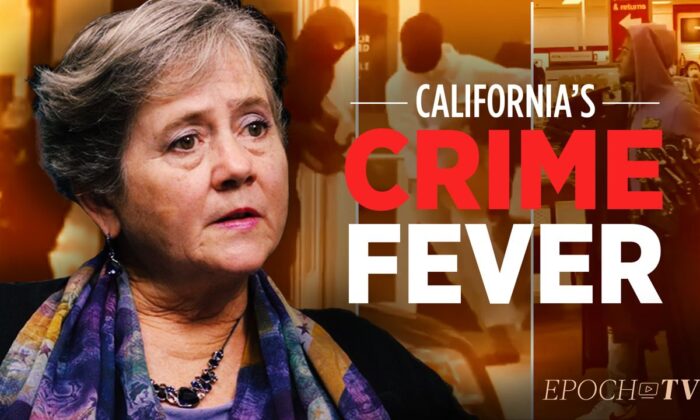 EpochTV Review: As California Goes, So Goes the Nation

In an increasingly polarized United States, it can often be tempting to let states you feel have made poor decisions, depending on what side of the political spectrum you fall, to live with the mess they’ve created. This is especially true of California, a state that many outsiders—and residents—would describe as a hot mess.

For years people have been fleeing the state, with California posting its first net loss in 2020 as 182,000 more residents left for greener pastures than arrived, much to the chagrin of states like Texas and Arizona. Unhappily for them, many Californians leave the state but take their policy ideas to their new home cities, turning places like Austin into an embarrassment for many native Texans, or tightening the Democratic stranglehold in cities like Seattle.

It’s easy to dismiss the pickle California finds itself in when residents refuse to help themselves by voting for anyone who doesn’t have a “D” next to their name, and that’s why it’s so important to watch and share the Nov. 3 episode of “California Insider.”

Host Siyamak Khorrami speaks with former Los Angeles prosecutor Kathleen Cady about the alarming new policies the current district attorney, George Gascón, has implemented in his county since he was sworn into office last year. Watching Cady detail the policies Gascón put in place might leave the viewer thinking that L.A. County’s new D.A. looked at the disastrous cash bail reform New York put into place in 2020 and thought, “I can top that.”

“How California’s Criminal Justice Reform Leads to a Crime Fever” presents a frightening look at how Gascón has tied prosecutors’ hands at the expense of victims’ rights. It’s not something that can be dismissed as just California’s problem when Californians are so happy to remind everyone else in the country that if it weren’t for that pesky little Electoral College, they’d be running the show.

The interview is straightforward, with Khorrami allowing Cady plenty of time to explain to the audience the horrific developments in L.A. County for anyone fortunate enough not to live there. It’s an excellent decision given Cady’s knowledge and involvement with the topic and her ability to provide specific, detailed examples in response to every one of Khorrami’s questions. Cady was a prosecutor for 30 years and now in retirement works with a victim’s rights group in California, trying to ensure crime victims and their families receive some measure of justice. That’s become much more difficult since Gascón came into office and decided to, as Cady puts it, dismantle the criminal justice system.

The steps Gascón has taken to accomplish this dismantling are shocking. While our criminal justice system could definitely use some reforms (even President Trump recognized this), the policies Cady outlines don’t seem designed to do anything beyond coddling criminals and re-victimizing the people upon which criminals prey. Gascón’s 61 pages of policies, which he released on his first day in office, are also contrary to the laws on the books, from not prosecuting misdemeanor crimes to barring prosecutors from trying minors who commit particularly heinous crimes from being charged as adults. These policies don’t impact the elites in their gated communities who are often proponents of these kinds of radical reforms, but they are having a devastating impact on residents and businesses in lower-income and minority communities—the same people that suffer the most when police departments are defunded.

The first item Cady dives into is bail reform, something that had already proven disastrous in New York before Gascón was elected into office. Gascón has essentially gotten rid of bail completely unless the charge is serious or violent, and on top of that has barred prosecutors from including enhancements in a charge that might increase the bail or keep someone who is a genuine threat in prison. Cady uses the example of a domestic violence incident that may or may not be considered serious on its own, but could be beefed up by including enhancements in the charge if, for instance, a gun or other weapon was used during the incident. Gascón has removed prosecutors’ ability to include these additional charges, allowing someone who brandished a weapon at a spouse or significant other to walk free without having to post bail. Another example she gives is of someone walking into a liquor store and stealing the merchandise. This could previously be charged as a robbery if the thief used any kind of force, but thanks to Gascón the enhancement of “use of force” is barred, creating a revolving door for low-level offenses that allow businesses and residents to be victimized again and again.

Misdemeanors are also no longer being prosecuted for the most part, like trespassing or shoplifting. Police are arresting the same people over and over again, while store owners report having the same thieves come in to steal the merchandise. Cady explains the anecdotes she’s heard indicating that criminals, and gangs especially, are well aware of these policies and are taking advantage of them. In fact, it may even be pulling criminals into L.A. County from other areas of the state where they know they’ll have to post bail and misdemeanors will be prosecuted. Overall these policies are creating a dangerous environment for residents and businesses, not that Gascón seems to care.

Cady cares, though, so much that she now works directly with victims who have specific protections under California’s constitution. Gascón’s policies are having a direct, negative impact on these victims, and it could potentially be argued that they violate the victims’ constitutional rights. Cady advocates for victims who feel Gascón’s mandates are denying them justice, whether it’s lessening the sentence for the criminals who victimized them, not including enhancements on certain crimes that would require bail, or any of the other reforms. She even tells the harrowing story of a client named Peggy who was being stalked by a man with whom she was briefly involved. Though the man was convicted and sent to prison prior to Gascón arriving in office, when he was released he began stalking Peggy again, to the point of issuing death threats and forcing Peggy to move. Because of Gascón’s reforms, Peggy’s stalker wasn’t set to be charged with any of the prior convictions, which would have greatly reduced any sentence he got, presuming he got any time at all. When Peggy reached out to Gascón, he suggested she get a restraining order—something she already had. The story has a happy ending thanks to Cady’s work and a judge who ignored the prosecutor’s recommendations, but Peggy is just one of the many victims being retraumatized because of Gascón.

According to Cady, many prosecutors don’t agree with these policies, but they’re mandated so prosecutors either have to enforce them or face potentially losing their jobs. Further complicating matters is the fact that Gascón brought many former public defenders with him and placed them in the highest levels of the D.A.’s office, and now public defenders have been instructed to tattle on any prosecutor who tries to buck the mandates. There’s even a form the public defenders can fill out to report a prosecutor hoping to keep a serial stalker behind bars. This forces prosecutors to comply with the policies, even if the policies go against state law by denying them avenues to pursue appropriate charges against criminals, and the basis for these policies is based on data that Cady feels is flawed. She’s represented upwards of 80 murder victim’s families since the beginning of 2021, so she has a pretty good idea of what they want when it comes to the criminal justice system, despite Gascón’s dismissive attitude that the D.A.’s office can’t just listen to the victims. While that’s true to an extent, what also seems to be true is that Gascón isn’t listening to the victims at all.

That inability to listen tends to be par for the course for the left these days, though Cady doesn’t think the criticism of Gascón is politically motivated at all. She’s a Democrat herself, but she works with both Democrat and Republican lawyers as well as working for both Democrat and Republican victims. They all agree that the issue is not with Gascón’s politics, but with his policies, which are endangering the residents of L.A. County. Public safety should never be a partisan issue, and as far as Cady is concerned politics has no bearing here. To support her assertion, she mentions that 31 city councils have expressed a vote of “No Confidence,” and while not everyone is against his reforms, Cady believes that’s because they don’t really understand what he’s done. Once it’s explained what his policies actually do when put into practice, Cady feels supporters will realize that this wasn’t what they were looking for when they voted for reform.

Another example of the kinds of reforms residents probably didn’t know they were voting for is the inability of prosecutors to transfer juvenile offenders to adult courts, no matter how heinous their crimes. As Cady explains, previously prosecutors had the ability to transfer juvenile defendants to adult courts for murder, for instance, but under Gascón there are to be no transfers to adult court for any reason, ever. This has led not only to juveniles serving insultingly brief sentences for premeditated murder, it has also emboldened gangs, who now know that a juvenile defendant can’t be kept in jail after they turn 25. As a result, gangs now send out teenagers to commit the worst acts, safe in the certainty that they’ll be out long before they turn 30.

Cady provides Gascón with some recommendations of what he could do to make his policies better, starting with listening to what the public wants, but if recent trends on the left are anything to go by it’s not likely that he’ll take her up on that. It’s even less likely Gascón will listen when Cady explains that blanket policies don’t work, because people are different, as is each individual case, and he should let his prosecutors do their job rather than letting public defenders run the D.A.’s office. She finishes the interview with a plea to unhappy Los Angelinos to get out and vote for someone who will do what they want, emphasizing that reform isn’t necessarily a bad thing, but it matters greatly how reform is implemented.

Cady is a wonderful guest, and Khorami does a fantastic job setting her up with the right questions and then letting her go. It’s hard after listening to her not to feel for the residents of Los Angeles, no matter how messy the bed they now lie in happens to be, as she gives the viewer a sense that they got where they are through naivete more than stupidity or political brainwashing. Hopefully, those still living in L.A. County have an awakening like the ones seen recently in New Jersey, Virginia, and even Seattle and New York, and find a candidate to vote for who truly cares about public safety. Watching, liking, and sharing this video may even help some of them go from woke to awake.