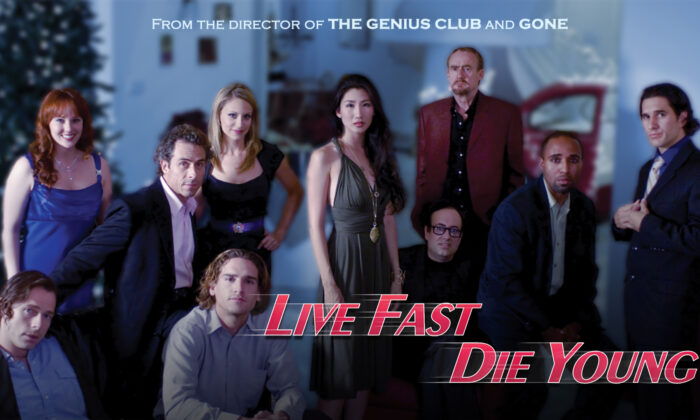 When I first read the description for the 2008 drama, “Live Fast, Die Young,” I thought it sounded interesting, to say the least. But as soon as I discovered that Timothy A. Chey had produced and directed it (as well as having a small acting role as well), I just knew I had to see it. After all, it’s not exactly a common occurrence to get a faith-based filmmaker’s fictional take on the motion picture industry.

After watching it, I felt that many of the features it portrayed could have been true for just about any industry that involves high risks, lots of money, and of course—sex, drugs, and rock n’ roll—like today’s film and music industries, as well as many others. Only a few minutes into the film, I knew it would be a fun watch, but wasn’t prepared for the insightful messages it carries.

A couple of screenwriter pals, David Putnam (Gary Poux), and Big Mack (Christopher Showerman) arrive at a mansion in the Hollywood Hills for a big film industry party. The two are almost total opposites. While David is much more reserved, Mack carries a nervous energy about him—he’s also very aggressive about getting someone of influence at the party to look at his latest script. Although the party is being held on Christmas Eve, hardly anyone knows or cares about the purpose of Christmas—the holiest of holidays.

David sees his agent, Alex Embry (Eric Feliciano), who questions whether the rumors about David becoming a Christian are true. When David acknowledges that he has, Alex tells him that doing so could spell disaster for his career. But David, strong in his faith, doesn’t flinch.

Meanwhile, Mack flutters around the party, pestering people to take a look at his script—such as A-list actor Kevin Luke (Christian Roberts); film studio head Mark Davis (Bryan McMahon), and media mogul Sidney Blackstone (Sean Lawlor). Mack might as well be radioactive because he is dismissed by every influential Hollywood insider he encounters, in back-to-back fashion.

David has a chance run-in with an old acquaintance, drug peddler Rupe (Stelio Savante). After David witnesses Rupe selling drugs to someone, so he threatens to call the police on him. However, Rupe fires back at David, saying that although the latter might act high and mighty now, Rupe knew him when he was a drug addict—before he became a Christian.

As the film progresses, we get to see a lot of backbiting, arrogant personalities, and cutthroat politicking, as when aspiring actress Michelle Lee (Annie Lee) gets canned by Mark because she wasn’t impressive enough in his last film. We also see what most people in real life already know—sleeping with certain key insiders can be the difference between making something of your film career, or having it disappear altogether.

Big-time actress Samantha Copola (Joleigh Fiore) also makes an appearance and runs into David. Just as his agent Alex had done, she chastises him for becoming a Christian—adding that he could have made it big had he not. Indeed, the common theme that emerges is that David is largely condemned for becoming a man of God. That is, except for his friend Mack, who drinks too much and eventually starts to spin out of control.

Suddenly, a tragic event happens and someone dies. The law shows up in the form of grizzled cop, Detective Brewer (William Thomas Jones). Brewer believes that someone at the party caused the mysterious death and restricts many partygoers from leaving the mansion. While cooped up together, the people of interest (which includes all of the main characters) begin to bicker amongst themselves. But eventually, a powerful revelation prompts them to reconsider their perspectives and we gain insight into the film’s uplifting message (no spoilers).

“Live Fast, Die Young” is an entertaining film that has many correlations to our modern, everyday lives. It shows what people can do if they open themselves up to changing their outlook on life and spirituality.