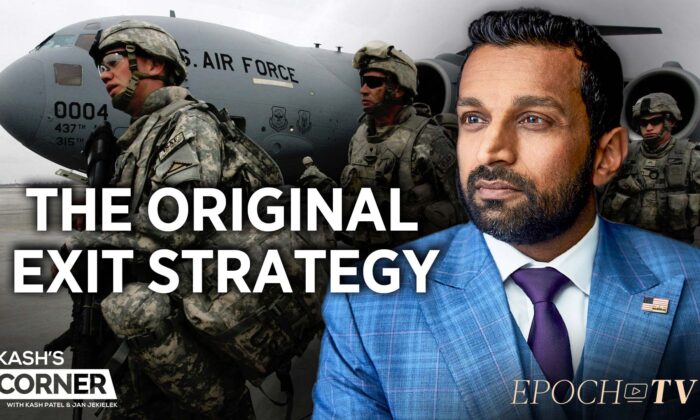 EpochTV Review: You Can’t Blame Trump for This

The Afghanistan withdrawal is worse than you think. Whatever level of incompetence you think was at play, however poorly you think the planning was, however avoidable you think this disaster should have been, it’s honestly so much worse. If you know anyone who thinks there was no way to pull out of Afghanistan without the country devolving into utter chaos, or if you know anyone who thinks Trump couldn’t have done any better, it is your duty to sit them down and make them watch the premiere of Season 2 of “Kash’s Corner.” I don’t care how you do it. Tie them to a chair. Tape their eyelids open. Offer them twenty bucks. Just make them watch “We Knew This Would Happen in Afghanistan and We Had a Strategy to Prevent It,” because they’re wrong.

Obviously it’s impossible to say with absolute certainty that the exit from Afghanistan would have gone better under former President Trump, because he isn’t the president and we don’t have access to alternate timelines. However, Kash Patel worked on Afghanistan under both the Obama and Trump administrations and the insight he provides into how those administrations tackled the problem of our longest war versus our current administration makes it difficult to believe Trump’s plan would have ended in such a catastrophe. The episode was clearly filmed before the worst day of the entire withdrawal, when 13 members of our armed forces—the bulk of them well under the age of 30—were killed by a suicide bomber, along with nearly 200 civilians.

The episode lasts just under 50 minutes, allowing Patel and Jekielek plenty of time to discuss in depth the steps President Trump had undertaken to ensure a successful withdrawal; the same steps President Biden completely ignored. Anyone not wholly consumed by Trump Derangement Syndrome likely knows that President Trump’s deal to withdraw was conditions- based, and that the Taliban knew full well that if they didn’t meet the conditions then the deal was off. Trump wanted to remove our troops sooner than the agreed-upon May 1st deadline, but had already delayed withdrawal once and was willing to do so again if necessary. He’d already proved to the Taliban that he wouldn’t pull our soldiers out on a fixed deadline if they weren’t holding up their end of the bargain, which was a strong incentive for them to do just that.

Patel’s explanation of the Trump administration’s handling of Afghanistan goes far beyond outlining the conditions and is infuriating. Trump ran on a platform that included ending the never-ending wars in the Middle East, with Afghanistan at the top of the list. However, he wanted to finally leave Afghanistan in such a way to hopefully allow for some modicum of peace between the Afghan government and the Taliban, which was the whole point of a conditions-based exit. The only way we were leaving was if both parties met these conditions, and since both the Taliban and Afghan government wanted us gone they were highly motivated to do so. The Taliban was required to renounce Al-Qaeda and come to the table with the Afghan government to negotiate an interim government, which they’d repeatedly done. We agreed to keep special forces in the country specifically to combat terrorism, and we made sure they knew we’d wipe anyone off the map who killed an American citizen or harmed an American interest.

Patel goes on to explain that Afghanistan was a high priority for President Trump in ways that it clearly hasn’t been for President Biden. Trump took daily briefings on conditions on the ground, listened to his military commanders, and was willing to pivot to a different strategy on a moment’s notice. The Biden administration took a completely different tactic, deciding that the intelligence focus should be on the white supremacy boogeyman within the Department of Defense. Rather than looking outward, U.S. intelligence agencies were looking inward, so when Biden finally got around to getting back to Afghanistan, months had passed since the last time anyone had paid much attention to what was happening on the ground.

The idea that there was no way to know the Afghan army would immediately collapse is one that Patel completely refutes, as the intelligence they were collecting (which the Biden administration was not) was very clear that if we did something like, oh say, leave in the middle of the night, the country would collapse. Based on the daily briefings, President Trump believed it would happen in a matter of days, leading to the plan to withdraw based on conditions. All of this intelligence that led Trump and his administration to this conclusion was and still is readily available for the new administration to look at any time they want, but clearly they didn’t want to or they wouldn’t have been shocked when Afghanistan collapsed over the course of a weekend.

Biden deciding that he wasn’t going to be held to Trump’s timeline also damaged our ability to leave Afghanistan in one piece. Patel makes a point that isn’t widely discussed about Biden moving the deadline and how the Taliban interpreted that as the United States breaking one of the conditions. Since the incoming administration immediately scrapped the withdrawal date everyone had agreed to, the Taliban no longer saw any reason to continue negotiating with the Afghan government in good faith. Perhaps we should have sent a strongly-worded letter that they’d better hold up their end of the bargain even though we had no intention to hold up ours. Then we might have avoided this whole thing.

Jekielek then asks about the media’s role in this whole debacle, marveling at the fact that suddenly the media remembered to do their job. Patel agrees that the shift in tone is quite drastic from their previously glowing coverage of Biden’s Afghanistan plan to covering the breakdown of the country honestly, which just goes to show how bad the situation is. If the media can’t find some way to ignore it, gloss over it, or interest the American public in what kind of pudding Biden had for dinner, you know it’s truly a disaster.

That’s a 500 foot overview of just the first half of the episode. Patel also talks about just how unconscionable it is that Biden’s DoD went into the withdrawal with no plan on how to get Americans and our allies out beyond giving them a phone number, the plans Trump had in place to actually extract the Americans who are now stuck, and how monumentally boneheaded it was to let go of Bagram Airfield. Trump even had a plan to get our weapons and machines out after the civilians but before the military—the exact opposite of what the Biden administration did. Every subject Patel and Jekielek touch on made this reviewer want to bang my head on a desk until the list of stupid, ego-filled, politically-driven decisions by the current administration stopped. But the list doesn’t stop for nearly an hour, and it never gets any better.

No matter what the media says, or how White House talking heads try to spin it, Patel makes it very clear that the Biden administration’s plan to withdraw from Afghanistan was very clearly, “Whatever Trump was going to do, we’re not going to do that,” and that’s it. That’s literally it. That’s why it’s so egregious that President Biden continues to throw out straw man arguments to deflect the public’s anger on this withdrawal, by suggesting that Americans are upset that we left, not how we left, or somehow insisting we either had to get out or send in more troops indefinitely. It’s also appalling that Biden continues to try to blame President Trump for his utter surrender to the Taliban, and that he thinks he can simply walk away from the press without taking questions or shame the public for being outraged about the way this war ended. Every American should see this episode and share this episode, especially with blind partisans who still somehow buy the lie that the blood spilled in the last week in Afghanistan isn’t solely on Biden’s hands. It is, and everyone needs to know it.