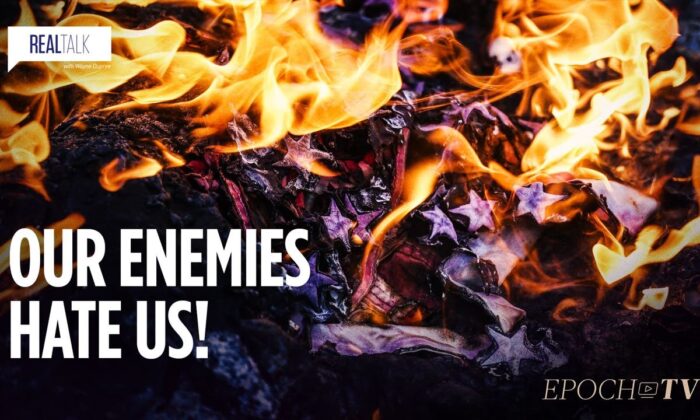 EpochTV Review: What Every American Needs to Understand About Our Enemies

The latest episode of “Real Talk with Wayne Dupree” entitled “Our Enemies Hate Us” addresses the recent events in Afghanistan and the motives behind the Taliban regime.

Dupree stresses something all Americans need to understand, which is that some people in this world hate the United States and everything this great nation stands for. The bombings in Kabul are tragic, and the worst part is not only that American lives were lost, but that it didn’t have to be this way. Terrorist organizations hate America and will do anything to destroy the West. At best, America’s so-called leaders are not accepting this reality. At worst, they are participating in it.

In the episode, Dupree shows clips from a CNN reporter interviewing an ISIS-K commander in Afghanistan. According to a Pentagon spokesman, the Taliban released thousands of ISIS-K fighters from prison shortly after coming to power. The ISIS-K commander explained that he used to fight with the Taliban but now he believes they have fallen under the influence of other foreign powers. His main grievance against the Taliban is that they have not proved to be strong enough in enforcing Sharia law punishments, such as stoning people or cutting off hands. “We only want to enforce Sharia. If anyone gets along with us on this, he is our brother. Otherwise we declare war with him.” When asked if he has carried out executions and bombings, the commander’s response was yes, saying that he has been present at many of these events.

Dupree talks about how suicide bombings are very effective because the desolation is typically great while the risk is very low. The bombers can easily adapt to different situations and if confronted with an obstacle, they can detonate the bomb earlier. However these bombers themselves are not the masterminds, they are simply delivery mechanisms. The terrorist leaders select the people who will be most likely to follow through with killing themselves and others. Dupree also differentiates between suicide bombers and homicide bombers, arguing that these terrorists should be labeled as homicide bombers because of the results of their actions on victims. It is also important to note that Muslims do not believe they are committing suicide as that is against their religion. Rather, terrorist groups see this practice as an act of combat, giving their life for the cause.

The terrorists who struck the Kabul airport wanted to murder as many Americans and their allies as possible, even while they were in the process of evacuating. Radical terrorist groups such as the Taliban or ISIS-K hate Western values and the prosperity that follows. This hatred motivates their every move. In this episode, Dupree suggests that the same disdain for American exceptionalism has infiltrated our own leaders.

To most Americans, the tragedy unfolding in Afghanistan reveals the incompetence of the current administration, as does the border crisis, or how the United States is destroying our energy independence. “This is not incompetence. This is intentional,” says Dupree. “It is the sole and expressed goal of this administration to make this country more like the rest of the world.” The Biden administration intends to accomplish this goal by laying waste to the heritage, values, and exceptionalism of the United States, all in the name of equity and making us more like other countries, including third world countries. Dupree also expresses his pain as a veteran to see how the Biden administration handled the deaths of the American military members in Afghanistan. “Our soldiers died and it seemed like our president shrugged his shoulders. Wake up America. These people hate us and our country.”

Showing an interview with a Taliban official stating the Taliban would not accept an extension of the August 31st withdrawal deadline or else it will provoke a reaction, Dupree talks about the core leadership issue that allows these groups to have their way. He says that our elected leaders in the United States are neglecting to govern with wisdom, courage, and conviction. Because of this, they become a product of a political ideology that disdains excellence and accepts mediocrity as a final step of progress. Instead of solving problems with rational and logical thinking, they ignore reality and common sense, and in turn create more problems. The constant political spin of deflecting their responsibilities and blaming others loses credibility, not only with Americans, but to the international community as well. Dupree also believes that the Liberal left will continue to repeat these mistakes because it is the pattern that their ideology operates within.

Dupree makes a case for why this ideology is so damaging by showing how the actions of the current administration work against the best interests of the United States and the American people. Leaving the security of a region to the very same terrorist regime that the United States has been fighting for the past 20 years is far from a good thing. Yet, very few appointed officials spoke out against the withdrawal. “There should have been a mass resignation within minutes of Biden telling them that he was evacuating troops and leaving Americans and allies behind,” says Dupree, suggesting that those responsible for this poorly planned and horribly executed mission need to publicly admit their failure to Americans and the world. Leaders must be held accountable for their shameful and disastrous actions. Dupree stresses that terrorists hate America, saying they are at the doorstep of our house, and we have the wrong people guarding the door.

As in all episodes of “Real Talk,” Dupree doesn’t just offer narratives, he also offers actions that each individual can take to help their country. The first solution he suggests is to pray, allowing God to handle the situation and deal with our leaders. He also says we need to help people wake up to this very real threat, because it’s not over. Our enemies will lie and connive and do anything to hurt the American way of life, both now and in the future. Dupree says Americans need to pray hard and strive to get our message through to others, while ultimately trusting that God is in control of the situation. “Don’t take back your prayer by worrying about it. Give it to God and let Him handle it.”