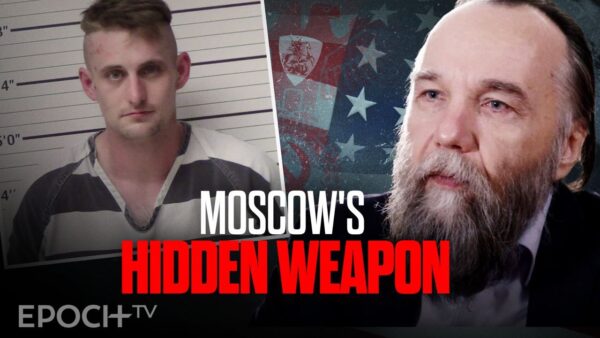 It’s really a travesty that the American legacy media is so dead set on carrying water for the Democratic Party, because they’ve been pushing the so-called Russia threat and scary white supremacist narratives. which have dominated the news since Donald Trump became the Republican presidential nominee in 2016. The problem is they’ve been looking at these stories from the angle of a bad orange man and the evil GOP—thus managing to miss the forest for the trees. It’s a good thing, then, that people like Trevor Loudon of “Counterpunch” have their fingers on the pulse of what is actually going on, and that alternative media like EpochTV is happy to have him devote entire episodes to the ways in which Russia and white supremacy are truly threatening to the West.

“Pro-Russian National Bolsheviks Spread Mayhem in the West” offers in less than 20 minutes a deeper dive into one of the many ways Russia is trying to influence American politics—more than anything CNN, MSNBC, or any of the big three news channels managed in four and a half years of peddling the idea that Trump was Putin’s puppet. Even those who seek out alternative media sources are likely to be more concerned about China’s communist influence than Russia’s, since Russia isn’t “technically” a communist country anymore. That isn’t to suggest Russia is a harmless teddy bear while China is a roaring dragon, but lately Russia’s been called out more often for hacking servers and interfering in military operations as opposed to actively disrupting our political system.

It’s our political system, however, which Loudon is most concerned about, and with good reason. While the National Bolshevik movement he discusses is admittedly a small one, it’s still very concerning and deserves to be highlighted and shared as it’s currently playing both sides of the political fence. The National Bolsheviks aren’t your garden variety communists or socialists, but a hybrid of communists and white supremacists. They’re closer to Nazis in the truest definition of the word when one considers that the Nazis were the National Socialist German Workers’ Party, onto which they tacked a rabid white supremacy. The left is hasty to insist Nazism wasn’t “really” socialist even though it’s right there in the name, and that’s understandable when progressives are working so hard to tar anyone even slightly to the right of them with the “white supremacist” brush. They don’t want to readily admit that many white supremacists are also openly socialists or communists who might have more in common with the peddlers of critical race theory than Trump supporters.

Loudon discusses several prominent members of this new breed of Nazi, whose ultimate goal is to essentially split the world into two parts. The northern hemispheres of Europe, Russia, and the West would be home to socialism rooted in white supremacy while the southern hemispheres would be left to those with darker skin. The founder of this movement is one Aleksandr Dugin, a former advisor to Putin’s intelligence chief Sergey Naryshkin, and a man very good at flying under the radar of the average American. Dugin still holds sway over Putin and wrote as far back as the 1990s about introducing racial animosity and separatism into American life, specifically to destabilize the United States’ political processes. The goal of this push is to “balkanize” the United States into separate factions both economically and ethnically that are at war with each other instead of any outside entity, thus weakening the entire country. Five years ago this may have sounded like a conspiracy theory, but anyone who has watched America’s blue states and red states grow farther and farther apart would be hard pressed to deny how close we seem to be towards a kind of national divorce.

Loudon loops back around to tie Dugan and his theories in with specific actors on both the national and international stage whose actions have been used to paint American conservatives with the white supremacist brush even though conservatism has nothing to do with white supremacy. Rather, modern day conservatism is focused on preserving the Constitution and the protections enshrined therein, which are antithetical to the concepts of communism. He discusses at some length Brenton Tarrant, the New Zealander who went on a rampage at two separate mosques in Christchurch, and his manifesto, which has been banned in New Zealand under laws usually reserved to ban pornography. According to Loudon, anyone in possession of his manifesto can actually be fined, something that feels like an extreme reaction until Loudon begins to discuss what the manifesto contains.

Anyone in the United States who remembers the Christchurch shootings will recall the speed with which it was blamed on right wing supremacists, a narrative that was dropped fairly quickly once this manifesto came to light, in which Tarrant blatantly stated he hated Donald Trump. The media then shifted simply to a discussion of gun violence and the need for stricter gun control laws in the United States (even though the attack didn’t happen here), which was the entire purpose of Tarrant using firearms in the first place rather than something like a homemade bomb. Indeed, Loudon posits that if New Zealanders had a right to bear arms the way Americans do, Tarrant may not have been successful in killing 41 civilians, or may have been forced to find another target.

Loudon moves from New Zealand back to the States and the infamous Unite the Right rally, which saw the left communist movement represented by the likes of Antifa clashing with this new Nazi socialist movement led by David Duke, Matt Heimbach, and Richard Spencer. Essentially, two pro-Russia groups—one white supremacist, one communist—came out to fight each other with normal conservatives caught in the middle and catching all of the blame. Matt Heimbach has stated his belief that Russia is the leader of the free world (not exactly in line with conservative thinking) and inexplicably, David Duke and Richard Spencer are still considered to be synonymous with the GOP, even though the GOP has done everything possible to disavow Duke short of carrying around a neon sign, while Spencer openly stated he voted for Joe Biden.

And speaking of Joe Biden, Putin has made no secret of the fact that he considers Biden easier to deal with than Trump, making it even more outlandish that conservatives are the ones who keep getting the blame for the white supremacist thugs infiltrating legitimate conservative movements. Again, the white supremacy movement in the United States isn’t large, despite what the current administration claims, but it is decidedly anti-American and pro-Russian. Loudon is an excellent, highly informed voice on this subject, and the subject of communism as a whole. As he urges at the end of the episode, “Pro-Russian National Bolsheviks Spread Mayhem in the West” should be shared far and wide. It is eye-opening, to say the least.