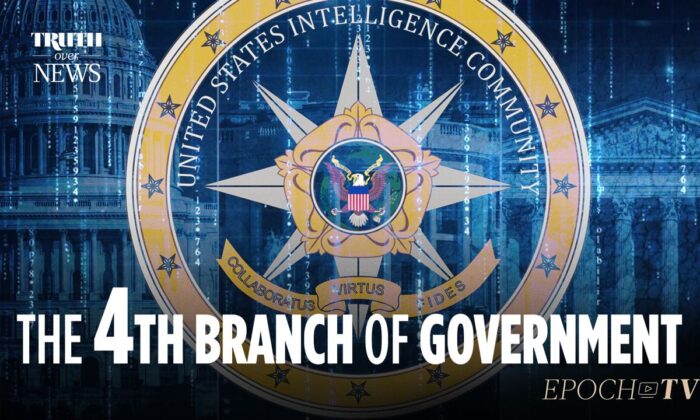 EpochTV Review: The Expansion of the Unelected Surveillance State and the Dangerous Power It Holds

In an insightful episode of “Truth Over News” entitled “Unelected Intelligence Community Bureaucrats Are in Charge and They Don’t Really Bother to Hide It,” Jeff Carlson and Hans Mahncke dive into the increasing power of the intelligence community and how it has stripped “We the People” of our say in this country.

Calling this group the fourth branch of government, the hosts explain how the role of the intelligence community has become more visible and prominent in recent years. These bureaucrats and agencies play a vital role in shaping both the news we see and how it is presented. They are able to do this both through the corporate media as well as social media platforms. This episode dives in depth and provides many examples of the efforts made by the intelligence community bureaucrats to undermine President Trump while he was in office, as well as interfere with election integrity during the 2020 election.

The hosts pose the question of what happens when Americans lose faith in the institutions that are supposed to hold our nation together? Eisenhower once warned of the military industrial complex, saying that we as a nation must guard against unwarranted influence from these agencies, speaking of the potential for misplaced power that they hold. The Trump presidency taught the nation that it is not the president who governs, but the unelected bureaucracy. The hosts say that what people often refer to as the deep state would be more properly called the post 911 national security bureaucracy.

This surveillance state has grown exponentially since 911. From 2001 to 2017, federal civilian employment grew by almost half million, with the majority of these new recruits being left leaning, politically correct conformists. From this group we have seen the concerning stories unfold, from corrupt FBI lawyers, to leaked phone calls engineering regime changes in the Ukraine, to the very ones behind the Russia collusion narrative. Many have risen through the ranks throughout the Bush and Obama presidencies, gaining enormous power. However, this power was not given to them by the people.

Unelected, progressive bureaucrats are in charge. The hosts assert that it was the desire of the biased intelligence community to get Clinton elected. The shock at her unexpected loss and the growing hatred for Trump led the intelligence community to expose their intentions and methods throughout his presidency. It seemed evident to more and more Americans that getting rid of a Trump presidency had turned into a full blown intelligence and agency mission. The FBI opened their entire investigation on a leading presidential candidate based solely on evidence that has been entirely discredited. That evidence came from an intelligence operative who was hired by the opposing campaign—and that’s just part of what we know, not to mention what we don’t know.

Then the CCP virus pandemic started. But even in the midst of this, the lab leak theory proved that it could possibly be a winning campaign issue for Trump. After all, who else but Trump could take on China and make them pay for what they had done? The story had to be killed off and the intelligence community was there to do the dirty work. As soon as the administration suggested the virus might have come out of the Wuhan lab, the intelligence community issued a statement saying it likely came from natural origins, which has later been proven unlikely. To make matters worse, the intelligence community’s sources were the very scientists who had spent more than a decade collaborating and funding the Wuhan lab. This information trail shows that Trump’s own advisors were feeding him false information and circumventing his efforts.

Then there was Hunter Biden, with a laptop of incriminating evidence not just to Hunter Biden, but also to presidential candidate Joe Biden. Shortly after the scandal erupted, more than 54 intelligence officers signed a letter claiming that the laptop story was simply a Russian disinformation operation. The FBI had the laptop in its possession and knew it was real, but they and the Department of Justice remained eerily silent. After the election, it came out that Hunter Biden indeed was under legitimate investigation. However this truth was too late. The damage by the lies and cover ups of the media had already been done to the public and the desired mission accomplished.

The hosts explain that the goal of the surveillance state is to increase their size and power. To achieve this, they have created a media-inflated narrative surrounding the supposed threat of domestic terrorism, similar to what was done with foreign terrorism after 911. The unfolding information surrounding the Jan. 6 Capitol riots raises questions about how much the intelligence community knew in advance and how much they may have even aided the unfortunate event in taking place. The expansion of the intelligence community is not hidden anymore. These institutions gained tremendous power in the wake of 911 and they are hungry and eager for more. They tried to depose a president who threatened them—and who they couldn’t control. But, one question remains: When we lose faith in the institutions that were designed to protect our country from such an effort, what value do these institutions possess?

“Truth Over News” premiers every Tues & Thur at 5 p.m.—exclusive on EpochTV.