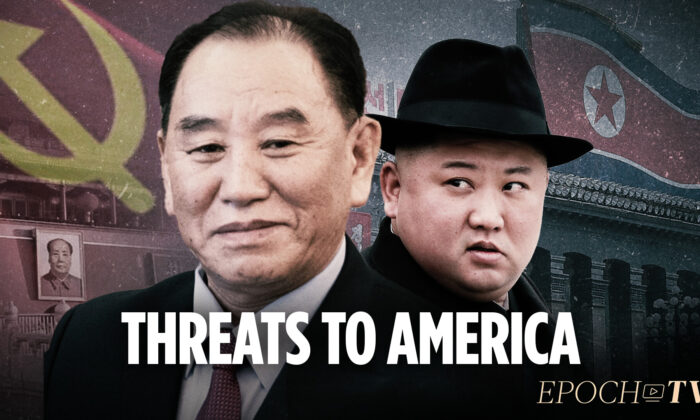 Epoch TV Review: The Enemy Within

Sometimes, I have to tip my hat to the legacy media. They’re liars and cheats, but they’re effective little buggers when it comes to the ol’ sleight of hand. Even with public trust in newspapers and television news at all time lows, they’re still very good at going, “Look over there!” and keeping much of the country distracted from what’s actually very important. While a growing number of people may realize the media isn’t telling them the whole truth, most of them still have no idea just how badly they are being misdirected.

We all know multiple countries are a huge threat to the United States on the world stage, or at least, we should, except for that ol’ sleight of hand. To date the legacy media has been very good at keeping everyone occupied with the COVID-19 debacle, driving up terror about the Delta variant, and splitting the country over a new kind of pro-choice/anti-choice movement. People are sick to death of hearing about this, but in their irritation they’re demanding the news tell them about other domestic problems: inflation, the economy, the southern border, skyrocketing crime in our cities—just to name a few. How much time does that leave anyone to think about the serious threats beyond our borders? Is anyone thinking about them?

The answer to that is yes: Trevor Loudon, the host of “Counterpunch,” is thinking about them. He says at the opening of the August 18th episode that it will be one of the scariest episodes he’s ever done, and boy is he not kidding. “Security Risks Inside the Armed Services Committee?” feels especially timely given the spectacular collapse of Afghanistan and the power vacuum created in that country by our completely botched exit. All week, media pundits, opinion hosts, and nightly news anchors have been trying to figure out what President Biden was thinking before creating this horrific mess. To be fair, he may not be thinking anything at all, since no serious person honestly believes he’s the one running this show. Whoever is running the show certainly hasn’t been thinking about how to get our citizens out of Kabul, and that’s why this episode is so frightening.

Loudon spends the episode identifying members of the House Armed Services Committee (HASC) who might be a little too comfortable with authoritarian regimes in general and communist regimes in particular, and not entirely loyal to the government that signs their checks. It’s all very hush-hush, the kind of thing that gets dismissed outright as conspiracy theory, except Loudon brings the receipts. I mean, we did just abandon billions of dollars in high tech military equipment in a country rich in untapped natural resources while cutting off the Taliban’s finances. It’s not that far-fetched to think that China, for instance, might be happy to fulfill the Taliban’s monetary needs by picking up some of our equipment at bargain-basement prices, or purchase mining and drilling rights to get at all that petroleum and natural gas, not to mention the minerals and metals. After watching “Security Risks Inside the Armed Services Committee?” it might not seem so far-fetched either that our humiliating withdrawal from Afghanistan might not have been merely a case of poor leadership, but compromised leadership.

Loudon opens the episode with a brief recap of all the threats coming out of Korea, China, Russia, and Iran. Though these countries have spent a long time talking tough, they’ve definitely been upping the ante since Biden took office, recognizing he is fundamentally weak. Say what you want about Donald Trump—that his way of speaking wasn’t exactly polished, that he could come across as brash at times, that his behavior was all just overcompensating for his small hands—but you cannot say he was weak. Our friends and our enemies knew exactly where they stood with him.

Instead we have someone who definitely isn’t named Joe Biden making military decisions that are genuinely endangering our country and our citizens. In reality, we probably have a lot of someones making military decisions that might not be in the United States’ best interests, which is the whole point of this episode. Loudon peels back the lid on the HASC just so we can watch the roaches scatter. If you’re not familiar with the HASC, I’ll let Wikipedia explain what they do in one of their few unbiased political entries:

“The Armed Services Committee has jurisdiction over defense policy generally, ongoing military operations, the organization and reform of the Department of Defense and Department of Energy, counter-drug programs, acquisition and industrial base policy, technology transfer and export controls, joint interoperability, the Cooperative Threat Reduction program, Department of Energy nonproliferation programs, and detainee affairs and policy.”

So it’s kind of an important committee, and you don’t have to do anything other than get elected to Congress and schmooze the right people to end up on it. That is to say, you don’t have to pass any kind of background check to sit on this committee, or have any special security clearance, or have anyone look into your potentially problematic associations so long as you know how to play the political game. Loudon looks at a number of members of this committee whose list of friends and acquaintances is disconcerting, to say the very least, and who could definitely not pass a background check.

Loudon targets five Democratic members of this committee with highly questionable ties: Joe Courtney (Conn.), Marc Veasey (Texas), Seth Moulton (Mass.), Rick Larsen (Wash.), and Ro Khanna (Calif.). He outlines each in turn, giving insight into their backgrounds, their connections, and whose influence they might be under. Two are aligned with the Alliance for Retired Americans, which is not as sweet and innocent as it sounds (Courtney and Veasey), another two were endorsed by the National Iranian American Committee (Moulton and Khanna), and the last (Larsen) is a leader of the U.S.-China Working Group, which lobbies for China for increased trade between our countries, increased access to our markets, and increased flow of information between the United States and China. Even Eric Swalwell (D-Calif.) gets a mention. As a reminder, sleeping with a Chinese spy wasn’t enough to get Swalwell booted from the Intelligence Committee despite being a clear example of his obvious lack of intelligence, so it’s not much of a surprise that these members of Congress ended up on a very important committee without anyone ever checking into their backgrounds, or worse, checking into their background and going, “Meh.” And that’s really just the tip of a very large iceberg.

The connections these five men have, as expertly outlined by Loudon, are tied to China, North Korea, Iran, Russia, and Venezuela. These ties run deep, with many having friends and acquaintances who are longstanding members of the Communist Party (loyal to China) and the Democratic Socialists of America (really just communism-lite). Mercifully, Loudon stops at only five representatives, though after the long, long list of associates and their affiliations you might feel like throwing up. That feeling doesn’t go away when he shifts the conversation back to just how long our military has been undermined by enemies more domestic than foreign. As he succinctly points out, we’ve been dealing with this betrayal by our government since the end of World War II. We could have easily won Korea if we weren’t undermined from within. We should have handily wiped the floor with the Vietnamese but forces within our borders didn’t want us to win. We just spent 20 years and over a trillion dollars in Afghanistan, only to watch it fall apart in a little over a week. Are you worried about this pattern yet?

It really is imperative, at this moment in history, to share this episode everywhere you can. As Loudon points out, this may all be absolute coincidence, and I’m not in any way suggesting the representatives in this episode are foreign actors or calling the shots, but given how damaged our image is on the world’s stage right now, should we really just blindly trust our elected officials without even looking into it when we find they have problematic ties? Shouldn’t we at least ask some questions about it, especially if they sit on powerful committees that deal directly with our military? Loudon thinks so. I do, too.

Counterpunch premiers every Wednesday at 7 p.m.—exclusive on EpochTV.