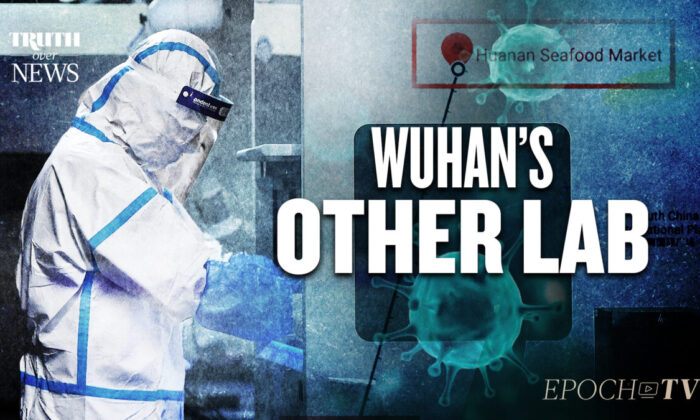 EpochTV Review: Something is Rotten in Wuhan

With the recent release of Congress’ official inquiry into the origins of SARS-CoV-2 and the half-expected declaration that the virus was equally as likely to have natural origins as man-made origins, it seems increasingly certain that we’ll never know where COVID-19 actually came from. Not only have scientists still not found the “missing link” animal that allowed the virus to jump from bats to humans, presuming it has a natural origin, but there are two separate labs in Wuhan, China, that deal with bat coronaviruses, and neither of them are talking. It sadly isn’t surprising that Congress couldn’t get any straight answers on this issue after waiting over a year to start asking questions, and were thus left to put out another report whose findings amounted to, “Oh well.”

While the Wuhan Institute of Virology has long been the chief suspect in the lab leak theory, there is a second lab located in Wuhan that has a lower biosafety level and seems to have been quietly swept off the list of suspects between the time Trump first mentioned the potential lab leak and a few months ago, when our media overlords finally decided we’re allowed to talk about it. Thankfully, “Truth Over News” hosts Jeff Carlson and Hans Mahncke not only remember this second lab, they have devoted an entire episode to it so you’ll remember it, too. “There’s Another Lab in Wuhan That’s Received Far Less Attention: The CCP’s Lab” deals primarily with the main players at this second lab, but also shows its ties with the Wuhan Institute of Virology. The main takeaway from the episode is that anyone who believes China will ever tell us anything about the origins of COVID-19 is, at best, a fool.

Carlson starts off introducing the viewer to the Chinese Center for Disease Control and Prevention Lab and its own bat enthusiast, Tian Junhua, who was in charge of studying coronaviruses. After giving a teaser about the lab’s proximity to the Huanan Seafood Market that took initial blame for the COVID-19 outbreak, Carlson drops an early bombshell about the date the lab opened, which is enough in itself to hook the audience into instantly wanting to know more. Mahncke picks it up from there and doesn’t disappoint, diving into Junhua’s background with the Chinese CDC and studying bats in particular with a starting timeline of 2012 and stomach turning details. The year 2012 may seem innocent at first, but it comes back into play later in the episode so keep it in mind as you watch.

Despite knowing very little about bats, Junhua trapped them for research with seemingly great enthusiasm. In addition to providing the viewer with his analysis, Mahncke also shows the referenced media story on Junhua so any interested audience member can pause and read for themselves exactly how reckless he was when collecting his specimens.

After revealing the stunning carelessness Junhua employed in capturing bats, Mahncke begins to connect him to other dots in the coronavirus pandemic. Junhua is not just an arbitrary scientist with no regard for safety protocols plucked from a list to support the idea that COVID-19 may have leaked from the Chinese CDC lab. He’s an accredited scientist and an internationally published author, who has written at minimum three papers in conjunction with, among other people, virologist Edward C. Holmes. Holmes was on the teleconference with Anthony Fauci in February 2020 that no one was ever supposed to find out about, where the initial plan to bury the idea that the virus originated in a lab was hatched.

As if this wasn’t enough to raise alarm bells about Junhua and the Chinese CDC lab, Carlson presents an article from a whistleblower in 2018 that outlined not only the deplorable conditions in the level-2 biohazard lab, but how many bats were still in captivity for research purposes. It will come as a surprise to no one that the article quickly vanished from the internet and the whistleblower vanished as well. Carlson then moves on to the date the lab was moved into close proximity to both the wet market and Union Hospital, which both saw COVID-19 outbreaks in the earliest days of the pandemic. Little is known about when or why the lab was moved, but Peter Ben Embarek, lead investigator for the WHO into the origins of COVID-19, was concerned enough about the lab’s recent move to speak with Danish documentary filmmakers about it.

Mahncke picks up Embarek’s trail from there, noting that he joined the “it wasn’t a lab leak” chorus in February 2020, and that his Chinese equivalents were just lovely, helpful people who never stonewalled him or tried to twist his arm into keeping his mouth shut. Again, what he said behind closed doors told the opposite story, even as he continued with the accepted natural origins narrative. Embarek even appears to have fudged the timeline with the WHO of the first coronavirus case happening in mid December 2020.

Holmes and Junhua come back into play as Carlson returns to fill in more of the timeline of the effort to squelch the lab leak theory. They published a joint paper in February 2020 to establish Dec. 26, 2019 as the official date of the first coronavirus case. In what feels a little too much like a planned coincidence, the head of the Wuhan Institute of Virology, Shi Zhengli, published a paper on the exact same day claiming she just happened to stumble across a bat virus that was similar in genetic structure to SARS-CoV-2. Zhengli tried to hide the fact that the virus came from samples taken in 2012 (the same year Junhua started working for the Chinese CDC lab) and had managed to kill three miners working where the bats lived.

It’s at least worth asking more pointed questions, which is exactly what Carlson and Mahncke do at the end of the episode. They don’t accuse anyone of a specific cover-up, but rightly point out that there are enough red flags not to just leave this at, “We can’t be sure what happened.” Given the evidence laid out in “There’s Another Lab in Wuhan That’s Received Far Less Attention: The CCP’s Lab,” not wanting to ask questions feels more like a conspiracy theory at this point than speculating about a lab leak. The straightforward, no-nonsense reporting in this episode of “Truth Over News” is more than worthy of watching and sharing, and may finally help put to rest the ridiculous idea that anyone worried about the two labs in Wuhan is just xenophobic.

“Truth Over News” premiers every Tues & Thur at 5 p.m.—exclusive on EpochTV.