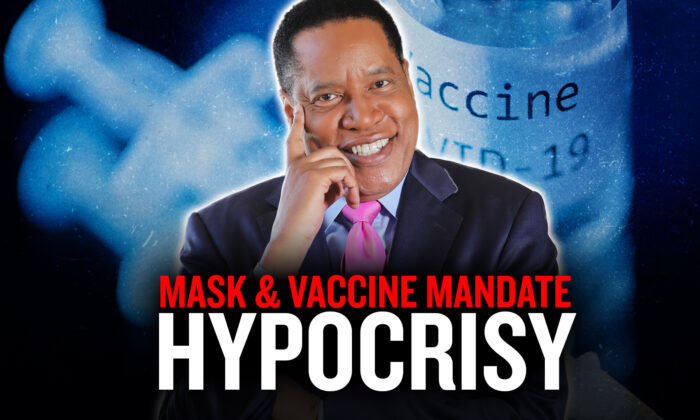 EpochTV Review: No, Really—They Said This

There are many reasons that I love Larry Elder, not the least of which are his stunning smile and mental Rolodex of data, history, and statistics to back up his beliefs and assertions. He’s succinct, ideologically consistent, highly educated, has a tremendous backstory, and is a small “l” libertarian. He managed to red-pill Dave Rubin and stole him away from “The Young Turks,” for which they are endlessly bitter, and he wisely hasn’t voted for a Democrat since Jimmy Carter. He’s also currently the leading Republican gubernatorial candidate to challenge Gavin Newsom if Californians are smart enough to check “Yes” that they want him recalled. I hope with all my heart Elder succeeds in his campaign, as I’m not sure how much longer the Golden State will hold on with people like Newsom at the helm. “Democrats’ Hypocrisy on Vaccine Mandates” isn’t likely to ingratiate him to anyone desperately trying to convince California voters that the recall effort is some kind of vast right-wing conspiracy, but those folks are a lost cause anyway.

For this episode of “Larry Elder with Epoch Times,” he employs something else I love: the video montage. I love video montages in general and of the media and Democrats blatantly contradicting themselves in particular. They fill my soul with glee and give me endless fits of giggles. I giggled my way through nearly the entire 16-ish minute running time of this episode, because few things are sweeter than being able to look someone square in the eye and ask, “Oh, you didn’t say that? Roll the film.” It’s even better when the montage highlights how members of the mainstream media were in some cases literally reading from the same script in spinning the narrative for public consumption. The left thinks only Sinclair Broadcast Group stations do that. It’s wonderful proving them wrong.

This episode also tackles two things that I loathe, and they’re right there in the title. I can’t stand hypocrisy and I’ve had it up to here with talk of vaccine mandates. To be clear when we’re talking about hypocrisy, there is a huge difference between changing your mind as you’re given more information on a topic and saying one thing then doing another. There is also a difference between acknowledging that yes, I said this in the past but my views have evolved, and acting as if you never said the thing in the first place. The former shows personal growth, while the latter is little more than gaslighting.

As for the vaccine mandates, I’m so sick of hearing about it I’m probably getting an ulcer. The vaccine was supposed to get us back to normal. It was supposed to be our way out of the masks and the lockdowns so that life could return to something pre-COVID-like. Only not enough people have taken the vaccine to reach herd immunity, the Delta variant popped up out of India, we’re probably going to need yearly booster shots, and the media has had enough time to so badly terrorize half of the population about dying from a largely survivable disease that we’re quickly frog marching towards fascism. It’s bad enough forcing the population to wear a specific piece of clothing, but that’s at least relatively benign. Insisting that everyone submit to a medical procedure (that’s what vaccinations are, even if you can get them at Walgreens) and then demanding everyone provide proof to anyone who asks—businesses, governments, police—that their vaccination “papers” are in order is tyranny and a violation of medical privacy rights that’s so audacious it makes my blood boil.

And this is all why Elder’s latest episode is simply fantastic. He spends very little time on commentary, but instead provides content to let the pundits and politicians speak for themselves. As much as I love listening to Elder talk and debate, this is an extremely effective method in our current political climate for pointing out exactly why the COVID-19 vaccination rates have plateaued. Democrats at all levels of government are fond of blaming Republicans and their constituents, even though Trump is the one who pushed for the vaccine and Republican governors nationwide have been vocal about recommending their citizens get vaccinated. What the Democrats really have a problem with is Republicans leaving it up to the individual to make a choice, since they can’t stand individuals, so the smear campaign became a necessity no matter how ridiculously untrue it is.

Elder starts us right off with a more likely reason people aren’t running out to get the jab anymore. His first montage is two straight minutes of CNN, MSNBC, CNN, and CBS anchors, opinion hosts, and guests saying over and over and over again that Trump trying to rush a vaccine went against science. It was dangerous. Trump’s motives were suspect. It was politicized. Politicized science gives us unsafe results. Anchors continually cast doubt on whether a vaccine developed in under a year would be efficacious or okay to inject into your body. Every single one of these news organizations leans left (though only MSNBC admits it), yet somehow it’s the people watching Fox News that are causing the vaccination rates to remain well below herd immunity.

Once you’re done either chuckling or rolling your eyes at the first montage, Elder launches into the next one; this time of various politicians in the early days of the pandemic telling everyone who would have them on camera that it was all fine, there was nothing to panic about, it was just a cold or flu, go about your daily lives, it doesn’t even spread. The clips are all shortly after Trump put in the travel ban on mainland China, which was decried throughout the entire month of February as unnecessary and xenophobic, and has the Democrat hypocrisy on full display. It’s deeply ironic how many times Bill De Blasio appears to tell New Yorkers not to panic, given New York City’s recently passed vaccine passport mandate that doesn’t even offer medical exemptions for people who can’t be vaccinated due to an underlying condition. He’s not the only politician from a city to put in one of these mandates who makes the cut, either. There are also politicians from New Orleans and Nancy Pelosi’s (D-Calif.) infamous San Francisco Chinatown trip. Both cities have also passed vaccine passport mandates.

Our host shows clips of the Vice President and others, then from there segues into Ron Johnson (R-Wis.) discussing what has been a personal gripe of mine through this whole mess—the fact that we went straight to a vaccine and still aren’t trying to find effective therapies that might knock COVID down to little more than a cold in the early stages of the illness.

Elder moves on to the border and the number of illegal immigrants who have been pouring into the country, largely unvaccinated. There’s also a clip of Ron De Santis, a governor Florida is lucky to have even if the people in the cities don’t realize it. Elder stops there, having given the audience more than enough evidence to shatter the idea that people aren’t getting vaccinated because of something Republicans or Fox News are doing. It might not be because of any of the clips he shows either, as the decision to take the vaccine or not is a personal one that is made for personal reasons.