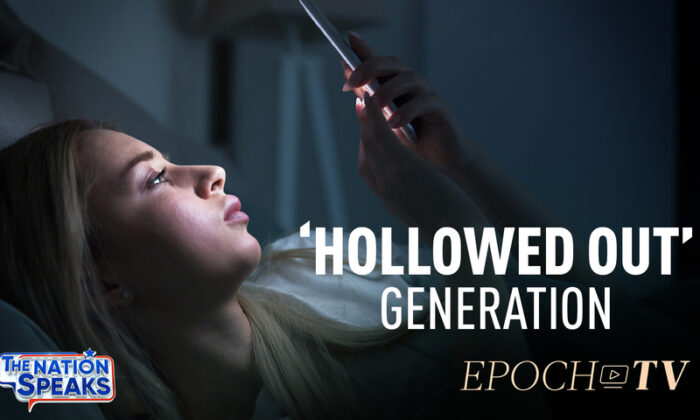 EpochTV Review: Is Your Child Addicted to Their Phone?

Every generation worries about the upcoming youth, but does the age of smartphones and digital addiction pose a more serious threat than ever before? In an episode of NTD’s “The Nation Speaks,” host Cindy Drukier interviews teacher and author Jeremy Adams, as well as psychologist Hilarie Cash, to answer this question.

It has only been 14 years since we’ve had computers in our pockets that are available every moment of our lives. In his book “Hallowed Out: A Warning about America’s Next Generation,” Jeremy Adams, a civics teacher of 24 years, brings awareness to what he is seeing in the classroom and how he believes the younger generation is negatively affected by technology.

Adams says when you work in the classroom, you get to know kids and you notice if there are troubling trends. He believes the most disturbing thing about kids today is the value system they are embracing. The way they look at their country, the way they spend their time, and the values they hold are not helping them live purposeful and meaningful lives. In fact, they are hindering them.

Being a civics teacher, Adams says he worries about the American experiment.

“America is not like other countries. We can’t have a single lost generation that doesn’t understand what it means to be an American and what those values are and how you perpetuate the American experiment,” he says.

He is worried about the values that have emerged in young people over the past 10 years. These include the extent to which young Americans live their lives completely untethered to adult values, influences, or role models.

Adams says that although it doesn’t matter to him whether the youth are religious or not, he is bothered that young people don’t seem to know anything about religion.

Other troubling trends are that the younger generation is extremely unpatriotic, they don’t have the desire for relationships, marriage, or family, and they are radically individualistic.

He says that when you think about the things that make life enchanting and grand, you think of friendships, love, learning, and going out and seeing and doing things. Yet today’s youth are lonely and isolated.

He was worried about these things prior to the COVID-19 pandemic, but now these problems have been amplified and accelerated.

Kids today don’t go out and socialize, they don’t have meals with their parents, and they often spend 9 to 10 hours a day on their phone.

Adams says kids post-COVID-19 are zombies in the classroom and don’t know how to engage in academic and social environments.

Adams believes the reason for much of this falls on the adult generation. He says that we have given young people freedom but haven’t stepped forward and given them the values, knowledge, or insight needed to use that freedom well. If adults give youth the freedom to do whatever they want, we have to also teach them that freedom allows them to commit to what is important and meaningful. When we fail to do that, we are left with a generation that sees freedom as tantamount to indulgence or licentiousness, and doesn’t connect it to important things.

Being a parent, spouse, teacher, or person of faith, is hard. It may be the hardest thing a person does, but it will also likely be the most meaningful. Youth today often aren’t able to make the connection between struggle and purpose.

Acknowledging that high expectations usually come from adults, Adams points out that the parent generation, in our zeal to be compassionate and empathetic, have actually let our youth down. Being kind is a good thing, but it should help students feel secure so they can achieve good things.

Now in schools, teachers are also friends, counselors, and often act as parents to their students.

Teachers today need to understand that compassion and empathy should serve youth in a way that prepares them to show up, study, work hard, and have success. Adams says many teachers think they’re being compassionate by giving students a diploma without making them learn anything.

Any form of success requires diligence, knowledge, and skill. Robbing young people of what they need to stand tall in the world and achieve what they want in their lives is not kind.

Thankfully, Adams does believe there is still time to turn the situation around. He says we all want to do better. Young people know they are addicted to their phones and need to live life more. The adults know better and know they need to do things like insist on family time, church, and community. He says parents and teachers need to start “adulting” again, which means putting ourselves in the physical, intellectual, and moral spaces of young people. Awareness is the key to breaking the phone addiction, because once we are aware, we can intervene.

To learn more about how bad the digital addiction in our youth is and what can be done about it, Drukier interviews psychologist Hilarie Cash, co-founder of reSTART: Internet Addiction Recovery Program.

Cash, who has been seeing addicted patients for over 25 years, says the addiction problem has been growing steadily as technology has entered everyone’s lives. The software is designed to be addictive, and kids are now exposed to technology from early ages, which affects their development.

Cash says there are tell-tale signs if there is an addiction problem. One of the disorders is called “Gaming Disorder,” which often happens to people who become addicted to video games. It can be recognized when gaming begins to take over a person’s life: they no longer have control over how much they use it, they lose interest in other things, and they continue with their behavior despite negative consequences.

Cash says that grades going down, not getting enough sleep or exercise, not having many friends or offline activities, or fighting with family about technology-use rules, are all indicators that there is a problem.

Cash says technology affects brain development in young children. Today, many parents are handing devices to their babies, which has never been the case in past generations. This impacts social development substantially, because a person doesn’t develop good social skills unless they are actually interacting socially with other people.

Cash also explains the attachment issues that result from being exposed to too much technology. A child needs to be attached to their caregivers, but if the caregivers are on their devices too much, or putting the kids on devices to keep them distracted, this affects the attachment a child develops with their caregiver, which in turn affects mental health later on down the road.

She says that from ages 13 to 20, many have intimacy disorders, not having the skills and confidence to initiate, develop, and maintain emotionally intimate relationships.

Sexuality is also impacted because there is a blending of activities online, with many users looking at pornography, gambling, gaming, and social media all at the same time.

On top of this, there are physical problems, such as sleep deprivation, inadequate exercise, and poor diet.

In regards to social development, there is a lack of skill in communication, as well as attention problems.

Technology gives us immediate gratification, which negatively affects academic work by not having the ability to stay focused, persevere to get projects done, and look forward to getting a good grade.

So what can we do? Cash says there are apps that help at least monitor phone use, and these can be helpful if a person is actually motivated to make changes.

She recommends that parents don’t give smartphones to their children before high school. The software parents can put on phones to monitor kids is easy for smart kids to get around. She says to make sure kids don’t have smartphones until they have developed a well-rounded life and can sustain that once they get a smartphone.

Cash also says it is wise to have boundaries around phone and screen time, such as checking your phone at certain times and otherwise leaving it off, and making sure times at home are intentional and not surrounded by screen time and devices. Make sure kids are getting time outdoors, exercising, doing their chores, having down time, and in-person social time.

Cash says the key is to focus on giving your kids the proper rules and guidance so they can live a well-rounded life.

“The Nation Speaks” premiers every Saturday—exclusive on EpochTV.