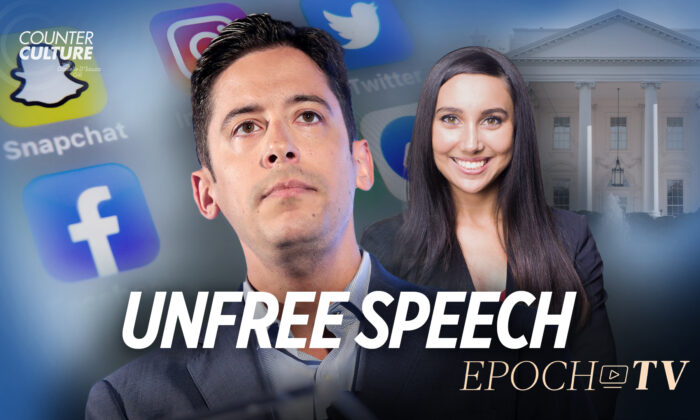 EpochTV Review: How Americans Can Wield Their Rights to Fight Censorship and Bring Down Big Tech

The latest episode of “Counterculture” with Danielle D’Souza Gill entitled “Unfree Speech” dives into the current state of censorship in America, the disturbing leftist ideologies behind it, and how Americans can fight back. It’s no secret that Democrats have been having a hay day with censorship for quite some time now, and many now wonder if free speech is completely lost. This is unsettling for Conservatives because it’s not what they do as a political party. They like listening, learning, and fostering debate and open discussion.

Conservatives aren’t triggered every time someone disagrees with them. They can rationally disagree with others because they focus on facts over emotions. However, it’s not enough for Democrats to disagree, they need others to celebrate their beliefs and give them full and unrestricted power. In social circles, leftists will silence, mute or isolate those they disagree with. In larger contexts, Democrats are purely hypocritical. This is portrayed by Senator Elizabeth Warren believing a baker should be forced to bake a cake that violates his religious convictions while also believing that Facebook should be able to censor and shut down any beliefs it doesn’t align with.

The most troubling censorship issue of late is the unfolding relationship between big corporations and the Democratic Party. While Conservatives support the little guy, Democrats repeatedly prove their allegiance to big corporations that censor individuals. The left is for whatever benefits them and they are willing to use other people as a means to that end. As long as the left can provide a reason for censoring speech, they think it’s ok. From censoring average Americans, to silencing the president of the United States, Democrats have proven that they don’t care about diversity of opinions, they only care about censoring and destroying opposing beliefs.

The larger question is why the left is partnering with corporations that are free from constitutional restraints and requirements? The Democratic Party doesn’t limit their avenues of control to just politics, they see the opportunity for power in the private sector as well. A perfect example of this is Jen Psaki saying that she doesn’t believe the government should mandate vaccines, but she hopes private companies will do so. The administration doesn’t want to take the heat from imposing a federal mandate that will hurt their political power in upcoming elections, yet they are supporting this freedom stripping mandate happening in private companies.

The left says the first amendment doesn’t apply to private businesses, but when these companies are being run by a government agenda, what can Americans do? Despite the oppression and silencing of opposing views, what the Democrats agenda hasn’t succeeded in, is changing the minds and values of Americans. If anything, this censorship has made people more aware of how tyrannical the left really is and how Conservatives are in fact the party of openness, tolerance, and freedom. The recent blatant attacks on constitutional freedom has only made more and more people disgusted with the left.

In this episode, Danielle D’Souza Gill interviews guest and conservative commentator Michael Knowles, author of “Speechless: Controlling Words, Controlling Minds.” Knowles talks about how the spoken word is crucial to the pursuit of truth. We often think of free speech as one political issue, but it’s not just one issue. “Speech gets to the heart of the whole political order,” says Knowles. Because humans have speech and can communicate in a way that is rational, we can come together, exchange ideas, and decide how we want to operate as a society. If someone can control speech, whether through the tyrannical means of censorship or the more passive ways of political correctness, they can exert control over the entire political order. This is exactly what the left has been attempting to do.

Speech is a defining characteristic of being human and being able to communicate. It is a means to an end. Words are symbols that people use to make sense of reality. However, in recent years the political left began to adopt the idea that words don’t communicate about reality, instead, they actually create it. They believe that the words we use construct the reality we live in, like when we call a man a woman. If we call a man a woman, he will actually become a woman. “In that ideology, when you believe that by redefining the words you can redefine reality, then language control becomes the most important political tool at your disposal,” Knowles says.

Language colors the way we view the world and offers different perspectives. At times, we all try to be polite and soften reality, but the left uses language to distort and change reality. This is seen when the left calls criminals “justice involved people” even though criminals are actually involved in injustice; or calling illegal aliens “undocumented Americans” changing the perceived rights associated with the two different labels. Knowles believes that the manipulation of language has totally upended our culture.

The episode dives into the issue of pronouns and how Democrats have recently placed a strong emphasis on this. Knowles advocates for using the correct pronouns and acknowledging the truth of reality, even if it is considered rude or cruel. One of the worst ideas that the left has gotten people to embrace is that the truth is cruel and lies will set them free. That is the opposite of the actual truth and what we as a culture have previously understood, which is that lies are cruel and disrespectful. Reality has the right to define our existence and we have a responsibility to adhere to that over leftist political activists.

When asked how Americans can be empowered to speak truth and stick with facts despite cultural bullying, Knowles says that love is tough at times. People have to be willing to stand up and speak hard truths. There is such a thing as virtue, even though the left has demonized it and says that we can’t distinguish right from wrong. Courage is a virtue, and it is a prerequisite for all other virtues. Oftentimes, people would rather lose the real fight if it means they can preserve a false dignity, but that’s not courage. Americans have to be able to do what is right and risk certain losses, in order to stand for anything good in this world.

Knowles says the communications industries such as the news media, Hollywood, and publishing are at the front lines of this new mind control, putting ideas into our heads that we aren’t even aware of. He likens Americans to a fish in water. The fish doesn’t know it’s in water until the water is taken away. Americans need to question the premises of all the ideas they are living with. They shouldn’t engage in the proposed narratives of the left and allow Democrat agendas to define the conversation.

In regards to social media, which has heavily censored topics such as COVID-19 and the 2020 election, Knowles says Conservatives need to wield the power of the state to bring big tech oligarchies into line. He believes these monopolies have far too much power, citing that if one group is able to deprive the president of his right to speak in a republic, then they have completely outsized political control. The people of this country have the right to exert their own political authority against big tech. The left understands free speech and censorship—they understand that it has to do with more than just rights, but rather, it has to do with standards. The battle of competing ideas is not simply about what is right and wrong or true and false, but about standards that they believe society will support.

These monopolies control speech, spy on citizens, and compel behavior with subtle conditioning. Because big tech is everywhere, the imbalance of power is great. What is worse, these companies are not purely private entities. A simple money trail will link certain functions of big tech companies with government branches and politicians. Knowles suggests removing big tech’s legal protections given to them in the 1990’s, and going after them from the angle of antitrust and fraud. He notes this would require help from the Department of Justice, which won’t happen under the Biden administration, leaving Americans with the strategy of winning elected office in order to infiltrate and manipulate the bureaucracy and bring these companies to justice.

Knowles also reminds listeners that Americans need to be willing to engage in substantive arguments, not just procedural arguments. Americans can come to a consensus by looking toward the tradition of free speech as it has actually existed in American history. There has never been an understanding that pornography, sedition, or fraud is protected by the American Constitution. Laws have been made throughout history to protect the country from many of these things. He says that Americans can look to prudence and what has worked in the past, and doing this will provide more guidance than unfettered societal delusions.