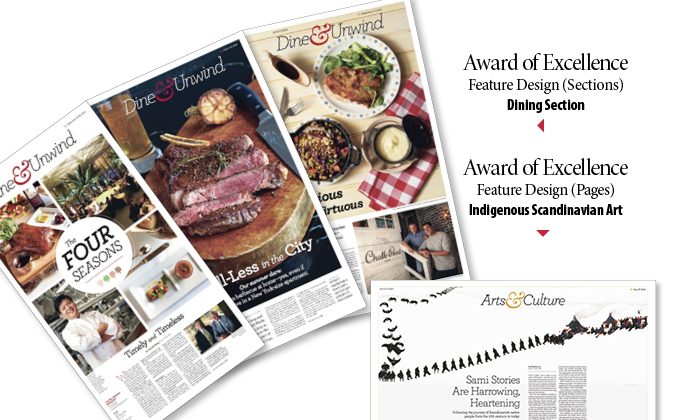 Epoch Times won two Awards of Excellence in the 36th Best of News Design Creative Competition run by the Society for News Design. “This is the premier design competition for newspapers,” said Epoch Times Creative Director Rob Counts. “For us it’s like winning two Oscars.”

Epoch Times won for its Dine and Unwind section (to be rebranded as Epoch Taste on April 17) and a feature story on indigenous Scandinavian art, “Sami Stories Are Harrowing, Heartening.” The competition was fierce, with over 9,500 submissions from some of the best newspapers in the world. Only three newspapers received awards for food feature sections, with prizes also being given to The New York Times and the San Francisco Chronicle.

The Award of Excellence was the highest prize given for a food section. Epoch Times won the only award for a food section in our circulation category. Designer Luba Pishchik said the work on the Dine and Unwind section starts with a conversation with editor Channaly Philipp about what she wants to highlight. Philipp said she trusts the designers implicitly to realize her vision.

The team shares ideas about how to bring alive the feel of the restaurant being featured. This may require a meal or two at one of the best restaurants in Manhattan—nice work if you can get it. “That’s what makes our dining content and designs so beautiful,” said Counts, who works with Pishchik on the section. “We will really see what the restaurants have going on, what their strengths are, and communicate that in the design.”

An overhead shot by Bouaou of a meal at Chalk Point Kitchen is the lead photo for one of the Dine and Unwind submissions. “It just jumped off the page—that overhead shot,” Philipp said. “The restaurant keeps a printout of the article by their VIP table.”

Justin Morgan said the award-winning design for the story on indigenous Scandinavian art “did itself.” The key was the image that editor Christine Lin showed him of a piece of indigenous art depicting Swedish police beating the aboriginals, who were protesting a dam. The painting “was extremely engaging,” Morgan said. “One can look at it and draw different interpretations and perspectives.”

Lin loved the design because it reflects “the Scandinavian aesthetic of being respectful of white space. That is how things were laid out in the gallery—very clean and organic.”

Morgan credits the award-winning effort to the design team’s environment: “It is the most talented design team that I have ever worked on. Because of that amount of talent, you are constantly inspired to push yourself to produce stuff that is world class.” Counts said these awards establish that Epoch Times is in the same league as the top newspapers in the world. “It is a breakthrough for us.”