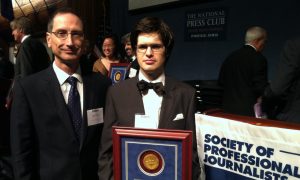 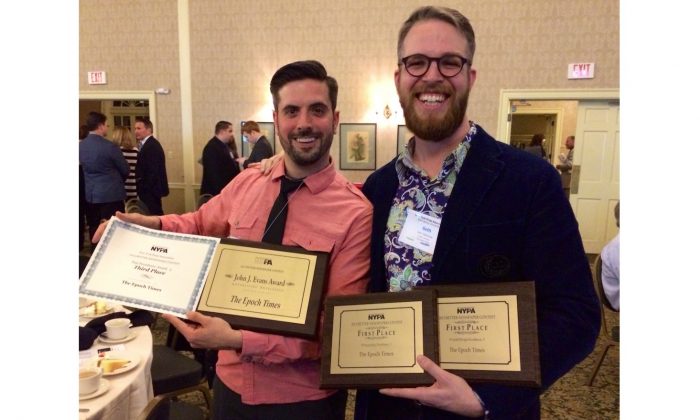 Six of the awards were for the first place, including top honors for overall excellence in photography, design, and advertising.

Philipp followed the trial and conviction of former city comptroller John Liu’s aides and Liu’s connection to the Chinese Communist Party. Stieber examined New York City’s subway system and compared it to those in major cities around the world.

“The awards are, of course, great as recognition from our peers in the industry, and as encouragement for everyone at Epoch Times. I would just point out that the awards are a natural outgrowth of a lot of sustained hard work during the past year,” said John Nania, Epoch Times editor-in-chief.

Nania continued: “We aren’t focused on winning awards per se, but we are focused on bringing a better and better product to our readers, and there is no thought of anyone resting on their laurels now. We will continue to push to bring our readers something better with every article, every photo, and every piece of design, every day.”

The New York Press Association represents more than 900 newspapers across the state.

The full list of awards, including links to winning entries:

Past Presidents’ Award for General Excellence

Judges said: “Stands out above the rest in design, printing, use of photography, creative typography, and overall design.”

“We’re very excited for our first-timer, The Epoch Times, and we’re very happy for our perennial winner, The Record-Review, which has won this award seven times—tying the record set by its sister paper, The Scarsdale Inquirer.”

Make Your Restaurant More Popular Than a Cronut Bakery

Be Seen; Our arts coverage is coveted by serious and sophisticated art lovers

Judges said: “Very creative ad! Fantastic use of art and white space, and gets the message across instantly.”

Judges said: “Some of the best visual elements are the simple ones. There are few major bells or whistles with this page-shaping image, but it ties together very well the concept of Obama’s health care planning and how the ‘play’ fell apart somewhere along the way.”

Judges said: “These issues represent first-rate design and graphics combined with photos that complement the effort. The Epoch Times sets a high standard for clean and informative presentation at a glance.

Judges said: “Extraordinary photography and design carries this complete, complex look at a year like no other.”

Judges said: “Good general news image witnessed by the photographer as the subjects are fully engaged in an environment that blends well with the right moment. Presentation on the pages is beautifully done as well.”

Judges said: “The staff not only looks into the allegations surrounding comptroller John Liu, bit it also exposes his links within Queens to nonprofits and those connections to Beijing. Exceptional reporting.”

Judges said: “Well written and well presented. The series raises important questions about a service that affects millions of people. Who else would help the reader with such knowledge? Nice job.”

Judges said: “Great depth of coverage and great use of pulling reader into the newspaper.”