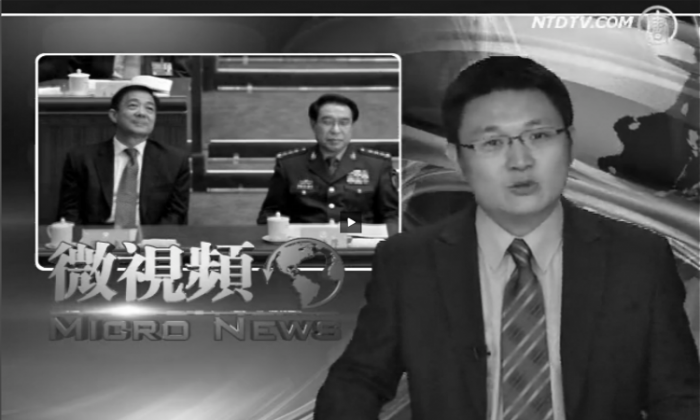 Reporting by The Epoch Times and two of its partner media organizations on the political scandals that have rocked China since February was deemed “accurate,” “timely,” and “comprehensive” by Communist Party authorities, according to a recent internal document that was obtained by the television network New Tang Dynasty (NTD) Television, a media partner of The Epoch Times.

NTD Television is primarily a Chinese-language broadcaster headquartered in New York. It received a redacted version of what it identified as an internal circular produced by a local branch of the Office of the Central Leading Small Group for Dealing with the Falun Gong Question, also known as the 610 Office, named for the date of its founding. That agency was founded on June 10, 1999, to lead the campaign against Falun Gong using all available state resources, and without legal constraints.

The circular said, in part, “After this year’s ‘Wang Lijun incident,’ the domestic and international media run by Falun Gong have in an organized fashion and through multiple channels collected internal information and done the most comprehensive, timely, and also accurate reports. The three main Falun Gong media have established special columns and published thousands of articles, and foreign news agencies have often used ‘Falun Gong’ information.”

The term Falun Gong, the name of a popular Chinese spiritual discipline, was placed in scare quotes, as is common in state media reports. In July 1999, then Party leader Jiang Zemin began a campaign to eradicate Falun Gong. Its practitioners have since suffered persecution, with the practice regularly attacked in official propaganda.

The “three main Falun Gong media” is a phrase used in other Chinese Communist Party documents and refers to The Epoch Times, NTD Television, and the Sound of Hope radio network, three multilingual media organizations based outside of China that report notably on human rights and political issues in China. None of the companies has formal affiliations with Falun Gong.

Chinese communist authorities sometimes attempt to hinder the newsgathering efforts of these media companies and refer to them as “hostile forces.”

“For safety reasons, we can’t reveal the person who passed us this document,” said Wanqing Huang, vice president of news at NTD Television, in a message. “But this person has leaked information to us before, and it has always been rock solid. We are confident that it’s authentic. Obviously the Communist Party is paying a lot of attention to us.”

The Epoch Times, NTD Television, and Sound of Hope, have reported on how a faction loyal to Jiang Zemin had sought to regain power in order to ensure that the persecution of Falun Gong would continue and to avoid being held accountable for the crimes the faction committed in carrying out that persecution.

Bo Xilai was the key figure in a conspiracy that also involved the current security chief Zhou Yongkang, and others. They planned on displacing Xi Jinping from power after he became head of the CCP. That conspiracy was exposed when Bo’s former right-hand man, Wang Lijun, attempted to defect at the U.S. Consulate in Chengdu in February.

Reports have also delved into the harvesting of organs from tens of thousands of living Falun Gong prisoners of conscience, carried out by the security apparatus, with prominent roles played by members of Jiang’s faction.

Reports, editorials, and analyses by The Epoch Times and its partner media companies also accurately predicted future events in the Communist Party, including the sidelining of Zhou Yongkang, and the defanging of his security apparatus, which was given enormous powers under Jiang Zemin.

The three media companies have also reported on the significance of various personnel moves made by current CCP head Hu Jintao and on a rear guard action being fought by Jiang’s faction in what analysts have called an increasingly futile attempt to regain power.

Guo Jun, the editor-in-chief of the Chinese-language editions of The Epoch Times, said that “Jiang’s faction set up a second center of power in China and ruined the legal system. It accelerated the collapse of public morality and triggered the evil crime of live organ harvesting. How can Chinese society be stable?” She predicted that a full revelation of the extent of the crimes against Falun Gong would contribute to the unraveling of the regime.