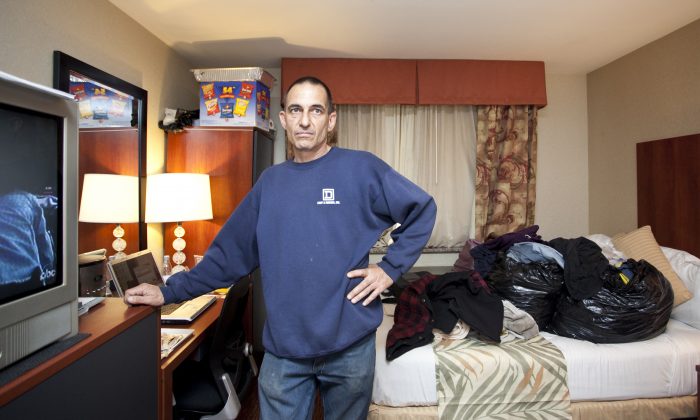 Richard Fabio, a Hurricane Sandy evacuee, in the Ramada Inn on Staten Island, New York, May 7, 2013. He has been living in a hotel since Dec. 22, 2012. (Samira Bouaou/Epoch Times)
New York

NEW YORK—The Newswomen’s Club of New York awarded an Epoch Times reporter for her Hurricane Sandy coverage. She wrote a series of four stories chronicling the experience of evacuees made homeless by the storm and living in a city-sponsored hotel program.

Genevieve Belmaker first started covering the story in April when there were 375 households facing imminent eviction because the city did not want to continue paying to house them. She covered how attorneys for the victims intervened and won a reprieve from a New York court, allowing them to stay.

Belmaker’s series won the Front Page Award for local reporting in the category for newspapers with a circulation of less than 100,000.

Other media organizations winning Front Page awards include The Associated Press, Bloomberg News, The New Yorker, and The New York Times. All the winners are women.

“The journalism profession for women is very, very, difficult, and I really appreciate that there is an organization like [the Newswomen’s Club] that takes the effort to recognize women journalists,” said Belmaker.

The very day Belmaker found out about her award she was working on a new development in the saga of the evacuees—events that transpired long after the stories submitted for the award. Now down to 94 households, the evacuees faced eviction again, and this time the court had ruled in favor of the city.

Belmaker had heard from some of the evacuees that they were being offered accommodation by Samaritan Village. It is a nonprofit human services agency with more than 20 locations across New York City and beyond, offering programs for substance abuse, veterans, and homeless individuals.

Some of them were going to tour the facilities, and Epoch Times reporters were on the scene. After the Samaritan Village bus did not show up, evacuees began learning that an anonymous donor had given $1 million to allow them to stay longer.

Belmaker, who has a young son, said she always empathized with the evacuees, especially those with children.

During her reporting, she was also in the process of looking for a new home. Living in an expensive sublet and needing to move herself, she faced the same broker fees and large damage deposits typically required to secure a place in New York City.

“I understood that feeling of total fear and dread of not knowing where to live,” Belmaker said.

Belmaker felt her reporting had an impact when she learned that attorneys for the evacuees did not know that federal aid money that could pay for hotel rooms was just two to three weeks away.

Belmaker had the tenacity to phone the Federal Emergency Management Agency (FEMA) repeatedly to clarify when money would arrive. The money was part of a larger $1.8 billion aid package for Hurricane Sandy recovery.

“Everyone was asking this question: When will it come?” Belmaker said.

When she phoned the defense attorney, he did not seem to know about it, Belmaker recalled. The attorney then cited the incoming money as an option for the city.

Judge Margaret Chan also cited the federal money in her May decision ordering the city to continue to pay for the evacuees to stay in the hotels.

During her reporting, Belmaker decided to report on how the evacuees lived in the hotel rooms. Her and Epoch Times photographer Samira Bouaou documented the lives of some of the evacuees, such as Richard Fabio, who “darts to the bathroom sink to fill his coffee machine with a small water bottle,” and Alycia Sapp, who lives with her twin 18-year-old daughters, one of whom recently gave birth.

Most recently, when the donor money came in, Belmaker and Bouaou were there to photograph the moment some of the evacuees learned that they could remain in the hotels. A large number of them were days or weeks from finally moving into a home, and now they could make the transition safely.

“I feel like the story is important because these are people who lost their homes in Sandy,” said Belmaker. “They are not homeless people,” she added. “They are Hurricane Sandy victims.”