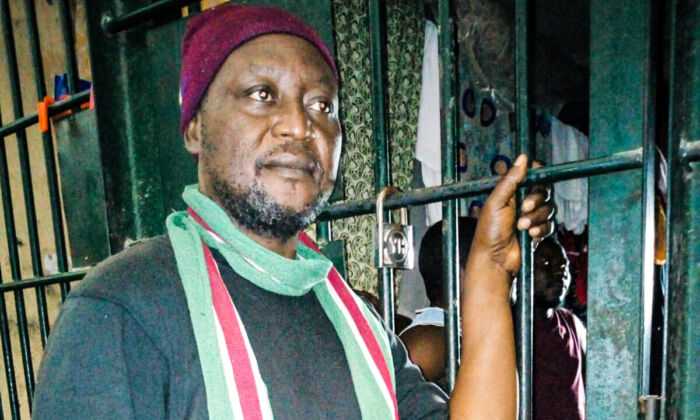 Religious freedom advocates in Washington are protesting the Nov. 4 jailing of Epoch Times reporter Luka Binniyat, who has been at the forefront of reporting the atrocities against Nigerian Christians.

“This is an alarming development. If a journalist, reporting on the government’s refusal to prosecute those engaged in religious-motivated atrocities, has been arrested for his [reporting], this would be further evidence that the government of Nigeria is complicit in the ongoing egregious and systematic religious persecution in Nigeria,” Tony Perkins, president of the Family Research Council, told The Epoch Times.

The charge against Binniyat likely will be “injurious falsehood and incitement,” according to Reuben Buhari, a fellow freelance journalist and friend, who visited Binniyat on the afternoon of Nov. 6. Buhari said the arrest is likely linked to Binniyat’s most recent story in The Epoch Times, “In Nigeria, Police Decry Massacres as ‘Wicked’ but Make No Arrests.”

Binniyat will likely face official charges at a court hearing on Nov. 8, according to Buhari.

“It is an outrage against justice that Nigeria’s authorities let violent Fulani extremists who destroy village after village go scot-free without investigation, prosecution, or punishment, while being quick to fill the jail with the brave journalist reporting on these massacres of innocent civilians,” Nina Shea, the Hudson Institute’s director for religious freedom, told The Epoch Times.

“The recent arrest of Luka Binniyat—after he reported on the massacres for an American media outlet—continues a systematic government cover-up of Fulani atrocities against peaceful Christian villagers.

“This is further evidence that an ethnic-religious genocide is being carried out in northern Nigeria and is being done so with official collusion. Unless President [Muhammadu] Buhari, himself the son of a Fulani chieftain, ensures Binniyat’s immediate release and brings an impartial case against the terrorists, Washington must act.”

The story in question centered on the fact that police and military officials have failed to make any arrests a month after the horrific massacre of 38 unarmed men, women, and small children in the village of Madamai, in Kaduna state on Sept. 26.

“I have not been briefed about any arrest so far on the sad violence in Madamai last month,” Police spokesman Mohammad Jaliga told Binniyat for that story published Oct. 29. “If there was any arrest, it would be well celebrated by us, and we would parade the suspects for the public to see so they can know that we cannot tolerate such acts of wickedness in Kaduna state.”

In the story, Binniyat pointed out that police spokesmen used the word “clash” to describe one-sided attacks of heavily armed men against unarmed men, women, and children. More than a month after the massacre, Kaduna police have made no arrests, made no prosecutions, and provided virtually no explanations.

Binniyat has been an embattled journalist since he was jailed in Kaduna in 2017 on several charges, including “breach of the peace,” according to the Committee to Protect Journalists (CPJ).

“Charging a journalist with ‘breach of the peace’ simply for informing the public is unacceptable, and arbitrarily throwing him in prison when he appears for a hearing is outrageous,” CPJ Africa Program Coordinator Angela Quintal said in July 2017.

Binniyat is among several working journalists known to be critics of the government who have been charged with “incitement.” Some, such as internet journalists Steven Kefas and George Makeri, file their reports from undisclosed locations in Nigeria’s Middle Belt states for fear of being arrested and held for months without bail.

Journalist Jones Abiri was held for two years in secret, underground prisons. Abiri told The Epoch Times he isn’t at liberty to speak about his prison experience, since a prosecution against him is ongoing.

When Kefas got out of a Kaduna prison in 2020 after a five-month stay, he was ill with tropical diseases, including malaria. Even the late Obadiah Mailafia, formerly a high government official, was arrested in fall 2020 and was filing his opinion pieces in 2021 while in hiding until he passed away at an Abuja, Nigeria, hospital in 2021.

“Broadly speaking, freedom of the press in Nigeria is under threat when journalists fear that they will be detained for their work,” Rozen told The Epoch Times.

Binniyat was credited as one of a handful of Epoch Times reporters whose factual reporting of atrocities caught the eye of Fox News war correspondent Lara Logan.

More than 43,000 Christian citizens have been murdered by radicalized Islamist mercenaries in the Middle Belt or by heavily armed insurgents tied to the Nigerian branch of the Islamic State of Iraq and Syria (ISIS) since 2015, according to Logan’s documentary on Nigeria’s carnage that began streaming on the Fox Nation site on Sept. 27.

The religious cleansing in Nigeria that Logan documented has gotten scant media attention in the wider world. On the other hand, Logan’s documentary may be bringing more attention from the West to the victims.

“Lara Logan’s film mentioning the work of Binniyat and other Epoch Times journalists may have gotten the attention of Nigerian authorities,” said Dick Andzenge, an immigrant from Nigeria and a professor of criminal justice and victimology at St. Cloud State University.

Douglas Burton
Douglas Burton is a former U.S. State Department official who was stationed in Kirkuk, Iraq. He writes news and commentary from Washington, D.C.