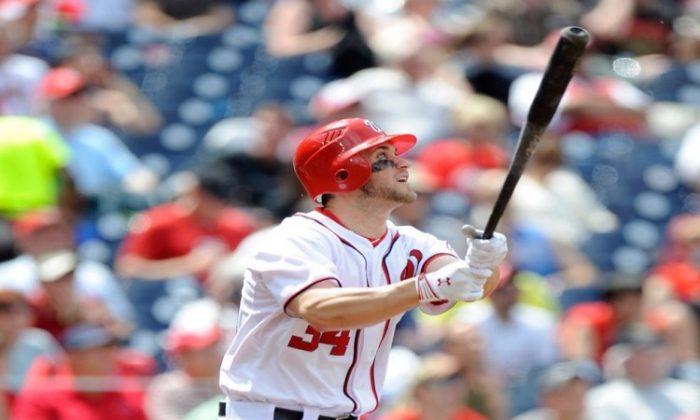 With just a week and a half until Memorial Day the baseball universe still seems upside down. The Baltimore Orioles, who’ve finish in last place four straight seasons, are currently in first-place in the AL East, while the once-mighty Red Sox are occupying the Orioles’ customary spot in the basement.

After hits in seven of his last eight games new Angel Albert Pujols’ average is finally above .200, while his home run pace (three so far and two in his last two games) puts him on pace for a whopping 12 this season—far below his career-worst of 32 set in 2007.

Heading into the first round of interleague play (starting Friday) here are the Epoch Times Power Rankings:

10. Cincinnati Reds: 19-18 record; 3.9 runs scored, 3.9 runs allowed—The thus-far consistently mild Reds have yet to win or lose more than three games in a row this season and have allowed as many runs (144) as they’ve scored. The good news for the team is that slugger Joey Votto has found his power stroke again. Votto, who has hit an average of 29 home runs the last four seasons, has hit four out this week alone to triple his season total to six. In Votto’s defense the hard-hitting first baseman already has an NL-high 35 walks thus far as pitchers have had success pitching around him this season. Previous: 8

9. New York Yankees: 20-17 record; 4.8 runs scored, 4.5 runs allowed*—Although the Yankees’ record doesn’t quite reflect it, the team is playing well, despite their circumstances. Andy Pettitte has returned to the rotation to counter for the loss of injured starter Michael Pineda. Slow-starting Robinson Cano is hitting .357 in May to move his average past .300 for the season. And despite injuries to the team’s first two closer options (Mariano Rivera and David Robertson) the Yankees still have Rafael Soriano, who had 45 saves in 2010, to close out games. Previous: 6

8. Cleveland Indians: 22-16 record; 4.5 runs scored, 4.6 runs allowed—The only team on this list that’s actually allowed more runs than they’ve scored for the season, the Indians are an astounding 9-1 in one-run games on the season. Even more amazing is the performance of their top starter Derek Lowe. The 39-year old veteran is 6-1 with a 2.05 ERA in 8 starts thus far. Previous: 10

7. Baltimore Orioles: 25-14 record; 4.7 runs scored, 4.2 runs allowed—The first-place Orioles continue to surprise the baseball world with their unexpected start. Though Tampa Bay came out of nowhere to become contenders in the same division in 2008, the young Rays had a talented young pitching staff and the organization itself was lauded for their incredible minor-league system the year prior to that. Baltimore, now a respectable 8-6 against Boston, New York, and Tampa Bay has scored the third-most runs in the American League despite the slow start by right fielder Nick Markakis (.247 average). Previous: 9

6. Atlanta Braves: 23-15 record; 5.3 runs scored, 4.4 runs allowed*—After a 0-4 start to the season the young Braves have quietly been one of the hottest teams in baseball. Atlanta boasts four starting pitchers with an ERA under 4.00—and three of those starters (Tommy Hanson, Brandon Beachy, and Randall Delgado) are under the age of 26. Thirty-six year-old starter Tim Hudson is still going strong (2-1 3.96 ERA) on the mound while 40-year old Chipper Jones (.298, 5 home runs, 23 RBIs) is having his best season since 2008. Previous: 4